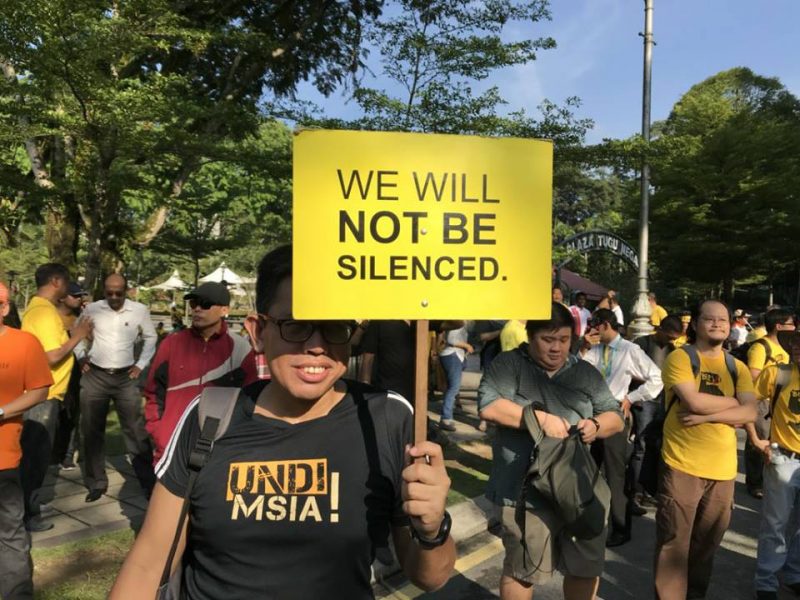 Malaysian group Bersih during one of its rallies calling for a clean and honest electoral process. Source: Facebook

The BN-led government was headed by Najib Razak who was linked to several corruption [3] scandals. Razak also became more unpopular as he tried to suppress [4] the demand for accountability and transparency with regard to these corruption allegations.

Malaysia will now be led by 92-year-old Dr. Mahathir Mohamad who served as prime minister for 22 years until his retirement in 2003. He became active again in politics to lead the Pakatan Harapan (PH) opposition party in challenging Razak and the ruling coalition he once led.

The final tally of the GE14 reflected the dissatisfaction of most Malaysians to the performance of Razak's government. Many Malaysian netizens celebrated the news about the historic voting result:

Can you believe it?

How poignant.. we'll see a new Malaysia greeting us.

Today, history has been made ??

On his first day in office, the new president tweeted:

First day on the job… once again. pic.twitter.com/Oxe3E8OEuU [8]

He vowed to investigate [10] agencies involved in corruption. He also reaffirmed the pledge [11] of the opposition to abolish repressive laws, taxes, and programs.

“We also want to abolish laws that are oppressive and unfair. We will abolish the fake news act…” – Dr Mahathir. #GE14 [5]

Malaysiakini, an independent news website, highlighted [13] the importance of the opposition victory:

This is the day Malaysians experienced the power of the ballot.

Anger towards the current administration had brought them out in large numbers to cast their votes in the historic 14th general election.

This is the first time the country has witnessed a change of government since independence from the British in 1957.

The paper made a point to remind the new government of urgent reforms necessary to ‘heal’ the nation:

Now the hard work begins. No one should be under the illusion that a new government would be able to reverse the rot that had taken root for decades.

For a country that is so divided, it would take time to heal the wounds, and for Malaysians to rebuild the trust for one another and for the many institutions that have failed them.

Aliran, a civil society group, also celebrated [14] the outcome of the GE14 while enumerating some of the challenges faced by the new government:

Aliran salutes the people of Malaysia who rose up, braved the odds stacked against them and used their vote to make this happen. We salute too the many women and men who worked (many of them for decades) in bringing about the awareness necessary for this change to take place.

The outcome of the general election is a testament to the power of the people to bring about change. Around the world, Malaysia has set a good example – that of People Power and that of a peaceful transition of government.

PH must work towards dismantling the many structures which have kept the corrupt in power for so long. This also entails, among other things, curbing the power of the executive and the restoration of other institutions badly tainted by political interference.

This tweet summarizes the sentiment of many a day after the historic GE14:

Even with PH winning, changes will not happen immediately. There's still so many things to be fixed so we gotta be patient enough for when that happens. Let's focus on maintaining peace and keep things in view for a better tomorrow, for a better Malaysia. #GE14 [5]