Hijabs and mini-skirts: What not to wear in Tajikistan 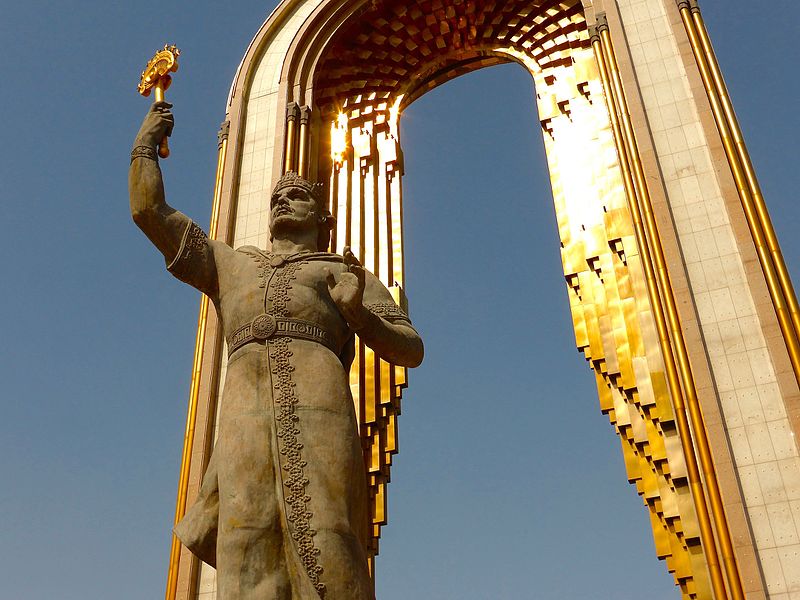 Ismoil Somoni, the founder of the first Persian-speaking empire after Arabs conquered the Persian world. King Somoni is now in the centre of the new Tajik identity. His monument is located in downtown Dushanbe, capital of Tajikistan. Photo by Kalpak Travel, cc-by-2.0

There are companies that require staff to wear a certain style of dress. There are schools where a certain form of dress is mandatory. There are events which include a note on the invitation suggesting the style of clothing guests should wear. And there is a country which is trying to implement a dress code for its women, dictating everything from what they should wear at home to the garments they should wear at public events, concerts, in public buildings, or simply on the street. The country which made the dress an ideological question is Tajikistan, a small piece of the former Soviet Union located next to Afghanistan and China.

What is currently Tajikistan has long been part of the Bukhara Emirate, which was one of the least developed kingdoms in the Middle Ages. It was a vassal of the Russian Empire until the Bolsheviks decided to include it in the Soviet Union and attempted to eradicate religion and national identity in the name of building a new Soviet citizenry. After the fall of the Soviet Union, the newborn country slipped into the civil war, where two ideologies, Communism and Islamism, battled each other mercilessly to claim the throne.

Those fighting against the Islamists won, and have since been trying to build a new national identity. Struggling to find one that fits, the republic has tried on several forms of identity in just two decades. These range from claiming the legacy of the Aryans to attempting to be leaders in the rising popularity of Islam. None fit with state policies, and now this nation of eight million people follows in the footsteps of its former Soviet Central Asian neighbours in building an identity of a modernized and nationalized Tajik that excludes any outer appearance of Islam—including hijab and beards—in a country where more than nine in ten persons identify as Muslim.

The dress code for Tajik women dress has long been a top ideological issue for the government. Starting with banning students from wearing the hijab in schools, it developed into strong “recommendations” against wearing the hijab at all anywhere, including at home. Black “Arabic” niqabs, which cover every inch of a woman's body except the eyes, and the modernized “Turkish” style of hijab now popular throughout the Muslim world, have been linked by the Tajik government to radicalization and terrorism, and are considered a threat to the state and to society. As Tajik president Emomali Rakhmon said, addressing the matter of what women in his country should wear:

Do not bow down to alien values, do not follow an alien culture! Wear dresses of traditional colors and cuts, not black clothes, since even the mourning clothes of a Tajik woman were white, not black

The increasing number of hijabi women and bearded men—something urban Tajiks and those from the elite classes had not seen for decades of life under Soviet rule—in conjunction with rising Muslim radicalization around the world, compelled the state to act. Hijab and beard bans were extended to more public spaces, and while these were met with critiques of “government attacks to Islamic values”, the state extended the ban to include “European dress” as well adding mini-skirts and decollete to the list. Tajik women raised their eyebrows—so, what to wear then?

Right on the eve of spring 2018, the Tajik Ministry of Culture, jointly with the Committee for Women and Family Affairs, published a dress-code guide teaching Tajik women the “ethics of wearing clothes” at weddings, national holidays, at work, on weekdays and on weekends, at home, and etc. The guide, “Recommendations on wearing clothes for women in Tajikistan”, can be bought for around $10. Samples of casual everyday clothes for women include modern cuts of traditional clothes made mostly of ikat. See some samples below: 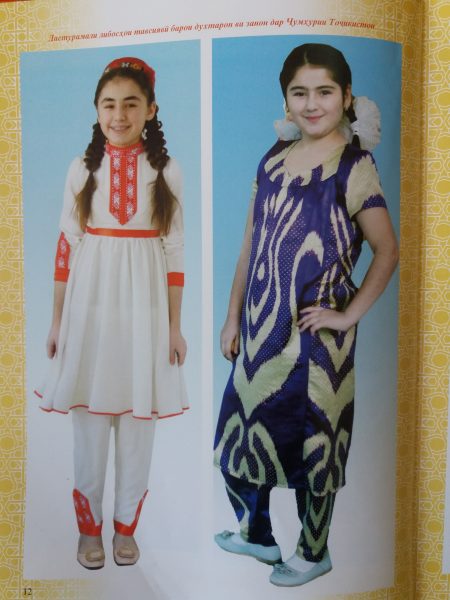 Modern Tajik national dress officially recommended for children aged 7-14. (Picture from the official web-site of the Committee on Women and Family Affairs of Tajikistan) 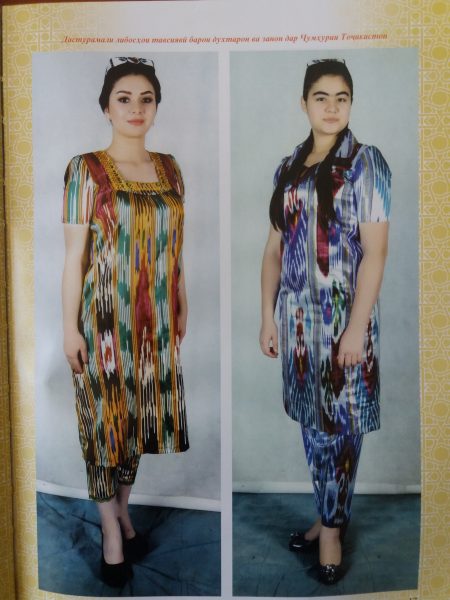 Modern Tajik national dress officially recommended for girls aged 14-17. (Picture from the official website of the Committee on Women and Family Affairs of Tajikistan.) 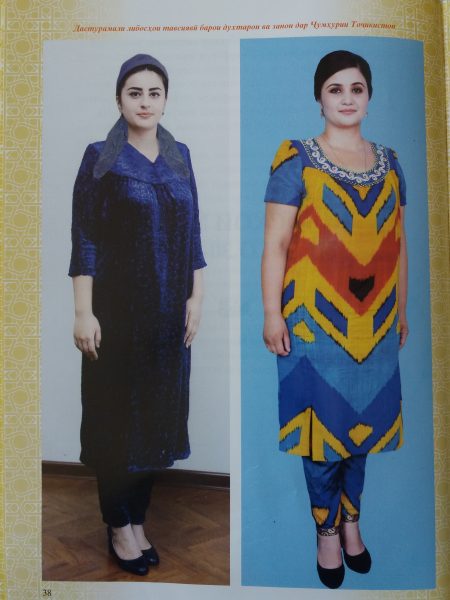 Modern Tajik national dress officially recommended for women aged 18-30. (Picture from the official website of the Committee on Women and Family Affairs of Tajikistan) 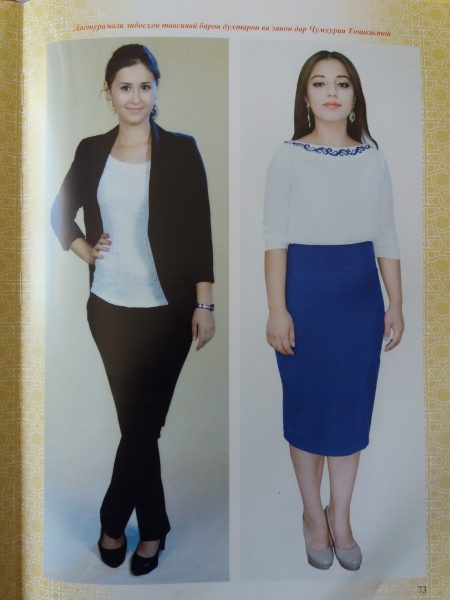 Official and secular dress officially recommended for women aged 18-30. (Picture from the official website of the Committee on Women and Family Affairs of Tajikistan 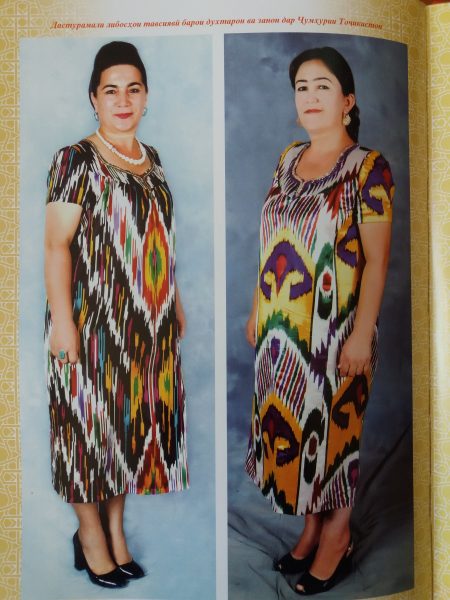 Tajik national dress officially recommended for women aged 30-40. (Picture from the official website of the Committee on Women and Family Affairs of Tajikistan)

Does the word “forbidden” is pronounced as “not recommended” now?

The guide, in addition to recommending what women should wear, includes a list of what they should not wear, which includes “hijab, black dress, black scarf, half-naked European dresses, mini-skirt, decollete, tight dresses making the body's parts visible, synthetic clothes” and etc. Though the authorities say their aim is the promotion of the historical culture of dress, some local conservative men have found the book to contain what they call “immoral samples”:

Is tight jeans really the norm? Where is morality? We are all Muslims and we are proud of this strongly. Our mentality makes us strong and we are respected for it. They recommend women to wear skirts to work. We are not Europeans and we should not strip our women.

Men are in line

Additionally, the book outraged women in the society who have questioned the absence of, and are demanding, equal recommendations for men. A user on the news.tj reacted to the post:

There is definitely gender inequality! Now we need to issue recommendations on how to dress the male population! That would be laughter! It is humiliating for the Ministry of Culture to engage in dressing the female population! It would be better if they performed own direct duties.

After the public response, the Ministry of Culture announced that they will publish a separate book recommending clothes for men.