On May 1, unknown activists hacked the website of Russia's environmental monitoring agency and replaced the front page with an image mocking another government agency's efforts to ban Telegram

Russia's so-called “Digital Resistance” has struck out against the country's internet blacklist, an ever-growing list of websites censored by the Russian government.

Since April 16, Russia's media regulatory agency Roskomnadzor has been trying — with mixed results — to block Telegram, a popular mobile messaging service. Since then, the blacklist, or registry of blocked websites, has grown and shrunk many times.

The collateral damage of their approach has been enormous. Millions of unrelated IP addresses and internet services were blocked when the agency went after internet cloud services that are used by Telegram and plenty of other products, a move that some say could cost Russian businesses up to one billion dollars. Roskomnadzor began removing addresses from the blacklist on May 8, in what appeared to be a tacit acknowledgement of defeat.

Over the past several days, independent developers have created a live-tracker that is showing how many IP addresses are currently being blocked in Russia.

Early on May 5, the tracker registered a curious phenomenon: the total number of blocked IP addresses continuously fluctuated between exactly 47,000 and 55,000. Intrepid observers noticed that this repeating pattern was actually Morse code. The reading spelled out: “Digital Resistance.” 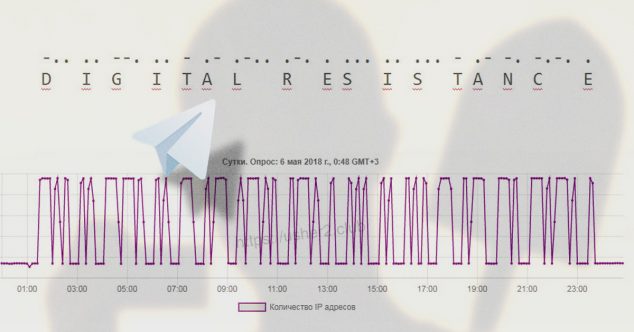 When Roskomnadzor began trying to block Telegram in April, Telegram founder Pavel Durov described the response — wherein many activists swiftly found ways around the censorship — as a “Digital Resistance”.

This resistance quickly spread offline, with thousands taking to the streets in response to this bungled approach to censorship.

This latest manifestation isn’t a full-on hack or change of the Roskomnadzor register, but rather a simpler manipulation. Tech experts say that someone is piggy-backing off of domains that are already on the register and simply adding and removing other IP addresses to these domains. While this does not actually block or unblock additional websites, it does alter the readings of the real-time tracker. The result, when viewed through the real-time tracker, is the “Digital Resistance” Morse code message.

Although some initially suspected it was an inside job at Roskomnadzor itself, the prankster came forward on May 6 and identified himself as Leonid Evdokimov. He told wikinews.ru that it wasn't intended to be a call to arms, but rather as a harmless joke.

The full message on the on the tracker reads “DIGITALRESISTANCE543210VOISTINUPOPOV,” where POPOV stands for Alexander Popov, an engineer who is credited in Russia, ex-Soviet Union and some Eastern European countries as the inventor of radio. The message was intended to play out in full by May 7, which is celebrated in Russia as “Radio Day”.

This isn’t the first time that such tricks have been used to hit back at Russian government agencies. As Roem.ru reports, in 2012, when a website was blocked by a mobile provider, the website’s owner changed the DNS settings to include the Russian Ministry of Justice’s website, thereby blocking it as well.

More recently, the websites of Rosprirodnadzor, Russia’s Federal Service for Supervision of Natural Resource Usage, were hacked to display pro-Telegram messages. Other government websites have vulnerabilities that could soon be exploited to repeat these antics.

With Roskomnadzor seemingly improvising its blocking protocols and opponents deftly exploiting the oversights this creates, it’s clear that the “Digital Resistance” will continue to be a thorn in the Russian government’s side.