‘I wanted my grandchildren to grow up in that house': Testimony of a 61-year-old Syrian woman from Zamalka 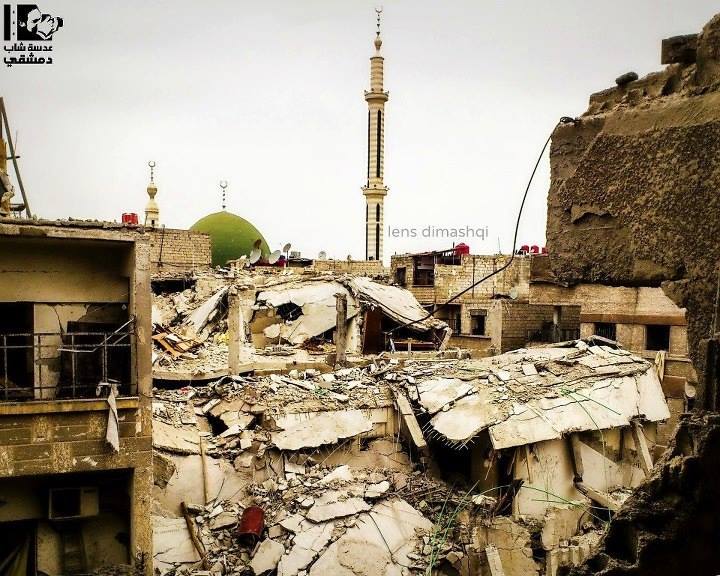 A photo of her destructed house. Taken by Lens of a Damascene Young Man.

This is the testimony of Um Mohammed; a kind, 61-year-old woman from Zamalka. Um Mohammed's kindness reflects of her face with its childish features. Her cheeks still turn red when she is agitated.

Um Mohammed loves old songs and memorizes quite a few. As a loving grandmother, she adores little children and could play with them for hours.

Um Mohammed used to live in Zamalka, a town of Eastern Ghouta. Its population was estimated at 150,000 in the last census.

Zamalka fell out of the regime's control in 2012. Since then it has been subjected to a stifling siege, along with all the towns of Eastern Ghouta. Zamlaka endured continuous heavy shelling daily.

In this testimony, the forcibly displaced Um Mohammed talks about her home and family in Zamalka and about her connection to that house and its furniture:

I have three daughters and a son. My three daughters remained with me in Ghouta, while my son fled seven years ago. The siege deprived me the opportunity to attend his wedding, or to be with him when his son was born.

I lived in the family house. A very old house that my husband inherited from his father who inherited it from his father and so on. Generation after generation grew up in that house. Those of them who are still alive hold so many fond memories of it. Over time, as the house needed renovation, we carried the work while being very diligent so as to maintain its original features. We wanted to preserve its soul.

During the siege all means of fuel became very scarce, or unbelievably expensive. So we had to rely on wood for heating, cooking, bathing and sometimes even for lighting.

As shelling intensified during the last stretch since February, it became impossible to leave the basements and go out to buy wood. The lack of proper ventilation in the basements and the dampness exacerbated the feeling of cold.

One day in that basement, as the shelling was burning the city, we had to use the furniture for heating. I will never forget that mad shelling that burned our memories and the memories of all those around us. It wiped any trace of us in Zamalka, our homeland, before we were completely uprooted.

The first pieces of furniture we burnt were the couches, and this was due to hunger. My grandchildren were hungry, and the extensive shelling prevented us from going outside to get wood. Even if someone would risk their life outside, there was no one selling anything in that hell. My son in law asked for my permission to break the couch to use its wood for cooking fire. I approved, but something inside me was shattered.

That couch carried a beautiful story. My husband bought it ten years after our marriage. He was so happy that we could afford it. We picked it together. It was one of the very few times we were able to go out together without the kids. Yes, I might be able to restore material belongings, but the memories attached to them, how could they ever be recuperated?

The pain was greater when we had to set my bedroom furniture on fire. That bedroom accompanied me for 35 years, ever since I got married. It witnessed the best, and the worst days of my life. The scent of my beloved late husband lingered there. I used to sense his spirit floating around it, that's why I felt he was beside me whenever I fell asleep.

I burnt most of my clothes. For instance that gown I wore for my eldest daughter's wedding. I remember going with her to the tailor and having it tailor made for the occasion, along with her own wedding dress. My own mantles, which became my attire ever since I grew older and became a grandmother. I managed to salvage only one of them to take with me when we are eventually forcibly displaced.

Out of my kitchen utensils that survived the shelling, I burnt all the plastics because they were highly flammable and provided extra warmth. What was important was for my children and grandchildren to eat and feel some warmth.

In our traditions, the bride's family would send with her to her husband's house a glass cabinet where lavish plates and cutlery would be displayed. Usually this cabinet is passed on through the generations. But after all the glassware in my cabinet was shattered due to the shelling, we broke it to pieces and used its wood to warm water for bathing.

Yet the hardest situation I had to overcome was taking the decision to burn my son's wardrobe. My son, whom I haven't seen for seven years.

That wardrobe held all the beautiful memorabilia of his childhood. His toys, his baby clothes, even his favorite cup. I can't carry all that with me on that bus of forcible displacement. But I also can't destroy those memories with my own hands; nor can I leave them behind for strangers to fiddle around with after we were gone, or see them in videos being sold on the streets. Eventually I had to make the decision to break and burn them. I only kept very small items that I could carry with me.

That was the hardest situation of all. For I always dreamed of giving my son his memorabilia back, and of seeing his son wearing his own clothes when he was his age, and of telling that grandson stories about the photos of his father.

I wanted my grandchildren to grow up in that house where I would tell them stories about their parents’ mischievousness. A home that i would pass on to them so they would in turn pass it on to their grandchildren; so that they would add to it a new life every time, just like every generation of our ancestors did.

Towards the end we even had to burn the doors of the house. My house, the family house, my children's house, was left widely open, exposed and violated.

Following the horrible shelling offensive during which the Syrian regime and Russian forces showed us hell, we were forcibly removed from Zamalka as broken refugees. It was impossible for us to live under the regime again. That regime that can detain my sons in law or drag them to military service. It was impossible especially knowing that my son would never go back to Zamlaka.

I left behind the family house and all the memories it nurtured. I left to Idlib with my daughters and their families, broken hearted. The one thing that offered me some consolation was that I was finally reunited with my son whom I didn't see for seven years and I held his son in my arms. The one thing that gives me hope is that I know I will tell my grandson all about his grandfather, his father and the family house with all the memories it nurtured.

Today I live with my son and his family, hopping from one house to the other until we manage to find a temporary settlement post, which I am confident will never, ever, replace my home.