‘Get involved in your communities': An American woman who fought for justice urges stronger activism

A Journey for Justice in the Americas, Part 3: Katrina Johnson's story 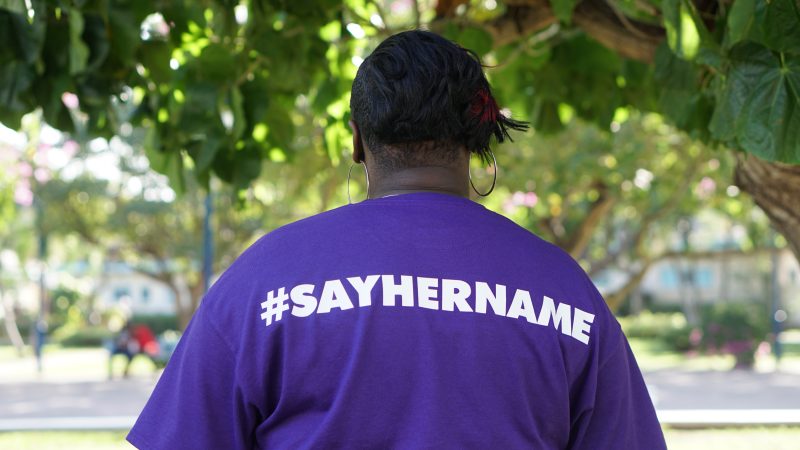 American human rights activist Katrina Johnson wears a t-shirt emblazoned with the hashtag #SayHerName. It is part of a wider campaign by Amnesty International (using another hashtag, #SheStands4Justice), which draws attention to the issue of police brutality and extrajudicial killings in the Americas. Photo by Mario Allen, courtesy Amnesty International, used with permission.

This is the final instalment in a three-part series that features three women — from Jamaica, Brazil and the United States — brought together to highlight the issue of police brutality and extrajudicial killings in the Americas, with the hashtag #SheStands4Justice. They visited Kingston, Jamaica recently to share their thoughts in the aftermath of the death of a family member. Read the first part here and the second part here.

Dubbed “A Journey for Justice in the Americas”, the campaign focused on the persistent legal, social and psychological challenges that many families face after a relative is killed by the police. While the shock of the death itself is bad enough, grief-stricken relatives often find the struggle to get answers from their respective judicial systems difficult and distressing.

Johnson noted that some time after her cousin's death, the police officers responsible were taken off duty. An investigation followed, but before it was complete, the prosecuting attorney told her the officers would not be charged. In the state of Washington, a declaration by law enforcement that they were in fear of their lives was sufficient to grant them immunity from prosecution. The investigators said her cousin — a small-framed woman who had called 911 to report a possible burglary — might have been holding a steak knife.

In the midst of the tragedy, Johnson began helping other families in similar situations through a local organisation, explaining, “I have to grieve and fight at the same time.” She helped form a coalition of citizen and minority groups, trade unions and attorneys, which lobbied for the law in Washington state to be changed. The De-Escalate Washington campaign drafted a submission in May, 2017 (Initiative I-940); by March 6, 2018, there was success.

After gathering over 250,000 signatures to get the Initiative on the ballot, a law was passed that “held police officers accountable for using deadly force unjustly,” said Johnson. The new law also mandates a range of training programmes for police officers, including de-escalation of violence, implicit bias, mental health and first aid.

During her Kingston visit, Johnson called for police reform in both Jamaica and Brazil. She expressed solidarity with her peers, who told of their own struggles at a March 13 forum at the University of the West Indies’ Mona campus. 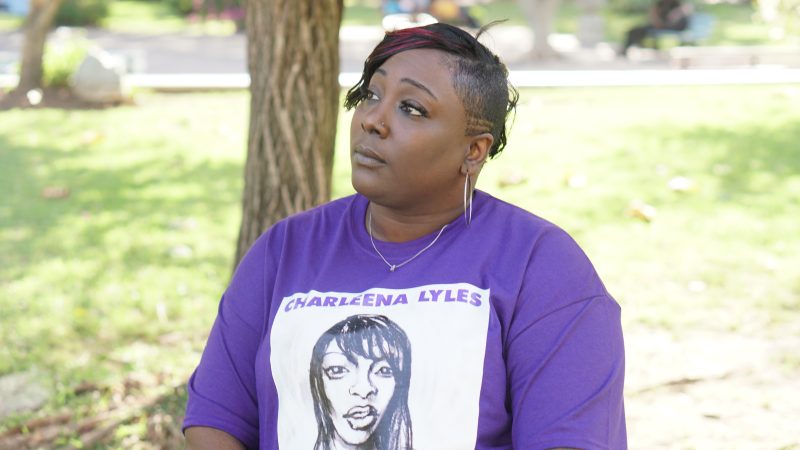 American activist Katrina Johnson, wearing a t-shirt with an image of her cousin Charleena Lyles. Lyles was killed by Seattle police in front of her children. Photo by Mario Allen, courtesy Amnesty International, used with permission.

Johnson (KJ) spoke with Global Voices (GV) about the short- and long-term impact of the experience on her family, and about the need for greater accountability from agents of the state:

KJ: My cousin, Charleena Lyles, was a 30-year-old pregnant mother killed by Seattle police in her apartment, in front of her children. She was shot seven times, including twice in the back. She was killed after she called 911 to report a burglary. The bullets cut through her uterus and hit her foetus, estimated to be 14 to 15 weeks old. The immediate response of my family was shock and disbelief.

No one should have to die like that. She was somebody to us, and her life mattered. Her family deserves answers, her kids deserve answers. I feel like it’s my duty to share her story so that this doesn’t happen to anyone else’s family, and I get my strength from my support system and just the fact that I know that I’m doing the right thing.

GV: In your view, how should the problem of extrajudicial killings be tackled — in your country and across the Americas? What, for you, is at the heart of this issue?

KJ: I think the police need to be held accountable. Without accountability, there is no justice. That’s the biggest problem, no one is ever accountable.

Pleading for greater empathy for families who are suffering, Johnson urges an activist approach:

If it hasn’t happened to you, it’s only a matter of time before it will happen to you, so get involved in your communities and support the people that are out there fighting for your future. If you don’t, and nothing changes, it will end up on your doorstep.

Like her fellow campaigners from Brazil and Jamaica, Katrina Johnson remains hopeful that things will get better:

Yes, I am optimistic. I think with enough [community] support and getting the word out, other people will start to rise up and we will all be able to come together and get some change, which is drastically needed.