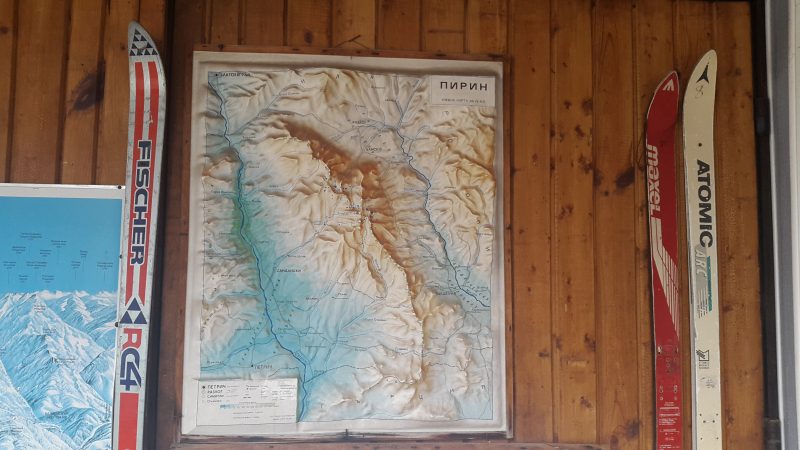 A raised relief map of Pirin Mountain area on the wall of Mountain Rescue Service in Borovets, Bulgaria. Photo by Global Voices, CC-BY.

Environmental activists cheered when on April 26 the Bulgarian Supreme Administrative Court ruled that the government must stop its plans to allow new construction at Pirin National Park, a UNESCO World Heritage Site, without conducting a Strategic Environmental Assessment first.

A coalition called For the Nature had brought the lawsuit and hailed the court's decision as an important step in their fight to protect the treasured piece of nature.

According to WWF-Bulgaria, a coalition member:

The threat to Pirin National Park has incited a five-month-long wave of protests across Bulgaria and abroad. The latest round took place in Sofia, Blagoevgrad, Plovdiv, Sliven and London on April 26, in which participants also demanded protection of natural heritage in the Black Sea area.

The court ruling overturned the decision by the Bulgarian Ministry of Environment and Waters to accept a draft management plan for Pirin National Park for the period 2014-2020 without a prior Strategic Environmental Assessment, allowing construction of new ski facilities near the town of Bansko.

The activists who initiated the lawsuit say such development will jeopardize the whole park and is in direct violation of EU Directive 2001/42/EO, which requires that an environmental assessment must be made in cases of decisions affecting tourism, forest industry and biodiversity.

The court argued that without conducting the required environmental assessment, “the Ministry had no basis to make a proper estimate whether the actions from the plan would have an impact on the environment or not.” The three-judge panel noted that such assessment must be based on the criteria of the Environmental Assessment Regulation, which had not been the case so far.

Even though they briefly celebrated the Supreme Administrative Court ruling, Bulgarian environmental activists are cautious to consider it an end to their struggle to #SavePirin, as they are aware that powerful financial interests would like to claim the land for their tourism projects. For one, legally the ministry has two weeks to submit an appeal, which would be submitted to a five-judge panel.

Mainstream media in Bulgaria are mostly run by oligarchs and haven't exactly championed the cause, either, presenting protests as insignificant and sparsely attended. For instance, one recent article calls the activists “the green bribers” (Bul. зелени рушветчии).

Bulgaria is last on media freedom in EU and in the Balkanshttps://t.co/TdCRdOaPf7#EU2018BG #SavePirin