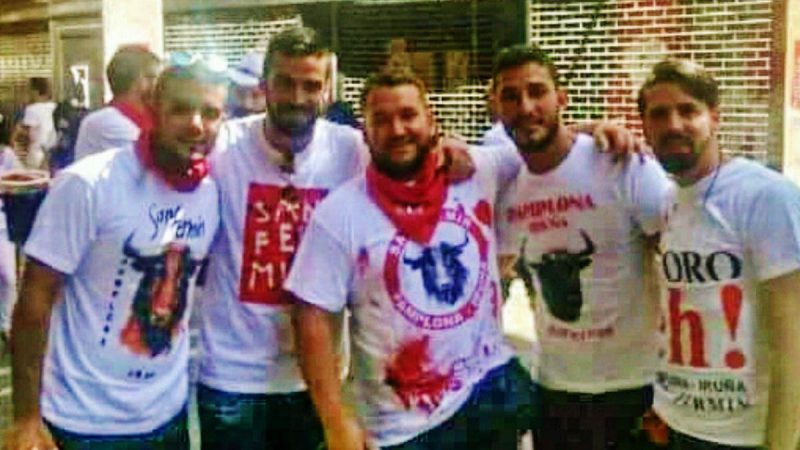 The Provincial Court of Navarra in Spain recently announced its verdict in the case of “La manada” (“the pack”), a group of five young men accused of gang-raping a woman in July 2016, during the Festival of San Fermín in Pamplona. The group was also accused of stealing the victim’s mobile phone, filming the attack, and sharing it on social media, which led to charges of violent robbery and violations of privacy.

Each of the five men was sentenced to nine years in prison and another five years under supervised release. They also must collectively pay 50,000 Euro (US $60,400) as compensation to the victim.

The group has been convicted of sexual abuse, but not rape. Sexual abuse is considered to be a less serious crime with significantly lighter sentences. The public prosecutors called for 22 years in prison for each of the accused, who include a member of the armed forces and an agent of the Spanish Civil Guard. Pamplona Council and the Regional Government of Navarra also called for 26 years in prison as private prosecutors.

The “La manada” trial has sparked large protests in Spain with demonstrations of thousands of people under the rallying cry of “Sister, I believe you.” The recent verdict also gathered hundreds of people in front of the Provincial Court of Navarra, who burst into protest immediately after the sentence was announced:

15 Spanish artists respond to the sentence with their artwork

Tweet image: “This is a pack. These are rapists”

Tweet text: Dear friends, read this well and join the protest. This touches all women and women should not be touched by this. Enough already. I think that the judge’s sentence is as chauvinist as the attitude of the pack. Immoral, unacceptable, shameful. Zero tolerance

Tweet image: Misogynistic scandal : She was 18 ; raped by 5 men; drunk, 10 years older and with precedent; they planned it on Whatsapp; they recorded the events; they commented it on social media; the courts question you; did you resist?; they judge that it was not rape

Many of those who resisted did not manage to survive
Do we have to choose between being killed and staying quiet?
SISTER, I BELIEVE YOU

Tweet text: The sentence of La Manada hurts us all #IBelieveYou. Yesterday, Spain learned the sentence for the “La Manada” crime. A group of five men cornered and raped a woman, and then filmed and shared it. However the courts decided that it was not a rape

Have five guys put it in your mouth, anus and vagina at the same time, in early morning in a doorway, while they cheer each other and repeat “my turn, my turn!”, ejaculating inside of you, without saying a word to you and you ending up alone in hospital – without my mobile phone because they have stolen it from you so that you cannot alert anybody – being looked after by police, doctors, and psychologists, in Spain it is not considered a rape.

Before the fate of the five was known, feminist movements warned that they would hold new demonstrations if the accused men were acquitted or given light sentences. Zaida Cantera, deputy of the Spanish Socialist Worker's Party (PSOE) and herself a victim of sexual harassment in the army, said the following about the possible sentence:

It would be raising the flag of the culture of permitted rape, and the consequences of impunity for rapes would be devastating

The accused men have been declared guilty in a verdict that has taken more than five months to announce. The court that tried the case is often slow in its decisions, due to a large number of cases and meticulous judges who often deliberate at length and in detail on their decisions.

In this case, disagreement between the judges delayed the ruling. One of the judges expressed a dissenting opinion calling for the acquittal of the accused. The defense had called for an acquittal, and the accused have announced their intention to appeal the decision.

New protests against the sentence which acquitted “La Manada” of rape

This post was updated on May 2, 2018 GMT 12:05. A previous version of this story incorrectly stated that the group of men known as “la manada” were found guilty of sexual assault and that Zaida Cantera was also a victim of the same crime.