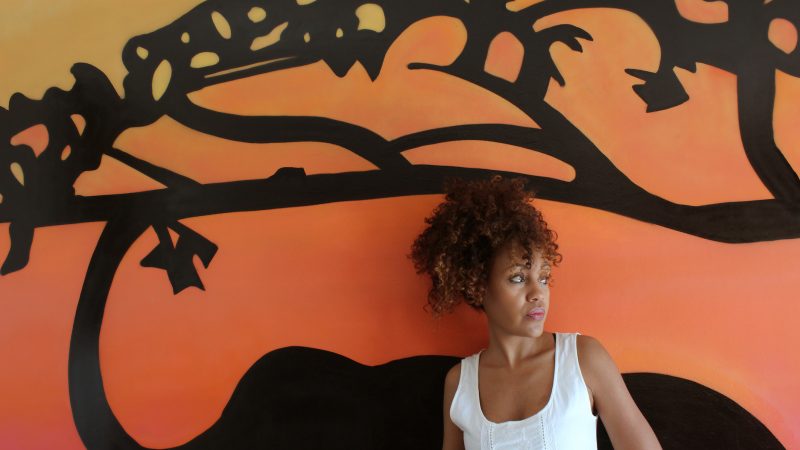 Below is the second part of Global Voices’ interview with Lucía Asué Mbomío Rubio, a journalist and Afro-activist from Madrid.

In the first part, we addressed the challenges of discussing the inequalities experienced by Afro-descendant people in Spain and the importance of context in conversations about identity and privilege.

In this post, we'll go into depth about Mbomío's contributions to the fight against racism in Spain, her thoughts about blackness, and her work as an activist.

Global Voices (GV): Some people think that interracial couples represent a possible solution to racism. What do you think?

Lucía Asué Mbomío Rubio (LM): It's not true. The idea is not that you start dating a non-white person to cure your racism, but that you've done your homework, scrutinized your privileges and discriminatory attitudes on your own, because if you haven't, when you get together with someone they will all come to the surface.

Not long ago, I wrote a text about white men who date black women but stereotype, exoticize, and hypersexualize them, and I called it “To you, black woman eater.” A guy angrily wrote me on Instagram saying he had been with two black women, one was the mother of his child, and both had left him for men who had more money and were older than him, so maybe it was black women who were no good. Obviously, not everyone is like that, in fact, my words were directed at a very specific kind of man (let me repeat: the kind who stereotypes, exoticizes, and hypersexualizes), not at all white men who have a black partner, but he decided, betraying the fact that he was right to take it personally, that all black women were opportunists, or rather, that we're all the same. What I said before, a black woman eater.

GV: Let's talk a little about the impact that digital Afro-activism is having in Spain. Two examples come to mind: the online community Afroféminas and the YouTube channel Negra Flor. What do you think of them?

LM: First, I want to congratulate Afroféminas and Negra Flor (Desirée Bela-Lobedde) for their dedication and because, really, despite the fact that Afro-activism is something that goes way back, as this article by Antumi Toasijé demonstrates, right now it's blooming on the internet, nurtured precisely by the existence of channels that make it possible for the current critical discourse to travel further, reach more people and, therefore, have more impact on the present and future.

I say this last bit because the problem with the activism of previous eras was that in general, due to the lack of means of amplification (YouTube, self-publishing, etc…), it didn't pass on a legacy that allowed younger people to know what had been achieved in the past in order to build upon it, starting where those before them had left off.

GV: You have your own YouTube channel called “Nadie nos ha dado vela en este entierro” [an idiom in Spanish that translates to “Nobody has given us a candle at this funeral,” meaning “We haven't been given the right to speak”]. What is your goal? What motivates you to link the stories of these people together? Why interview them and not others?

LM: My goal is to talk about identity with African and Afro-descendant people who live in Spain. As a result of what has happened with the Catalonia issue, there has been a lot of talk about nationalism, a sentiment or idea (or both) that many Afro people from here find impossible to profess, or at least not with the same fervor, because they/we have never felt like they/we are from the place where they/we were born or grew up due to constantly being questioned.

As Déborah Ekoka, one of the interviewees, says, if people ask you so often where you're from (even more than ‘what's your name’) it's because they assume you aren't from here. And if we aren't from here, where are we from? Or where do we feel we are from? These three questions are the starting point for the conversations that take place within this project. From there arise ideas of idealized homelands based on skin or artistic/cultural movements, places that we call home and have never been (or have been, but for a brief period of our life). There can also be a greater attachment to territorial units that are more comprehensible than a country, such as towns or neighborhoods, because there we do feel recognized and such, in response to a generalized sense (among my interviewees) of national detachment.

My eventual goal is to learn what forces work to shape your sense of self and, later, to focus on the role that the media plays in it. I launched the channel relatively recently (in October 2017, if I recall correctly). The idea is, whenever I have time, to interview a lot of people. There aren't any prerequisites for participation except being African/Afro-descendant, wanting to participate, and coming to my house, where I normally do the interviews (hahaha). In the long-term, I would like this to serve as a basis for my doctoral thesis.

Interracial love in a time of Franco

According to Mbomío, her Spanish-language book “The Women Who Dared” (“Las que se atrevieron”) began as a tribute to her mother and the numerous other women who broke norms with their romantic relationships.

The book is largely based on stories of women who lived under the military dictatorship of Francisco Franco, a period of heavy political and social repression in Spain that began after the civil war and lasted until the mid-1970s.

GV: If you weren't Lucía and someone assigned you to write a review of “The Women Who Dared,” what would be the three main arguments, ideas, or points that you would highlight?

LM: I still get so embarrassed talking about my book that I couldn't possibly put myself in other people's shoes and describe it… I never thought that our stories, those of black people who were raised in the outskirts of Madrid (with all its connotations of class), who didn't even grow up or haven't spent much time in Africa, could be enjoyed. In general, the tales we were told as children in school didn't have protagonists that looked in the least bit like us, nor did the movies we saw in our adolescence or the books we were assigned to read in university.

To tell our own stories is more than an exercise in courage. It's diving off a cliff, often times in the belief that there won't be any water below.

To realize that there is, in fact, water and that you can swim, and you find hugs, praise, and, above all, a sense of identity is something incredible. I'm pleased when people like me say they finally recognize themselves in the pages of a book. I'm surprised that people who aren't like me can also identify with ‘The Women Who Dared.’ It demonstrates the strength of the stories, even though it has frequently been said that they might not have the same pull because of many people's inability to empathize with others who don't physically resemble them (as if those of us who aren't white haven't been doing it forever).

About the connections that the book makes between reality and fiction, Mbomío says:

Departing from the real interviews, I fictionalize some parts and speak about white Spanish women who met their partners (black men from Equatorial Guinea) in the Franco era and discovered racism by virtue of being with them (many of the women were abandoned by their families because of their opposition to the union) or when their children were born.

My idea was to question terms that are like prisons, such as inter- or multiculturalism, mixed couples, or second-generation immigrants, and address existing racism from other points of view.

And finally, she says about privilege, its complexities, and the blindness it can cause:

There are those who ask me why it's called ‘The Women Who Dared’ or why not do the same thing with white men who were with black women.

The balance of power wasn't the same. A white man, and even more so with Guinea still a colony at the time, was at the tip of the pyramid of privilege, while a black woman was at the base.

In the case of my book's protagonists, my mother among them, although they were in the middle of that pyramid, they couldn't even open a bank account without the permission of their parents or their husbands. The minute they fell in love, they broke the unwritten rules of an ultra-prudish society that looked down on the black men they desired as a partner, that thought they deserved something better.

For their part, the men [in these relationships] were far enough away from their families to be able to marry whomever they wanted. Sometimes it turned out well, other times it didn't, but I understood it was fundamental to make the book about the encounter of human beings, which has been happening since the dawn of time. Even more so in the Iberian Peninsula, where along the southern coast you can see the lights of Africa.

Mixing isn't new, it isn't modern, it isn't cool. It simply is, has been, and will be.