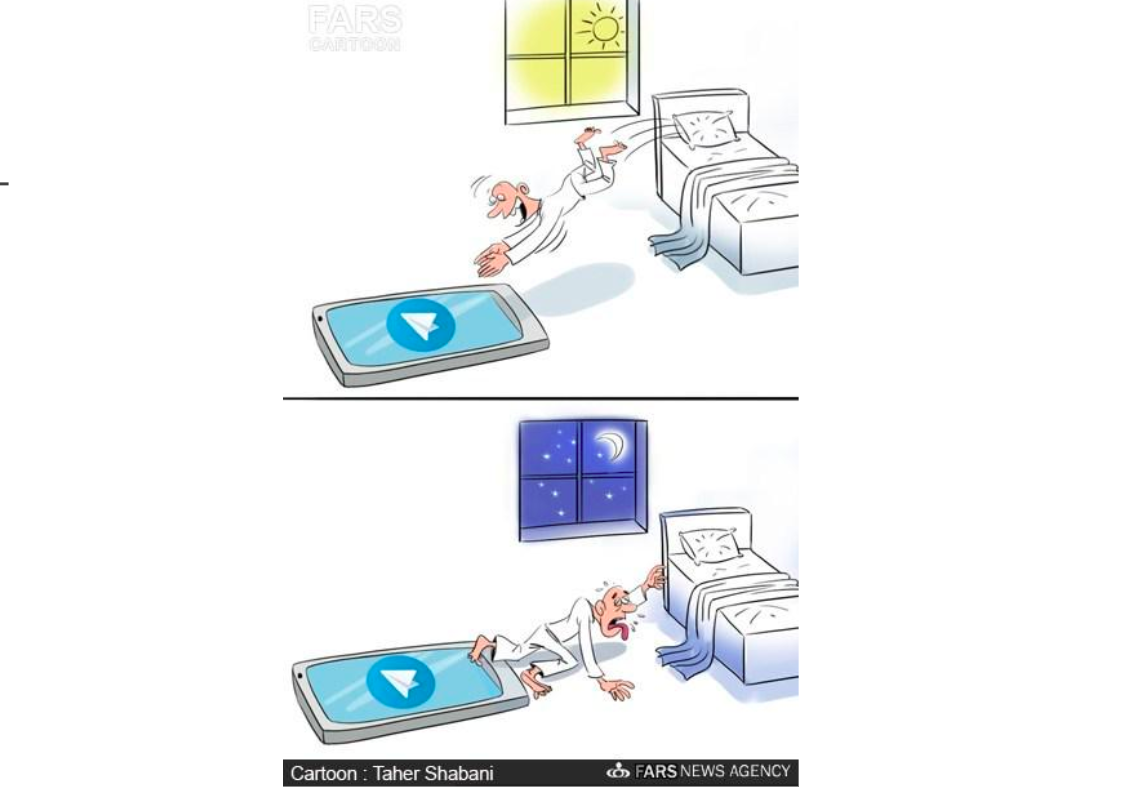 A cartoon from the semi-official state news website Fars News, depicting a Iranian user drowning in Telegram. Image published with the intent to redistribute.

Recent discussions surrounding Telegram's imminent censorship amongst Iranian officials have rattled Iran's “filternet,” or its controlled and restricted Internet space, like never before.

The parliamentary National Security Commission announced at the end of March that Telegram would cease to be accessible in Iran by the end of April 2018.

Since 2015, the popular mobile messaging app has become a key communications technology inside of Iran. While internet penetration hovers around 50 million, Telegram users number around 45 million in Iran.

Telegram's exponential growth in Iran has raised key concerns about the privacy of its users and elicited increasing pressure from the Iranian government to try to control the platform.

The issue came to a brief fever pitch during the protests that erupted across the country during December 2017 and January 2018 when the government temporarily censored the app. But Telegram has been a bone of contention for some government officials for years.

The Committee Charged with Determining Offensive Content within the Judiciary has deliberated on Telegram multiple times since October 2015, with concerns over the “immoral” content and misinformation that is rampant on the platform. However, it seems that pushback from moderate and reformist politicians, especially those attached to President Hassan Rouhani's administration, were previously able to prevent the platform from becoming censored.

Although the app has not yet been blocked — by all accounts, it is as usable as ever — statements about Telegram coming from officials within the Iranian government, and from across the spectrum of political factions, nevertheless seem to be driving Iranians to use Telegram less and less.

For example, on March 12, the head of the Supreme Council of Cyberspace (SCC), Seyed Abolhassan Firouzabadi, expressed the following:

Of course, on this basis people should make sure that their educational and business activities are not dependent on external platforms. These external platforms may be temporarily or permanently filtered at any moment because of their non-compliance with the laws of the Islamic Republic of Iran. For this reason, we recommend that people, especially those with sites with lots of users, switch to Iranian messengers.

Many others in power shared his sentiment pushing Iranians away from Telegram–and towards local alternatives–through the fear of censorship.

The most influential statement, however, came from Ayatollah Ali Khamenei, Iran's supreme leader and the ultimate arbiter of Iranian politics and policy, who often has the final say in major national policy decisions.

So when on April 18 Khamenei posted on his official Telegram channel that he was ceasing his activity there, many saw it as a definitive sign that Telegram would soon become inaccessible in Iran:

⛔️The end to the activity of the Telegram of KHAMENEI.IR

?In order to protect national interests and to remove the monopoly that Telegram messenger maintains, the office of information for Ayatollah Khamenei will from this moment on stop disseminating his words and publications on this messenger.

?We started this KHAMENEI.IR initiative before the country's institutions launched an official program to support internal messengers and eliminate the monopoly of cyberspace from non-Iranian messengers.

? From now on, information about the news and articles related to the leader of the Islamic Revolution will be made on the following messengers:

Elsewhere, the supreme leader has offered only vague statements on whether he supports the decision to censor Telegram completely by the end of April.

For his part, President Hassan Rouhani expressed opposition to the move to block Telegram in an Instagram post dated April 23. But he also voiced his support for ending Telegram's “monopoly” over Iranian communications:

Instagram caption (and image translation): Removing a monopoly and helping to strengthen local messengers does not mean we have to limit other social networks. People have #the_right_to_choose and can work together to be active on various social networking platforms.

The 12th government will protect cyberspace and people's ability to access and communicate with the public.

In a similar vein, the head of the presidential Strategic Management Center issued a directive to all government institutions to stop using Telegram for official communications.

If Telegram is banned and the move becomes permanent in the same way that Twitter and Facebook were blocked in 2009, it will indeed be a blow to Rouhani's rhetoric about providing a free and open internet for Iranians. In fact, a week before censorship was implemented during the 2017-2018 protests, Rouhani promised that “my minister is here and he promises not to place his finger on the filtering button…the ability for people to communicate with the world will be preserved. We're not looking to filter social networks.”

In many ways, Rouhani's ability to keep foreign social media platforms such as Telegram and Instagram unfiltered has been seen as one of the most significant progressive victories of his administration.

However, the president and the Supreme Leader are aligned in their desire to encourage Iranians to use local platforms, and to thus dismantle the so-called Telegram “monopoly” on mobile messaging in Iran. This follows the logic of the National Information Network (NIN), which the Rouhani administration has been working to establish. NIN is an effort to centralize all data and systems into technical infrastructures that are based inside the country–and therefore controlled by Iranian authorities. Naturally, it means moving away from foreign communications applications hosted outside of the country, like Telegram.

Although the technical censorship has yet to be implemented, these discussions warning of Telegram's imminent blocking have resulted in actual dips in Telegram usage amongst Iranians. Data across more than 700,000 Persian-language Telegram channels collected by the Social Networks Lab at the University of Tehran shows that since the announcement of Telegram's fate, usage has dropped to levels only previously seen when the platform was temporarily censored during the protests.

While only time will tell if authorities follow through on blocking Telegram at the end of this month, what is clear is that the uncertainty surrounding the situation has produced a chilling effect on the app with similar, if not the same, results as outright censorship.