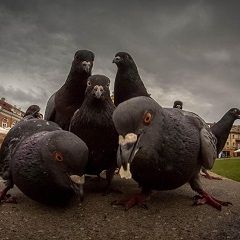 A collage of the most tweeted photos from the hashtag #ЈавенПростор on Twitter.

With lack of parking space a big issue in Skopje, the capital of Macedonia, drivers are frequently encroaching on public space meant for pedestrians, forcing those on foot to take a more dangerous path on the road.

The issue isn't new and seems to have only been getting worse. Drivers have been treating crosswalks, parks, sidewalks, private garage entrances, and playgrounds — anywhere a person can walk — as their own parking lots. Bars and restaurants have also taken over part or all of the sidewalk to create terraces and increase profits.

Their choice can block the way and force people, including more vulnerable populations like mothers with baby carriages or those with disabilities, to walk in the street alongside traffic.

City authorities have largely turned a blind eye to the problem or, on several occasions, reacted only after an accident in which pedestrians were killed by vehicles caused public outcry.

A Twitter user under the name @baljumbaljum created the hashtag #ЈавенПростор (#PublicSpace) to raise awareness around the issue plaguaging citizens of the capital.

I'm opening #PublicSpace hashtag and I'm letting the photos speak for themselves.

Twitter users were quick to contribute to the hashtag, and online media have begun to pay attention too.

NGOs such as Skopje Smog alarm also joined in. When asked why they are participating if their core work relates to air pollution, they responded that cars contribute about 20% of air pollution.

#PublicSpace [next to the] #RailwayStation

The reaction has also lead to an online petition titled “Stop parking on the sidewalk” which to date has collected 7,188 signatures. The goal is to force city authorities to stop the practice of parking on walkways.

Some of the examples of tweets using the hashtag include a monument that isn't paid any respect:

#PublicSpace [in the municipality of] Kisela Voda.

A senior citizen struggling to use the walkway taken up by parked vehicles:

#PublicSpace Nikola Parapunov Street, Karpoš 4 [a district of a municipality in Skopje]

A restaurant that has staked claim on part of the street:

And police who are part of the problem:

There are not enough police officers to write tickets for parking on the sidewalk. They are all busy [at a local cafe].

If there's room in front of a building, a car will park:

A small contribution for #PublicSpace

This restaurant has completely occupied the walkway:

Questions for Centar Municipality and the Ministry of Interior:
1. What would happen if instead of 100% of the width of the sidewalk, the restaurant occupies 100% of the width of the street?
2. How much time would you have needed to remove it from the street? And why don't you use the same amount of time to remove it from the sidewalk?
#PublicSpace

The more expensive the car, the worse the offence:

#PublicSpace in Debar Maalo, a district in Centar Municipality.

Even hospitals are no exception:

No problem, pal, the patients will find a way. #PublicSpace

Pictured here is a mother walking her baby on the street due to occupied public space:

And in this photo a person using a wheelchair travels in the road as the walkway is occupied by parked vehicles:

How do you sleep at night, [Centar Municiplaity Mayor Saša Bogdanović]?

#ЈавенПростор (#PublicSpace) regularly features as one of the most popular hashtags on Macedonian Twitter, according to the Macedonian Trending (@trendingmk) service. Some Twitter users have suggested that its popularity would be better harnessed if more people tag the responsible institutions and officials directly in their tweets, instead of just using the hashtag

Whether it is as effective as it could be or not, #ЈавенПростор is nevertheless an important reminder of civic values in a society where abuse of the commons has become so widespread over the years that it's considered “normal” by many.