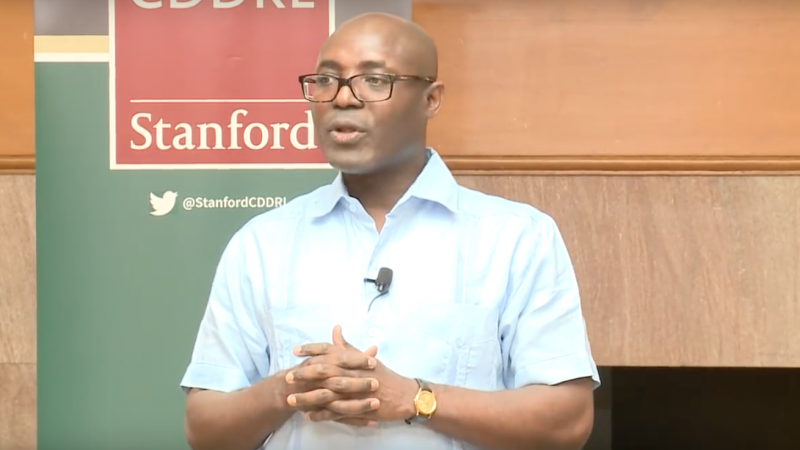 The journalist Rafael Marques in a seminar in Stanford in September 2016. Photo: Youtube screenshot/Stanford CDDRL

Angolan journalist Rafael Marques is once again being brought to court for his investigative work.

This time, Marques is facing charges of “insulting public authorities” after having published an article in October 2016 on the independent news website Maka Angola (of which he is the founder and editor) that raised questions over possible corruption against now-former Attorney General João Maria de Souza.

Mariano Lourenço, chief editor of the newspaper O Crime, which published the article in print, is facing the same charges. Marques is also being accused of “offending an organ of sovereignty” for allegedly having offended the ex-president José Eduardo dos Santos in the same piece.

The article reveals the ex-Attorney General’s acquisition of three hectares of land (around four football fields) in 2011, for 600,000 kwanzas (2,500 USD), to construct a residential compound. It is a beach front property in the city of Porto Amboim, around 220 km south of the capital Luanda, according to documents obtained by Maka Angola.

Since gaining independence from Portugal in 1975, Angola has been under the leadership of the Movimento Popular de Libertação de Angola (MPLA), the party of the current president João Lourenço, who was elected in August 2017. Lourenço replaced José Eduardo dos Santos, who was in power for over 35 years and headed a government accused of human rights abuses and restrictions on freedom of expression, with journalists and critics frequently harassed.

Souza's attorneys say that the Angolan journalists published the article a year after he lost the land's concession for failing to pay its fees. Rafael Marques’ defense contends that there nevertheless have been irregularities in the land's acquisition.

Charges were first brought against Marques in December 2017. The trial finally began on 19 March. The last hearing, scheduled for 16 April, was canceled due to the absence of João Maria de Souza, who argued that, as a retired judge, he could claim immunity from the proceedings and thus decline to be brought before the Provincial Court of Angola.

The judge presiding over the case determined that João Maria de Souza will be compelled to appear on 24 April in one of the rooms of the Public Prosecutor's Office, behind closed doors.

A longstanding target of the authorities

This is not the first time that Marques has faced prosecution for his journalistic work in Angola. In 1999, he spent 42 days in prison, without any formal charge against him, after having published a piece in which he described then-president José Eduardo dos Santos as a “corrupt dictator”.

In 2016, he was sentenced to six months in prison and a fine for publishing the book Blood Diamonds: Torture and Corruption in Angola (Diamantes de Sangue: Tortura e Corrupção em Angola), edited in Portugal in 2011, which denounces human rights abuses in the country’s diamond mines. Marques was accused of libel against mining companies and Angolan army generals involved in the diamond trade.

In May 2016, following pressure by international and civil society organizations, all the accusations against Marques relating to the book were withdrawn by Angola’s authorities.

According to Marques’ then defense lawyer, David Mendes, this trial has seen a series of irregularities, among them the fact that the court declined to hear testimony from experts and witnesses, apart from Marques himself. He told DW at the time:

For those who followed the trial, they saw that there was no discussion of the case. The defendant was heard but the factual matter was not discussed, that is, the facts were not discussed. The defendant was heard, but witnesses and speakers were dismissed. The judge cannot decide with that what comes from the hearing. Then there was no reason to have a trial […] A trial only serves to verify the factual reasons for the justification or not of the constituent elements of the crime. The crime was not discussed, the issues which would have persuaded the court were not discussed. Where did the court’s certainty come from to pass sentence?

The Portuguese editor of Tinta da China made available a free PDF download of the book Blood Diamonds.

When it comes to people working to uncover human rights violations, Rafael Marques is not the only one to face pressure from the Angolan government.

In one case, known as 15+2, a group of activists was arrested in June 2015 during a group study session on Angolan politics, focusing on the book From Dictatorship to Democracy by the American writer Gene Sharp, which proposes peaceful forms of protest.

In March 2016, the courts gave them prison sentences varying from six months to two years and three months, accused of preparing rebellion and conspiracy. In May 2016, the sentences were reduced to house arrest.

Another activist targeted by authorities is José Marcos Mavungo, founder of the human rights organization, the Mpalabanda Civic Association of Cabinda (Mpalabanda Associação Civica de Cabinda). Mavungo was detained in March 2015, accused of rebellion, and later sentenced to six years in prison. In May 2016 he was freed due to “lack of evidence”.

Cabinda, currently an enclave of Angola north of the River Congo, was a Portuguese protectorate from 1885 to 1956, when the colonial administration decided to govern the region from Angola, but without the agreement of local leaders. Since the 1960s, the region has faced an armed separatist insurgency that intensified after the independence of Angola, which inherited sovereignty over the area from the Portuguese.

The conflict has caused a lot of suffering to Cabinda’s people. Over the years, various international organizations have criticized Angola’s military operations in Cabinda for human rights violations and restrictions on freedom of expression.

In December 2017, 28 activists belonging to the organization Association for the Development of Human Rights Culture (ADCDH) in Cabinda were detained when they were preparing to participate in a peaceful demonstration. They were freed the same day.