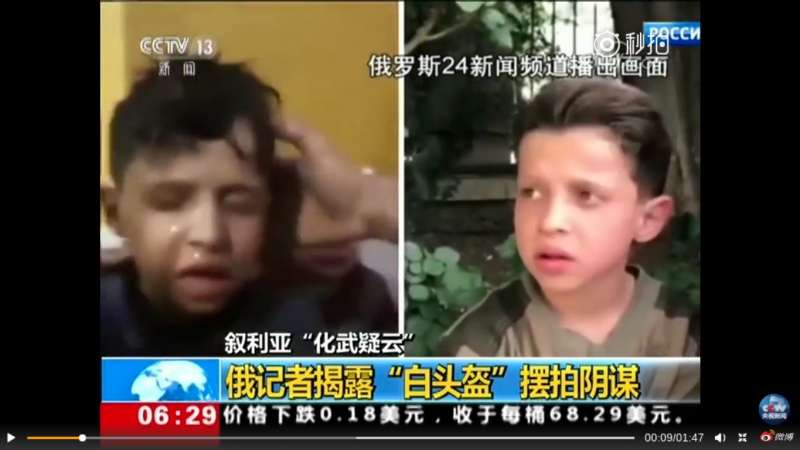 Screenshot from the CCTV news report citing Russian media, which claimed that the chemical attacks in Douma were staged.

Days after the United States, the United Kingdom and France launched airstirkes in Syria in response to the suspected use of chemical weapons near Damascus by the Syrian government, Chinese President Xi Jinping called British Prime Minister Theresa May and Turkish President Recep Tayyip Erdogan, stressing the need to cool down the conflict and investigate the chemical attacks.

But China's state-owned media outlets echoed Russia's allegation that the chemical attacks in Douma were staged. Microblogging website Weibo's top search result showed a China Central Television report about a Russian journalist’s interview with a Syrian child who was featured in a video distributed by various Western media outlets:

Russian reporter revealed the ‘chemical attack’ video was fake: the Syrian boy explained how the video was staged] According to Russian report, the ‘white helmet’ organization workers, supported by Britain and other Western countries, used food to lure Syrian kids into making the fake video that showed the so-called catastrophe of a chemical attack. The 11-year-old boy, Hassan, who received first aid after the purported chemical attacks, said, ‘People grabbed me and poured water all over me when I entered [the first aid station].’

As anticipated, the CCTV news features attracted a number of nationalistic and anti-imperialist comments, like this one:

More than one hundred years ago, the U.S., Britain and France invaded China and burned the Old Summer Palace; today they invaded Syria. The nature of imperialists has never changed.

The Syrian civil war broke out after several months of a violent government crackdown against unarmed protesters in 2011; the armed conflict has led to the death of more than half a million people in the country. Despite the subsequent humanitarian crisis, China has often sided with Russia in vetoing United Nations Security Council resolutions on the crisis, claiming that military invention and economic sanctions would derail the issue of political settlement and undermine regional peace and stability. China has supported five of the seven Russian-led vetoes.

At the same time, viral commentary circulated on various social media platforms comparing the current Syrian crisis to China's situation during the First and Second World Wars, and arguing that weak countries will always be bullied by strong ones — hence, it is essential for China to become strong.

However, many netizens did not buy the Russian version of the story — although, to be accurate, Russia put forward several accounts of the events, first claiming that the chemical attacks were staged, then that they were real but Assad wasn’t responsible, then that they were indeed staged, but by the UK. Russian state TV even used a set from a movie to emphasize that the attacks were fake.

Judging from the CCTV discussion thread on Weibo, though, it was the “fake news” narrative that stuck, many netizens found it implausible:

Do not believe Russia.

In contemporary world history, Russia has a role in all evil deeds.

[Short commentary] Mainland Chinese media outlets spent great effort in spreading rumors concerning the U.S. airstrikes in Syria. This, in a way, reflected that airstrikes had hurt the Chinese government. The Russian daddy once promised that he would protect Assad. Yet, the US launched airstrikes and Russia could not do anything, let alone block the missiles. How would Xi feel about that? Has the Russian daddy given up on his kids? What has happened to the promise of love?

One key component that is missing from the Chinese social media discussion is the misery of the Syrian people — and it begs the ethical question of why China, if it really is a strong country, keeps voting at the UN against international intervention, under the pretext of state sovereignty. If Western countries are the imperialists as Chinese propaganda authorities and nationalists have suggested, what is China in the arena of international politics?