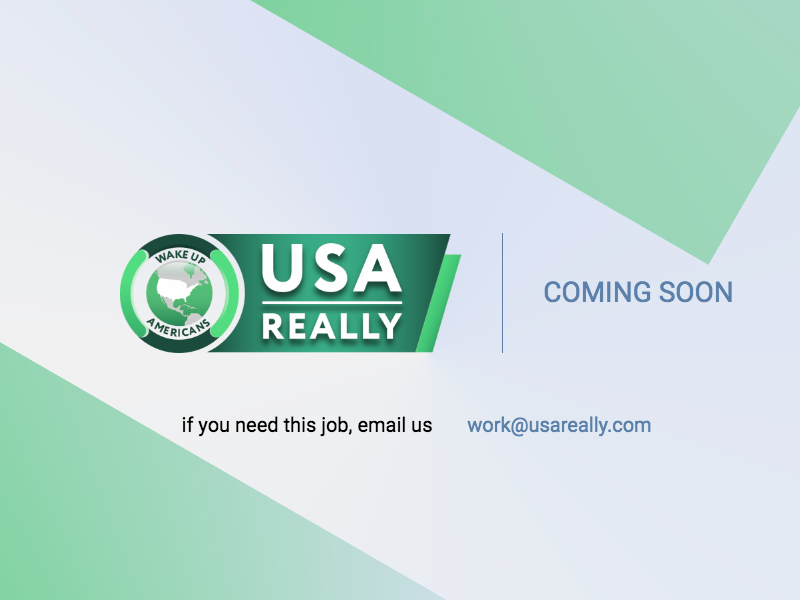 The project, initially reported by EU vs Disinfo, takes a stance consistent with the anti-Western, anti-liberal narrative of previous Internet Research Agency efforts. Examples include the now defunct Russian language sites usaend.net, goodbyeusa.com, and antiliberalism.com, all registered in 2014.

The agency, also the subject of the 2015 eponymous exposé in the New York Times Magazine, grabbed international headlines again in 2016, before and after the presidential elections in the United States.

The IRA's previous attempt in 2014 to influence American audiences via a traveling photographic exhibition titled “Material Evidence”, has already been documented by RuNet Echo and others. The troll farm also produced a bizarre, scatological attempt at humor, “I am Ass”, aimed at US readers: (“There’s shit in Obamacare.” “Shit is in Health Care, in spy scandals.” “US National Debt is the biggest piece of shit.”)

The information flow coming from the US and its allies, which is aimed at discrediting the Russian Federation, should not remain unanswered by the Russian media…The Federal News Agency (FAN) is not going to put up with the hegemony of the US authorities in the information field.

On April 4, 2018, at least nine different domains — usareally.com, usareally.net, usareally.org, usareally.biz, usareally.us, usareally.space, americareally.info, usareally.info and usareally.ru — were registered using the moniker “usareally”. They all had different top-level domain extensions, perhaps chosen to provide superficial credibility for American audiences. The last domain is the only one with a Russian extension, and as yet, there is no site attached to it.

On closer examination, the project bears further hallmarks of Russian origins. For example, the designated mail server for usareally.com (mx.yandex.net) belongs to the Russian Yandex service, even though the site's main contact e-mail (work@usareally.com) gives no such indication.

In addition, viewing the site's source code reveals that its Google Fonts API address is set to support Cyrillic and Extended Cyrillic typefaces as a subset to the standard Western character set, though no Russian text is displayed to the reader. This may be a default setting left over from RIA FAN's many Russian-language sites:

But there are also more direct clues pointing specifically to the infamous troll farm. All but one of the domains was registered anonymously on April 4, 2018, through regprivate.ru, part of reg.ru — a Russian domain registrar that the Internet Research Agency has previously employed: 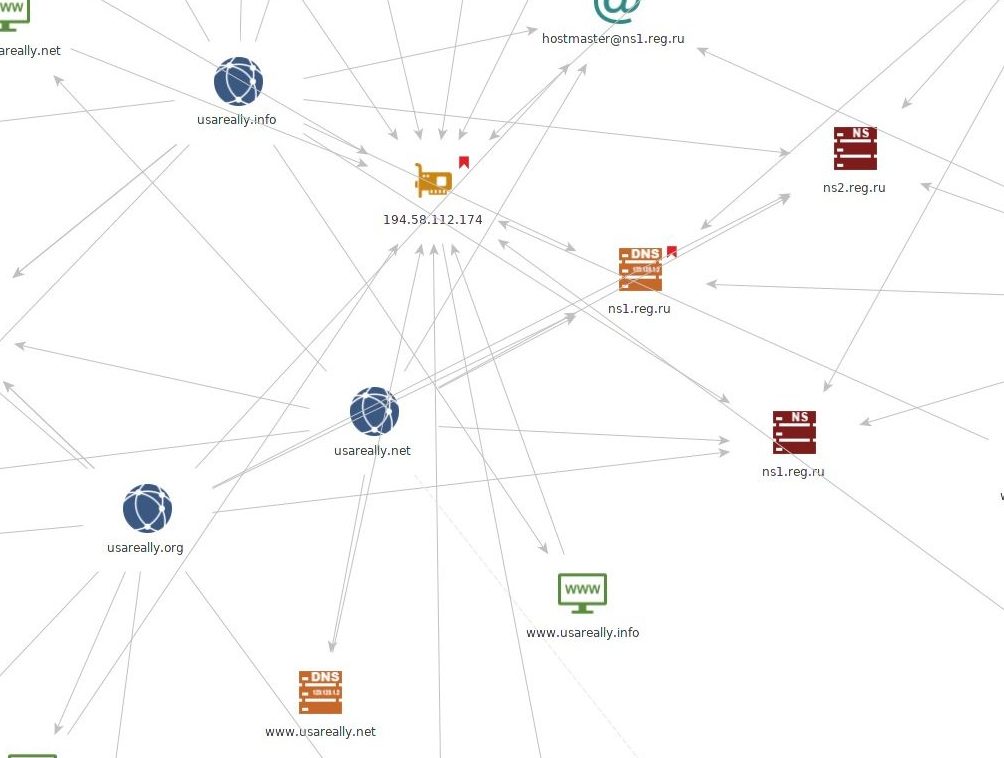 Most of the USAReally domains were registered using a Russian service, Reg.RU, centered on IP address 194.58.112.174. Image by Lawrence Alexander.

Furthermore, overall domain anonymization was poorly realized, with usareally.us including unredacted contact information under the name of Evgenii Zubarev, the CEO of RIA FAN, and similar “news agencies” sharing the same physical building and web infrastructure as the IRA. This includes a Russian Yandex e-mail address, riafan@yandex.ru, and a Saint Petersburg telephone number: 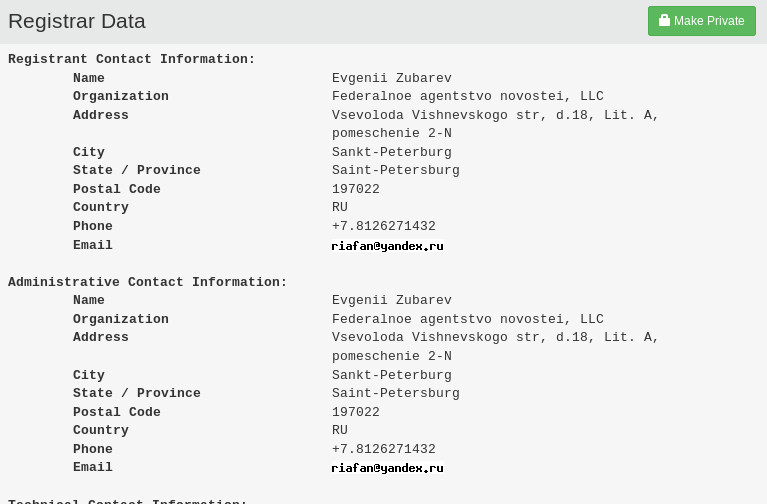 The Internet Research Agency's network of anti-US and pro-Kremlin social media pages and sites, along with their allies and amplifiers, wasted no time in heralding the arrival of the project. On April 4, no more than a few hours after the USAReally domains had been registered, at least 20 such VK pages (including PolitDigest, Politstar and Putin Speaks) published links to the RIA FAN press release: 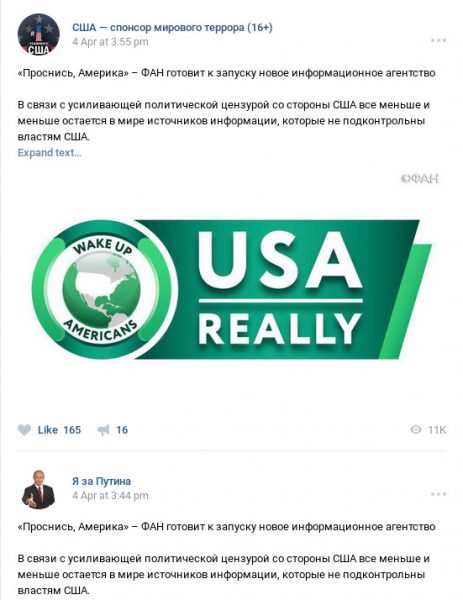 In the press release, the “news agency” says it intends to recruit English-speaking contributors to assist with the project. To this end, usareally.com offers readers a humble invitation: “if you need this job, e-mail us”:

It is clear that attempts to disguise the Russian and pro-Kremlin origins of the US-centred project have been both ill-conceived and quite limited. Links between the “Federal News Agency” and the Internet Research Agency have already been widely reported, and although six different domains have been registered, only one currently resolves to an active website.

At present, USAReally has probably received more attention from observers of pro-Kremlin propaganda on Twitter than from the uninformed readers for which it is intended:

Great work out there by @LawrenceA_UK and others who also track #Russian #disinformation and #troll activity. Piggy backing on this article, I ran a reverse image search for this new logo and voila. They're all over these RU sites.https://t.co/3rqMHPW7af pic.twitter.com/jc64rAeqxy

Thread: Catching up on a great spot by @EUvsDisinfo: this advert for American journalists for a "Wake up America" programme from https://t.co/8PrHpKLXuQ.

It's the troll factory. pic.twitter.com/QXSXgIRCUu

If the project was indeed conceived by the Internet Research Agency as an exercise in covert disinformation against the United States, it seems unlikely that it will now fulfill this purpose.