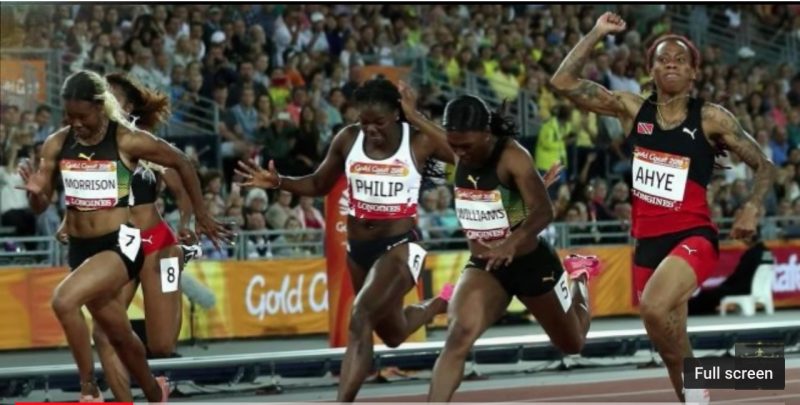 A screengrab from a YouTube video by CelebNews&Style, celebrating Trinidad and Tobago sprinter Michelle Lee Ahye's win in the 100m event at the 2018 Commonwealth Games.

Sprinter Michelle Lee Ahye became the first woman to bring home a gold medal for Trinidad and Tobago when she won the 100m Commonwealth Games title on April 9, 2018. The country was overjoyed, with huge coverage in mainstream media and messages of appreciation and congratulations flooding social media.

These would have been two completely unrelated events had it not been for a front-page story in the Trinidad & Tobago Guardian on April 17, titled “Smear Factor”. The distasteful headline was accompanied by photos of Ahye and her partner, who happens to be a woman. The bullet points under the photographs claimed that they had been “leaked” online and “spark[ed] up homophobic debate”, the newspaper's supposed justification for publishing the story.

Although Ahye's manager told the newspaper that Ahye has “never kept anything from the public”, she had also never discussed her sexual orientation in the public arena before, so The Guardian's coverage effectively outed her in front of a national audience.

Most social media users, fed up of the holier-than-thou rhetoric that surrounded the Jason Jones court case, lashed out hard.

What a sorry nation we have become!

We don’t even remember how to celebrate anymore! We don’t recognize joy when it is right in front of us! We don’t even understand what the word pride means anymore!

Imagine this athlete brought home gold for all of us to celebrate, enjoy and take pride in, yet the focus of this front page story in today’s #GuardianNewspaper is on her sexual orientation.

Michelle, I would like to publicly apologise to you on behalf of the many hundreds of thousands of #TrinidadandTobago nationals that see this as nothing short of desperation to sell more newspapers and at the same time wish to thank you for representing the #RedWhiteAndBlack so well on the world stage last week. We also wish you all the best in your professional and personal life… 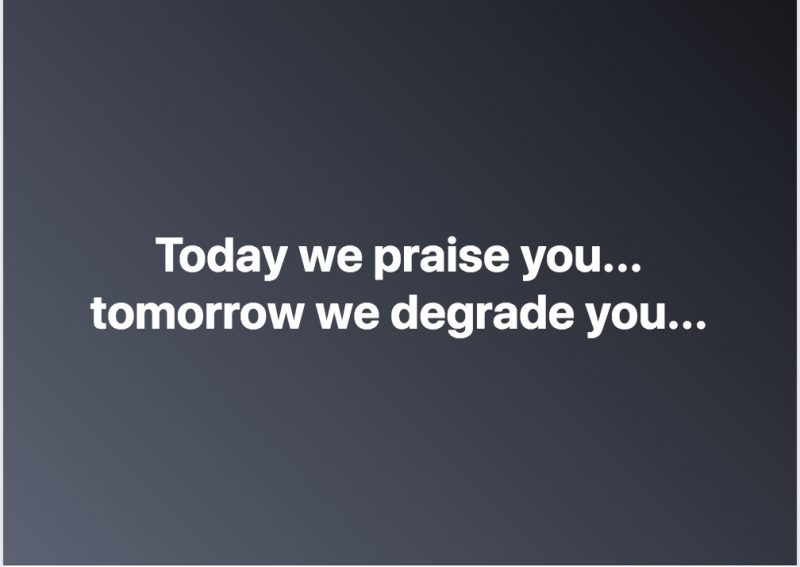 A private Facebook status update which reads: “Today we praise you…tomorrow we degrade you…” Used with permission.

“Do something good for the country.. and they still find a way to be negative”

While many netizens wondered why Ahye even bothered to represent Trinidad and Tobago, where both the public and private sectors have a reputation of not supporting athletes and then jumping on the bandwagon after they succeed, others were squarely facing down the issue of journalistic integrity (or lack thereof).

Caroline Taylor referred to the paper as “a conglomeration of desperation without conscience”, while activist Tillah Willah, who used to have a column in the Guardian, commented:

[…] the Jammette of St. Vincent Street aka the mouthpiece of the terrified has again been found in a compromising position. Compromising journalism. Compromising a young woman's right to be herself. Compromising the nation.
T&T Guardian of nothing. 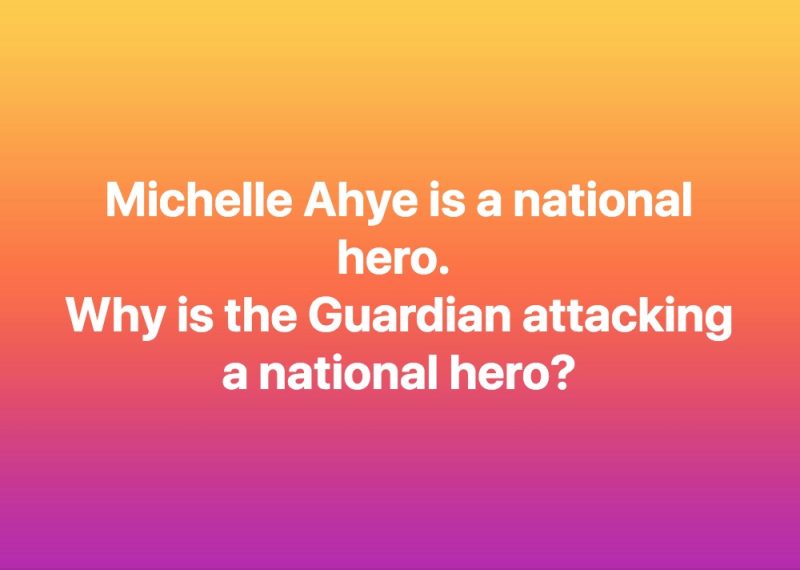 we really don't deserve michelle lee ahye. she made history, and won gold for our country, and y'all choose to expose HER PRIVATE LIFE. Trinis, more so the guardian papers, are disgusting.

Ahye herself, according to one radio station's Facebook page, deleted her social media accounts, but not before sending one last tweet, which read, “Do something good for the country.. and they still find a way to be negative smh Trinidadians.”

Many social media users were calling for a boycott of the newspaper, though some netizens were not convinced that action would have much staying power. Others were asking for the resignation of the newspaper's editor.

In a guest post at Wired868, Sr. Sheila Rampersad attempted to dissect the editorial decision:

Fleeing from journalistic intelligence, skill and artfulness, they saw the kernel of a legitimate news story, wrapped it in cultural conformity and late afternoon testosterone, then dropped that obzocky boulder into dirty water. […]

At the core of the Guardian fail was a valid news story: Michelle-Lee Ahye not only won us gold on the Gold Coast but did so with near-perfect execution. She ran the race of her career on the same day Justice Devindra Rampersad upended the golden-apple cart. [Editor's note: It was actually three days after Ahye's race that the judicial decision was announced.]

In the thick, hateful backlash, people were evicted, spat upon, verbally and physically abused, threatened with violence. With Ahye fresh on the mind, someone outed her by circulating a photo of her with her significant other. Another aspect of ugly attacks on LGBT people; now they outing them with the intention to shame, diminish their selfhood and national contribution, and draw a bullseye on their backs.

Any editor reading that story should have known to casually guide the reporter to fill out the parts, link the items, remove the story’s self-doubt and its irrelevant facts. Easy call: suppress her gf, push harder at the reprisal angle. […]

Instead, instincts clashed. The story wanting to go one way, the presentation of the story decidedly heading in another: we have photos, man; use them! Crop the gf? Nah, man. She smoking!

The country loses. This time.

Dr. Emir Crowne called the story “a thinly veiled attempt by the Guardian to trade off the recent, and intense, interest in LGBTQ issues and rights”:

Irrespective of where one stands on LGBTQ rights, the story was shameful. It demeaned one of our island’s greatest athletes for no countervailing journalistic purpose. […]

Perhaps the silver lining in all of this is tomorrow’s unqualified apology that the Guardian should issue, given that their editorial policy appears to be based largely around social media outrage.

The newspaper did issue an apology, which some netizens thought was too little, too late.

With the country's president urging both mainstream and social media to “be careful not to damage the national psyche by inadvertently inciting victimisation, bigotry and violence”, the discussion has now turned to the pressing concern of training journalists how to responsibly cover lesbian, gay, bisexual and transgender (LGBT) issues.

Tillah Willah, who, along with a few activist colleagues, created workshops to equip people with the tools to deal more effectively with gender-based violence, LGBT and other human rights issues, prefaced her offer to conduct sessions with the press by explaining:

Having worked for most of my life in media of some sort, I'm careful about being critical. Having spent most of my life in activism of some sort I know what it's like when journalists don't do their homework, rush down a story and/or are more concerned with protecting the agendas of their media house rather than getting a story that gives context, history or sensitivity to an issue. Chasing deadlines doesn't always give us the space to do that kind of work but a greater sense of awareness then informs the way that you respond in the field.

She added that the Media Association of Trinidad and Tobago (MATT) had yet to take her up on her months-long offer for sensitivity training sessions.

After blogger Rhoda Bharath followed up with MATT, the organisation replied that it is in the process of finalising a venue for a workshop it has arranged, and said that it would issue an announcement once the location was confirmed.