Pakistan's under-threat minorities have found their voice. But will the state listen? 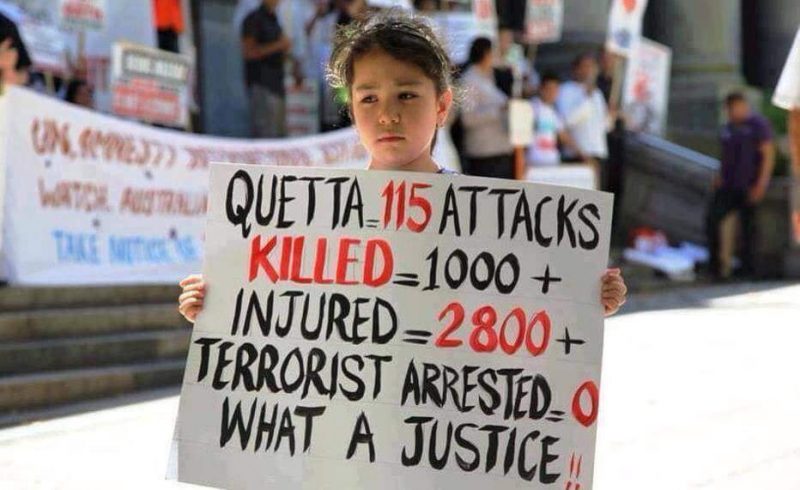 It is just another spring Sunday in Quetta, Pakistan. In the Hazara section of the district of Mehrabad, Nazar Hussain is about to start his work day. He grabs the keys of his yellow cab and leaves his home for what would be the last time. He knows that his almond eyes are like a target on his back, his faith a slogan for people that want him dead.

Members of militant organizations including Lashkar-e-Jhangvi (LeJ), Tehreek-e-Taliban Pakistan (TTP) are active in Quetta, searching for Hazaras to kill. For Hazaras in Quetta, therefore, working is not an ordinary activity: it is an act of courage. At any rate, Nazar Hussain doesn’t have a choice—he needs to make a living.

He starts to drive through familiar streets with a customer in the passenger seat. Soon, a terrible crescendo of explosions streaks through the air. Armed men are opening fire on Nazar's cab. Seconds later, Nazar Hussain is dead. His passenger recovers in hospital. No group has claimed responsibility for the attack.

Threatened both here and there

According to a report by the National Commission for Human Rights (NCHR) titled ‘Understanding the Agonies of Ethnic Hazaras’, 509 members of Quetta's Hazara community were killed and 627 injured in extremist violence in the last five years alone. According to Bostan Ali Kishmand, regional head of the Hazara Democratic Party (the political party of the Hazara people in Pakistan) the real number is much higher.

Terrorists justify their attacks according to sectarian logic. The Hazaras are mainly Shia Muslims, a minority in Sunni-dominated Pakistan. In 2012, threatening letters started to circulate in the Hazara areas of Quetta. In these letters Lashkar-e-Jhangvi warned the residents “either to leave Balochistan or to get prepared for more violence as the LeJ will be intensifying the ‘holy war’ against the Shia Hazaras, similar to the one waged by the Afghan Taliban led by Mullah Mohammad Omar against the Shia Hazaras in Bamiyan and Ghazni provinces of Afghanistan.”

Yet not all Hazara belong to the Shia sect, and that's why some experts believe that there are other reasons behind the targeted killings.

The Hazara community has been living in Pakistan since the 1880s. Most of them migrated from Afghanistan due to persecution by the Emir Abdul Rahman Khan, under whose reign Hazara were branded “infidels” and killed in large numbers after they rebelled against the ruler.

Another influx took place in the 1990s due to an ethnic cleansing attempt launched by the Taliban.

After Nazar Hussain’s murder on April 1, other Hazara taxi drivers launched a protest in Quetta against what, for them, was just the latest in a long series of last of targeted killings in the city.

Just in case you didn’t know; there is a protest sit-in going on in #Quetta’s Alamdar Rd against #HazaraGenocide. So far no media outlet, except @BBCUrdu, has reported. Media blackout is criminal. #Pakistan https://t.co/r1NAEgNS5R

Hundreds of people joined the demonstration, which soon spread to other cities of Pakistan, such as Islamabad and Lahore.

The protests have involved many female activists, despite the fact this demographic is most often the target of online abuses and threats. The protests lasted eight days.

‘You cannot scare a Pashtun with death threats anymore’

Today, Nazar Hussain rests in a cemetery where thousands of Hazara lie buried side by side, all victims of extremist attacks and targeted killings, all bearing testimony to a state that is either indifferent to or complicit in their deaths.

Day 6: Sit in by Hazaras continues in Quetta against their targeted sectarian killing forcing them to stay behind barriers and inside their homes. They don't effectively enjoy right to life, freedom of movement, freedom to trade despite all the security checkposts in Quetta pic.twitter.com/KMl3ZGXiQk

But Hazara are not alone in suffering at the sharp end of militant violence and injustice. Another oppressed minority, the Pashtun, has been protesting since January, when the killing of a young aspiring model sparked outrage in their community.

Pashtuns from the tribal areas in Pakistan's northwest have suffered militant attacks, internal displacement, ethnic stereotyping and crackdowns by the army.

Manzoor Pashteen is the leader of the Pashtun Tahafuz Movement (Pashtun Protection Movement), which started in 2014 as an initiative for clearing landmines in Waziristan and evolved into a movement demanding rights and security for Pashtuns.

On April 8, tens of thousands of ethnic Pashtuns gathered in Peshawar for a mass demonstration to demand the protection of their rights.

“Naming or blaming the ISI or MI was equal to death. But not anymore. I will call out any tyrant, and I am proud of it. You cannot scare a Pashtun with death threats anymore”.#PashtunLongMarch2Peshawar @a_siab @sid_abu pic.twitter.com/DVcxsBcZ3c

Pakistan's Christian community have been victims of targeted killings as well. On April 15, unidentified gunmen opened fire on a group of Christians outside a church in Quetta. Just a few weeks before, four other Christians were shot dead in the city. Credit for the attack was claimed by the Islamic State group, but security forces have denied the organized presence of ISIS in Baluchistan, indicating LeJ as the probable suspect.

As of today, the plight of these communities is being ignored by the Pakistani establishment. Perpetrators are never arrested and Pakistan authorities recently exhorted Christians to stay at home as the only way to ensure their security.

The international community should pay attention to what is happening in Pakistan and show support for movements of people defending the simple right to leave home without the fear of being kidnapped, injured or killed.