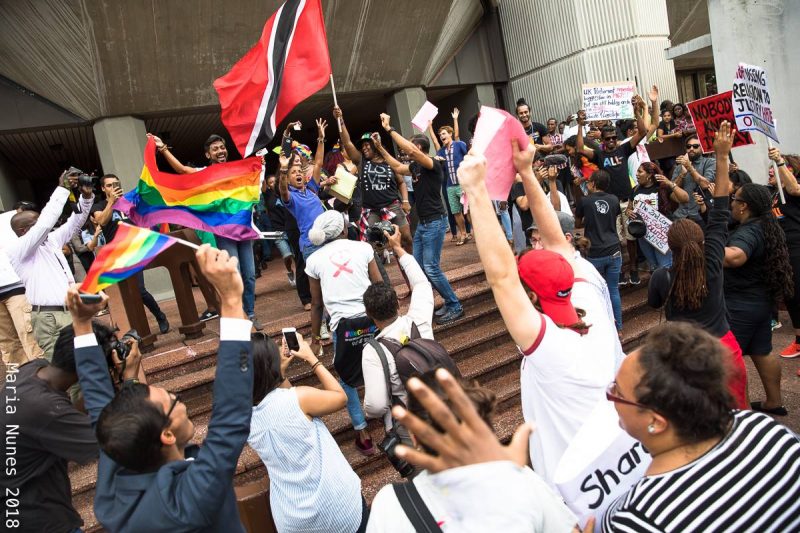 An elated crowd on the steps of Trinidad and Tobago's Hall of Justice as they received news of the decision on April 12, 2018. Photo by Maria Nunes, used with permission.

Jamaicans reacted in fairly predictable fashion to the news of the April 12 court ruling in Trinidad that found the “buggery law” unconstitutional and illegal.

Local LGBT lobby groups and individual campaigners expressed their delight, while those representing fundamentalist Christian groups voiced disapproval. The matter has been relatively low-key in traditional and social media in the past year, as views on the issue of the country's own buggery law remain entrenched, and there have been no major developments either socially or politically.

After the Trinidad and Tobago ruling, the question of whether Jamaica's antiquated law should be retained is at least back on the island's radar, for the time being.

The Jamaican law against anal sex (“buggery”) is over 150 years old (Section 61 of the Offences Against the Person Act 1864 under the heading “Unnatural Crime”) and has been hotly debated for many years. There has been little change in the stance of those engaged in the debate. Some high profile church leaders have spoken out against its repeal, although religious leaders are not unanimous in their condemnation. Christian fundamentalist groups such as the Jamaica Coalition for a Healthy Society and the Love March Movement (the latter's mission: “To see a Jamaica that is educated, challenged, prayed and loved to sexual purity and the protection of the family”) strongly support the retention of the law and are strident in doing so.

However, a study published in 2017 and commissioned by LGBT rights group J-FLAG found that only 7.62 per cent of cases reported to the police between 2011-2015 related to incidents between men, pointing out that the current law is more detrimental to women and children.

The LGBT community in Jamaica celebrated the ruling and expressed hope that it might spark change in Jamaica. The Executive Director of J-FLAG tweeted:

Great news coming out of Trinidad & Tobago where the buggery law has been struck down. Lovely to see evidence of progress across the region. Commendations to Jason Jones and colleagues from organisations there on their success.

J-FLAG shared a video of celebrations outside the Trinidad court on Facebook and declared:

We are celebrating with our family as LOVE wins In Trinidad! ?
Judge finds the buggery law and serious indecencies unconstitutional as applied to adult consensual acts.
?: CCN TV 6 #LoveWins #Trinidad #ShareTheNation #WeStandWithYou

CVC stands in solidarity with the LGBTI community in Trinidad and Tobago as they push ahead for their rights to be recognized. pic.twitter.com/uQTL059JVk

FROM AN EX-STUDENT IN CANADA! ?️‍????? ?
“I know I've said it before… But thank you Maurice. Thank you for everything that you do in fighting for the rights of LGBTQ people. Today's victory in T&T is close to home for me. Both of my parents are Trini… My entire family are Trini. My Dad often asks me to go with him to Trinidad. I always say no because I don't feel safe in a country that doesn't care about my rights. I have often been embarrassed to tell people that my background is Trini. I shed tears today when I saw the article regarding the courts striking down the anti-buggery law.
Thank you for fighting for us. As I've said before, you are my Harvey Milk. I thank God for giving the world activists like you.”

Tomlinson, who has challenged many laws in courts across the Caribbean, added:

It's heartwarming that a Caribbean court has again offered such a favourable ruling regarding the respect of the rights of LGBT, with Belize being the first. It clearly demonstrates that our courts can uphold justice by recognising and respecting the inherent rights that should be afforded all human beings.

Over in Belize, where the Chief Justice ruled that the buggery law was unconstitutional in August 2016, prominent LGBT activist Caleb Orozco, who filed and won that case, shared on Facebook:

It was not PANCAP that helped in Trinidad and Tobago, it was Jason Jones who took a risk and led the way in a moment of Stubborness. In Belize, it was not PANCAP that helped, it was one person who took a risk and led the way while hundreds loan an invisible hand in the process. In Bahamas, it was not PANCAP, it was a local politician. What we see in the Caribbean is that decrim as a broader issue and that is to raise awareness that fundamental rights belong to all and that political leaders in this region can no longer continue the practice of legislative exclusion or language exclusion in UN outcome documents. LGBT Caribbean exists and that all laws, should follow the principle of inclusion and equal protection under the law. In simple terms countries are not government on the whims of individual morality, but a constitutional one. For Belize, we set the norm when we got independence and accepted our constitution. A lesson that rights exists in an advocacy framework. Now to be clear, decrim in not an end all solution, its just the begining of a reform process that will be years in the making. Bless Jason Jones on this day, your tenaciousness pushed the region along.

PANCAP, the Guyana-based Pan-Caribbean Partnership Against HIV and AIDS, shared their statement on Facebook, headlined “PANCAP Says Ruling Affirms the Right to Human Dignity By All.”

“This landmark case signifies a necessary step in the decolonization of our independent Caribbean territories,” B-GLAD Co-director Ro-Ann Mohammed said, while making reference to similar laws in Barbados.
“These laws criminalizing consenting acts of love between autonomous adults were left behind as a relic of colonialism,” Mohammed stressed, adding that Britain discarded similar legislation since 1967, and such laws had no place in the region.

Will this ruling have any impact on public discussion or political thinking in Jamaica? Will it revive the debate on the buggery law in Jamaica? And will it lead to legislative changes? One Jamaican wondered:

What sayeth the Jamaican courts now? Are we just gonna ignore this precedence setting case? Will the church cower the judiciary and the government again? Will emotions and privilege prevail? Or will cowardice give way to logic and sound legal standing? None free, till all free!

On Facebook, however, Jamaican human rights activist and Anglican priest Father Sean Major-Campbell expressed the belief that change in Jamaica would be slow in coming. “It is easier to break the chains of the law than those of the mind,” wrote Fr. Major-Campbell. “Bigotry is Herculean.”