Forced Onto Live TV With Her Employer, a Migrant Domestic Worker in Lebanon Recants Claims of Abuse 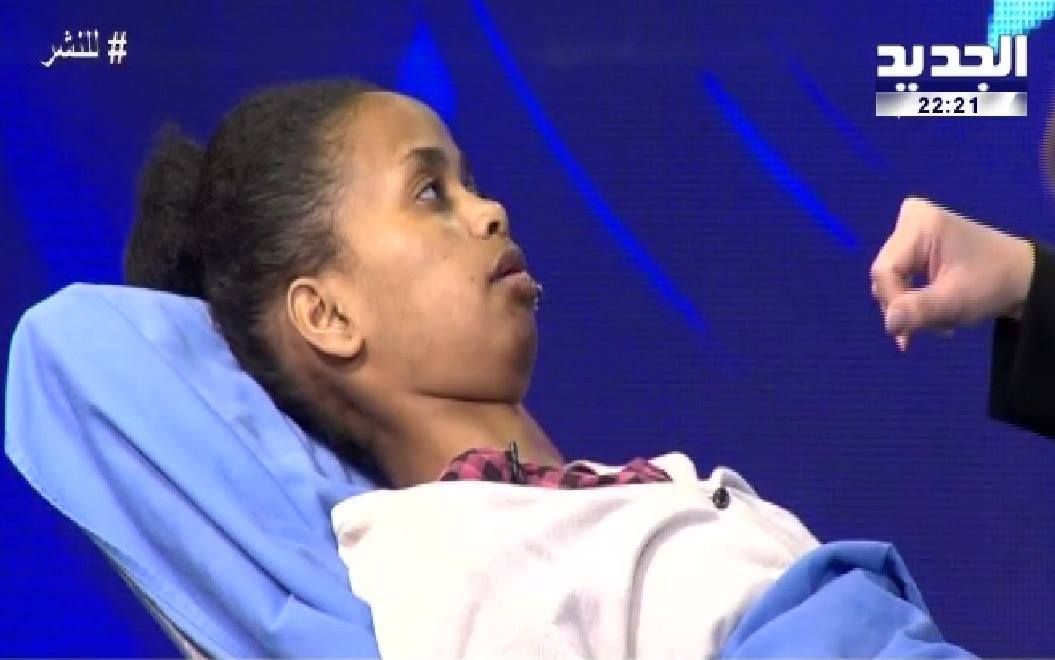 Lensa Lelisa appearing live on a Lebanese program while still in a hospital bed. Source: This is Lebanon Facebook page.

On 31 March, Global Voices published an account of the predicament of Lensa Lelisa, a 21-year-old Ethiopian migrant domestic worker who alleged that her Lebanese sponsors, the family she lives with and works for, had been abusing her. Desperate to escape, she said, she jumped from the balcony of the second floor, breaking her legs.

Her video testimony, in Amharic with English subtitles, was released on social media by the Facebook page “This is Lebanon“, which focuses on exposing abuses faced by migrant domestic workers in the country. It was filmed with the help of Lensa's aunt Ganesh, who visited her at the hospital.

It was then revealed that her employers run a haute couture fashion company called Eleanore Couture. Outraged, dozens of Lebanese and non-Lebanese protested in front of the company's offices in Jdeideh, north of Beirut, and many more took part in an online #IAmLensa campaign to raise awareness.

Read: “They Beat Me Everyday With An Electric Cable… They Smashed My Head Into The Walls.”

When Lensa was discharged, her employers took her back to their house, despite the allegations and the subsequent outcry by many Lebanese and non-Lebanese groups.

But the story took an even more troubling turn when on 2 April, the TV program “Al Nashra” on Lebanese channel Al Jadeed hosted one of Lensa’s employers (Crystel), her lawyer, and Lensa herself, “in an attempt to reveal the truth behind what happened to Lensa, within ten minutes”, to quote the video released by “This is Lebanon”.

The host spoke English with Lensa, and Arabic — a language that Lensa manifestly barely understands — with the other two women. With the help of volunteer translators, the 12-minute episode was released on “This is Lebanon” with English and Amharic subtitles.

‘Because I see myself broke, I don't want to work anymore here’

During the appearance, Lensa recanted her story and said that she had accidentally fallen down. The host then asked her, “You fell? When you were doing what?” to which she replied, “Putting my clothes out on balcony.”

At that point, Crystel intervened and said, “I insisted that Lensa appear on TV today” to which the host replied, “I didn't expect her situation to be so bad,” referring to the fact that Lensa was still in a hospital bed as she could not walk.

Lensa then said she “lied” as a way to break her work contract:

And even apologised for any pain she caused:

She's good for me. All good for me. Madame too. […] I like her. She like me […] This is my wrong. The video is my wrong. […] Now I am asking this family, Khalil family, I'm sorry about this video. This video, I didn't think this bring problem for them.

This version stands in stark contrast to what Lensa said in Amharic when her employers were not present.

The host then asked Crystel whether it was conceivable that Lensa is too afraid to speak the truth on live television given that she is forced to go back to their household afterwards. Crystel said no, claiming Lensa had had several opportunities to ask for help had she needed it. Crystel, it should be noted, was originally accused by Lensa of attacking her with scissors.

However, Human Rights Watch was told by two Ethiopian women who visited Lensa at the hospital that she did not tell investigators the truth for fear of retaliation.

In the original video, Lensa recorded herself saying:

[…] From the very beginning they were abusing me […] They tortured me and I couldn't do anything to save myself. They beat me everyday with an electric cable and wrapped my hair around their hands and dragged me around the room. They smashed my head into the walls. […] There were four of them abusing us. […] They took turns abusing us. […] He was pushing his fingers into my eyes. […] I said to myself, ‘How long can I carry on?’ […] There was another Ethiopian girl with me and the same things were happening to her.

Accusations of a “hidden agenda”

“Al Jadeed” approached “This is Lebanon” and invited them on the show, but the group refused “to participante in this media circus”.

During the episode and in other media appearances before it, “This is Lebanon” and other migrant worker advocates actually became a target of ire.

In a different report on the Lebanese Broadcasting Channel, Crystel said that “in the Khalil household, there is no violence.” She alleged that “This is Lebanon” has “hidden agenda” and was using the name Eleanore Couture to get attention. She also threatened them with a lawsuit, accusing them of defamation and complaining that the situation has affected business.

On the “Al Jadeed” episode, the lawyer, who was there to represent the Khalil household rather than Lensa, claimed that there was a conspiracy:

The situation we're seeing today in Lebanon is that there are a large number of organisations funded from abroad whose apparent goal is to support migrant workers. The truth is that there is a competition between these organisations to see who can get the media scoop. Whether it's true or not doesn't matter.

“This is Lebanon” responded to the episode in a long post, in both English and Arabic, with a list of demands including:

1. Ensure Lensa’s safety by removing her from her employer’s house to a place where she is no longer in fear of retribution from her employer for speaking truthfully.
2. Ensure that Lensa is getting the medical care she needs for a speedy recovery.
3. Provide Lensa with the opportunity to talk with an Ethiopian social worker that will reassure her of her safety, provide her with her options, and to empower her to choose whatever she sees best fit.
4. Demand a proper investigation

No guarantee of protection so Lensa could speak freely

Meanwhile, Lensa's aunt Ganesh said in another video released by “This is Lebanon” that when she went to visit Lensa at the household after her testimony had been posted online, she was initially not allowed to have a private conversation with her. This was confirmed by the Lebanese francophone daily L'Orient Le Jour which reported that she was allowed only after pressure on social media.

On April 6, Human Rights Watch published a report about the matter, in which they found:

The [Lebanese] Internal Security Forces told Human Rights Watch that they had completed an investigation after speaking with Lelisa, another migrant domestic worker in the house, the employers, two forensic doctors, and the Ethiopian Embassy, and sent their report to the prosecutor’s office. However, the Internal Security Forces said they had not provided Lelisa with any guarantee of safety or protection to ensure that she was able to speak freely. “It’s the job of the embassy to provide reassurances or guarantees,” an official said.

The Lebanese police and the Ethiopian embassy officially concluded that Lensa's allegations of abuse were untrue.

Migrant domestic workers in Lebanon have repeatedly demanded the end of the notorious Kafala system, which ties a worker's legal status to her employer, and the ratification of the International Labor Organization's convention 189, which ensures human rights be respected for all domestic workers.