Authorities in China have ordered a ban on NeihanShequ, a popular app for jokes and riddles, arguing that Neihan content has become too “vulgar” and “banal”.

On April 10, the State Administration of Press, Publication, Radio, Film and Television of China (SAPPRFT) ordered Toutiao or Today’s Headline, China’s most popular information platform, to shut down its affiliated social media application, NeihanShequ (內涵段子). Neihan allowed users to submit jokes and riddles in multimedia format, for others to comment on and vote up or down.

During the supervision of Toutiao’s rectification, SAPPRFT discovered that the company’s affiliated content application and public account, NeihanShequ, is heading a wrong direction with its vulgar and banal content. Netizens have strong reaction against such content. To maintain the order of internet visual and audio content and provide a clean environment, SAPPRFT ordered NeihanShequ to shut down its application and public account permanently. The company [Toutaio] has to learn the lesson and clean up audio visual content products with similar nature.

Launched in 2012, NeihanShequ’s application has had more than 14 million downloads. The application is a rising star among a dozen more popular content applications affiliated with Toutiao, which had an estimated USD $22 billion market value [2] in August 2017.

I sincerely apologize to the supervision authority, our users and colleagues. The product has taken a wrong direction against the socialist core value and has not fulfilled the responsibility of public opinion channeling. I accept the punishment and I should be the one taking all the responsibility.

Zhang also promised that Toutiao will strengthen self-censorship measures by increasing the pre-screen staff team from 6,000 to 10,000 people. [4]

The public reaction to the ban has been strong — many have expressed their frustration through humor, in keeping with the spirit of Neihan.

Some Neihan community members have created flashmob videos mourning the shutdown of the site. Most of these videos also have been taken down from public domain, but some are still available. Here is one backup video [5] on Facebook in which people collectively sing a mourning song. 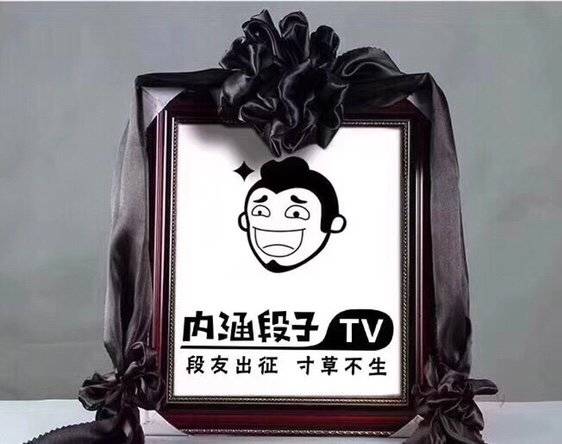 A widely circulated remix image mourning the shutdown of NeihanShequ.

Although most of the multimedia content mourning the shutdown has been censored, text content is still searchable. A widely circulated mourning statement read:

Weibo was turned into a zombie. WeChat was trapped in countless circles. And then, the loyal short video fighter, the great joker, family storyteller, our friend Neihan left the world on 10 April 2018. He lived for 2,314 days.

Trees and grass shed tears, fellows are in grief. Our friend Neihan lies in peace upon green pine leaves, covered with a colourful flag which symbolizes what he pursued throughout his life.

Tencent and Weibo could not attend the mourning because their accounts had been suspended. WeChat was incommunicado. QQ was undergoing system maintenance.

Other netizens have suggested that the ban was motivated mainly by the strength of the Neihan community, which could be seen as a threat to power, rather than by vulgarity or banality as stated by authorities.

Vulgarity is just an excuse. Weibo also has vulgar content. The main reason is that the community of Neihan was getting too strong.

Shutting down Neihan permanently. Are you afraid that the users’ organization power is stronger than a certain Party?

A country, a government, a supervision department. They are all scared of a joke-sharing application, this is such a joke.

Others have reflected on the strength of Neihan as a community and described the values that brought users together:

Neihan’s posts are far from vulgar and obscene. The community has a set of common values. They would not laugh at poverty, sickness, disaster or accident. They would not mock teachers, soldiers, doctors. The community looks down on those who violate the shared code. Though there is no more Neihan, the community still exists. Di-didi [Neihan's secret code].

I hope I can still share my feelings. Life is short and Neihan has accompanied me for two years. When I was lonely, I spent the nights with the app and had a good laugh. Now that it has to be shut down, I hope this is a rumor. But if it turns out to be true, I hope people won’t forget about it and I can still hear di didi [a secret code shared by Neihan community] when I walk down the street many years later. I believe in you all.

Neihan is not the only target in this latest crackdown. Authorities seem to be focused on multimedia content platforms, as content-based censorship on these platforms can be difficult.

Two other multimedia content platforms affiliated with Toutiao are under pressure to clean up their content. Tik Tok [6], a music video social media application, activated an “anti-addiction” function on April 10. Houshan, a video selfie-sharing application, has been temporary taken down by SAPPRFT.

Kauishou, a popular image sharing app, was pressured to hire 3,000 new staff [7] to pre-screen its content after SAPPRFT issued a temporary take-down notice early this month.