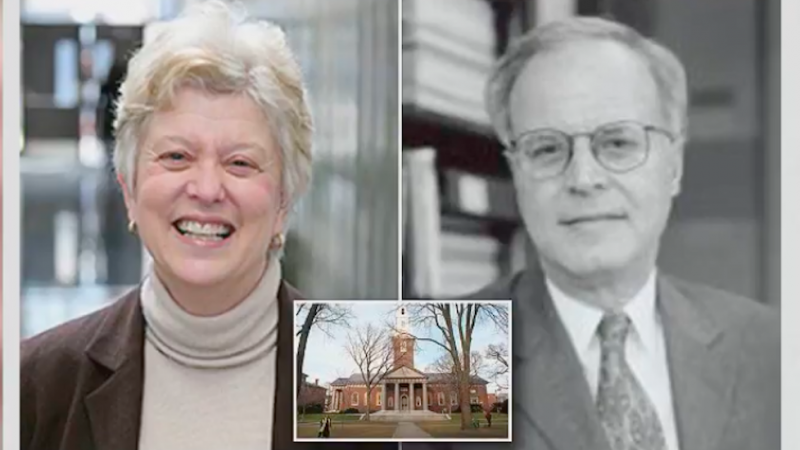 Terry Karl (on the left) and Jorge Domínguez (on the right) in a snapshot from the video shared by News Dongo regarding the case of harassment claims against the Cuban-American academic.

A post by Roberto Veiga, director of the non-profit group Cuba Posible, has ignited debate on social networks about sexual harassment in Cuba.

In a post on the association's Facebook page, Veiga recounts accusations of sexual harassment against the well-known Cuban-American political scientist Jorge I. Domínguez. A professor of the Fundación México en Harvard-Antonio Madero (Mexico Foundation in Harvard-Antonio Madero) at Harvard University who was placed on academic leave by the institution because of his actions.

In February 2018, Domínguez was the subject of an article in The Chronicle of Higher Education, a US-based trade publication, which alleged that he had systematically sexually harassed university colleagues and students since the late seventies. At the center of the claims is the case of female assistant professor Terry Karl, who has been denouncing Domínguez's lascivious behavior since 1983.

According to The Chronicle, after she had refused his physical advances on multiple occasions, Karl described walking with Domínguez through a wooded area of campus when he commented to her, “This would be a nice place for a rape.”

At that time, Domínguez was censured for his actions and placed on administrative leave for three years. Karl considered the measure to be a mere “slap on the wrist.” Fearing what Domínguez might do upon his return, she abandoned her position at Harvard.

Since then, and in the context of the #MeToo movement, 18 new accusations have emerged. For the moment, the university is investigating the accusations and The Chronicle of Higher Education is documenting them.

In his missive, Veiga expresses his appreciation for Dominguez and his work and questions the veracity of what has been published in the press:

Who can verify that this happened? If this did happen, who knows that it happened exactly as they said it did? Who wonders why everything is made public now and all at once? Who has claimed that one should not submit evaluative criteria to know exactly what happened? Who, convinced that everything has taken place according to the accusations, attends to the justice's demand to analyze his guilt without hoping to sully the virtues of the accused or his human dignity?

A subsequent editorial in the Harvard Crimson, a campus newspaper run by Harvard undergraduates, holds the University responsible for failing to protect a female professor from the power that Domínguez held.

Academics belonging to the Latin American Studies Association (LASA) — among whom the presidents of the Cuba Section can be found — signed a letter that circulated on social networks. The letter categorically rejects Domínguez's conduct:

Such behavior has no place in our organization. If harassment occurs within an organization, there must be a reliable and effective channel to make complaints and the authorities must apply public sanctions to the transgressors. […] we extend our solidarity to all who are survivors of Jorge Dominguez’s unacceptable conduct and its apparent long-term tolerance by Harvard University.

It is important to note that the LASA was presided over by Domínguez between 1982 and 1983.

A window into a structural problem

It is striking that in the debate that ensued within the Cuban networks, particularly on Facebook, those who supported Veiga's position were chiefly men while those who criticized him were mostly women. The comments cited below were taken from responses to Veiga's post on Facebook and summarize the spirit of those who took a stance against it. Two of the participants in the discussion are also recognized academics and researchers.

At the time of the debate, the Cuban-American Professor Eliana Rivero noted:

The usual thing: disperse doubts about women's testimony, because “one doesn't know.” In this sad case, the professional respect allowed a man – according to some other men – partially excuses him from his sins which have already been reported since 1983. And yes, the appreciation of a woman's physical beauty or achievements could be considered harassment if such appreciation includes physically touching her without her consent. To many, unfortunately, such “luck” corresponds to us, and it seems incredible that, at this point, our testimony is put into question.

For researcher Lisset Gutiérrez, the conversation around this is an example of how what happens to women continues being a secondary concern:

Each time that accusations come to light against someone whom we admire, respect, and/or are grateful to because of their achievements and contributions in other spheres of social life, [it is] us women who are the first to be hurt, to be deceived, and to be overshadowed. Because we realize that even for these men, the dignity of women is a minor theme, that they have to understand first in order to respect it and to defend it later. And in order to understand it, they put all of the resistance in the world, even though they have the facts and the arguments in front of them.

Somewhat transcending Veiga's post, Claudia Barrientos refers to what many see as an intention to discredit the denunciation of the #MeToo movement which many have wanted to put aside due to its American origins:

When they want to qualify the Me Too campaign as an americanisms, or an occidentalisms, etc., the only thing they achieve is reminding us all that machismo […] has hijacked places belonging to the left [where] by definition [the idea] should not even find a place. To begin with, the presumption that we are acting under their influence, or that we want to imitate models […] translates into an image of us as […] brainless [women], incapable of seeing the roots of brutal capitalism operating behind the scenes…