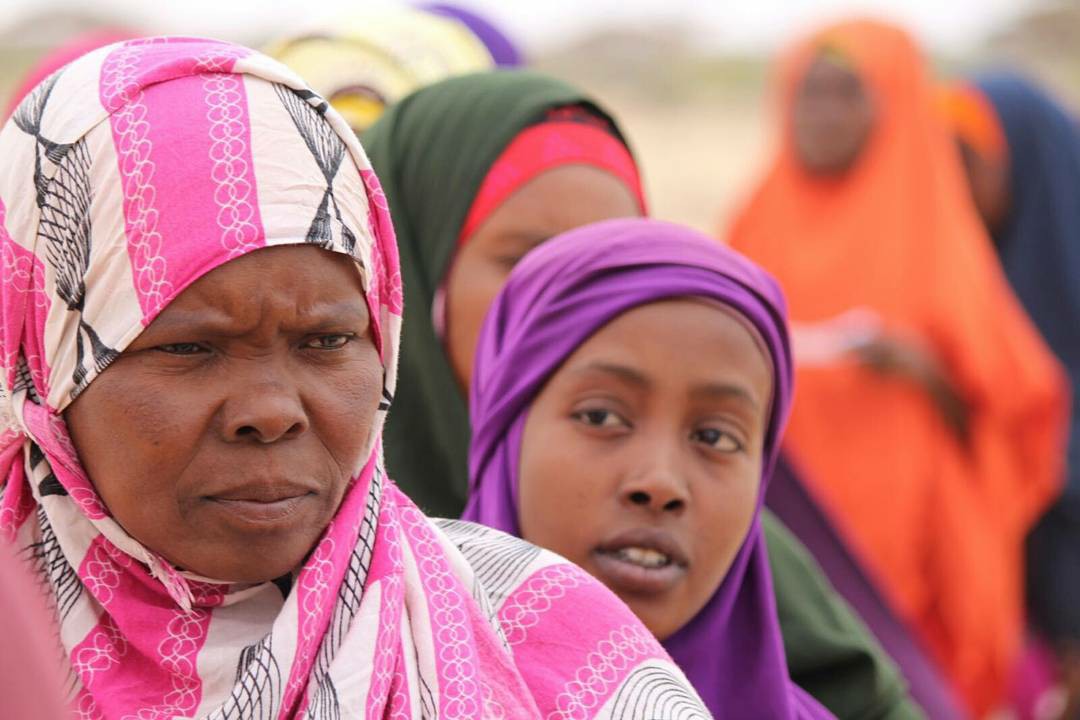 The enjoyment of the highest attainable standard of health is one of the fundamental rights of every human being without distinction of race, religion, political belief, economic or social condition.

Due to the long term trauma of civil war in Somalia, mental health is a massive problem compounded by the lack of public health facilities to deal with psychiatric illness. Somalia holds one of the world’s highest rates for mental health issues, with approximately one in three Somalis suffering from some form of mental illness, according to a WHO report.

Those with mental illness face extreme social stigma such as intentional isolation, restraint, and imprisonment because society fears they may hurt people or themselves.

Says Warsame, a pastoralist who lives in the rural area of the Mudug Region:

[a] 42-year-old took his sister to the clinic to find a treatment after being ill for years, Safiya had been ill for two years, and I decided to take her to the patient care center in Galkayo.

There are very few facilities available to treat people with mental illness throughout the country and the condition of these centers is grossly inadequate, often being too small for patients to get enough medicine.

Ahmed Bali, a psychiatric nurse at Galkayo Mental Health Central, the only center in Galkayo to care for people with mental illness, explains:

This center is public and is built by the community, and patients are all women and not charged for the services that we provide including accommodation and foods but the patients’ medicines are purchased.

Nigeria's youth suffer from drug addiction and a doctor shortage

According to recent reports, Nigeria in West Africa currently faces two serious health challenges: the menace of drug abuse and the brain drain of health professionals to Western countries.

Nigerians have seen a significant rise in drug dependency, especially among youth. According to Nigerian scholar Umar Lawal Yusuf and his colleagues, drug abuse is:

a disorder that is characterized by a destructive pattern of using a substance that leads to significant problems or distress. Teens are increasingly engaging in prescription drug abuse, particularly narcotics (which are prescribed to relieve severe pain), and stimulant medications, which treat conditions like attention deficit disorder and narcolepsy. Drug abuse or drug dependence (as preferred by the world health organization), is defined as ‘a state of psychic or physical dependence, or both on a drug, following administration of the drug on a periodic or continuous basis.’

Research shows that the drug abuse varies but that the most common ones mentioned in Yusuf's study are: alcohol (illicit gin or beer), cocaine, nicotine, phencyclidine (commonly referred to as PCP), and sedatives or anxiety drugs.

In addition, some Nigerian youths have also taken to the abuse of prescription drugs:

Everyday, over a 500,000 bottles of codeine are consumed by young Nigerians across the country, same with the intake of tramadol, rohypnol, marijuana, and other opioids, an alarming trend that has subtly eaten deeply into the Nigerian fabric with children of all classes having a field day abusing these drugs. But parents, stakeholders and the society continue to live in self-denial as a time bomb waits to explode.

Recent reports reveal that “over three million bottles of codeine syrup were consumed daily in Kano and Jigawa states” in northern Nigeria.

This Facebook video released by Tony Rapu shows some Nigerian men injecting heroin into their bodies in Lagos, Nigeria [warning: graphic video]. Nigeria youth are even “mixing methylated spirit and [Coca-Cola] coke to get high”:

Mixing this spirit with coke might douse the bad taste but it doesn’t change the fact that in a bid to get high, young people are slowly doing irreparable damage to their own bodies. Drug abuse has now become a hydra-headed monster. As appealing as the idea of placing stringent rules on the sale of drugs may seem, it is too obvious that it does nothing to solve the problem.

But drug abuse alone isn't the problem — there are so few doctors to cure them. The Medical and Dental Council of Nigeria is empowered to register doctors, but the exact number of doctors practicing in Nigeria remains a mystery.

Some reports claim “about 80,000 doctors and dentists in Nigeria including foreign trained personnel” registered in Nigeria.

out of these 80,000, there are some people who are dead, some have left the country, some no longer working as doctors and some have stopped renewing their practicing licences. Some of the older doctors have been given a ‘life time practicing certificate.’

To make matters worse, many Nigerian doctors are heading to the United Kingdom or the United States for better work opportunities. As of 2015, Nigeria faces a major shortage of qualified doctors according to WHO's recommended doctor/patient ratio:

The World health Organisation (WHO) standard ratio is one doctor to a community of about 600 people while the nurses ratio stood at one nurse to four patients and one environmental officer to 8,000 people.

Folashade Ogunsola, a professor with the Association of Colleges of Medicine of Nigeria estimates:

A survey entitled Emigration of Nigerian Medical Doctors, conducted by NOIPolls and Nigeria Health Watch, questioned 705 doctors residing in the country and abroad as well as 26 medical doctors who participated in in-depth interviews.

Some key findings were alarming:

A large proportion (83 percent) of doctors who filled the survey and are based abroad are licensed in Nigeria, indicating that they had completed their medical education in Nigeria before departing beyond the shores of Nigeria.

All respondents (100 percent) to the survey know medical doctors who presently reside in Nigeria, who are currently seeking work opportunities abroad. Furthermore, about one in two (48 percent) have between five to 15 friends and colleagues working in the medical profession who moved out of the country within the last two years.

The United Kingdom and the United States are the top destinations where Nigerian medical doctors seek work opportunities.

Akinola Olabisi, a doctor who recently emigrated to the United Kingdom, explains why he left Nigeria:

I considered the working conditions in Nigerian hospital where I initially worked as unsuitable. I had to cope with hectic working conditions made more difficult by the lack of basic hospital equipment, hostile working atmosphere, and measly salaries that were unpaid for several months. I was also not particularly motivated by the oppressive style of medical mentoring in many postgraduate training institutions. I do not intend to come back to settle in Nigeria.  Poor remuneration tops the list of my reasons for leaving. The vast majority of Nigerian doctors earn so little compared to their counterparts in other African countries. It is shameful to hear what some doctors are paid, especially in the private hospitals. Also, hospitals are unacceptably short-staffed and the available hands are severely overworked. This undoubtedly takes its toll on productivity and quality of health care.

Whether it's psychiatric illness and stigmatization in Somalia, the rising epidemic of drug abuse of Nigerian youth or the exodus of Nigerian doctors to the West, the state of health across the continent remains precarious.