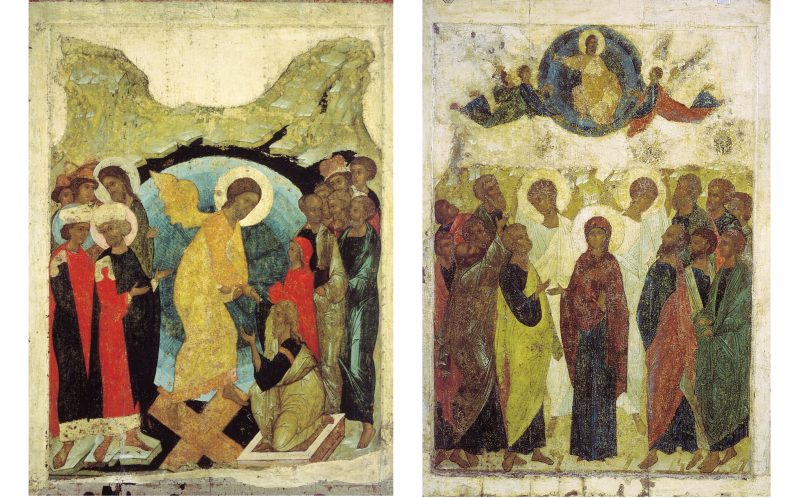 Communist rule was not always detrimental to art related to the Orthodox Christian religion, as attested by three examples of masterpieces that have found new life on the Internet.

A common misconception in the West is that in the countries ruled by Communist parties in the second half of the 20th century, the regimes enforced atheism on the whole population. The actual situation was much more complex; in practice, Communist authorities were not always opposed to religious institutions as long as they didn't challenge the dominance of the ruling party.

For example, while they promoted secularism and nationalized the properties of the church, Communist parties in Europe usually demanded atheism only from party members, who in turn obtained access to privileges and opportunities to become part of the ruling elite.

One of the programs of the Soviet Union was to establish state atheism since it viewed the religious institution as an integral element of the Russian Empire it replaced. But in 1941, Soviet leader Stalin stopped the anti-religious crackdown which started in 1926 in order to enlist the support of the Russian Orthodox Church as an ally to arouse Russian patriotism against Nazi aggression. This led to the revival of Russian Orthodox religious life and the influence of the church.

After the Second World War, most Central and Eastern European Communist regimes steered the national Orthodox churches into a docile state, often infiltrating the hierarchy with secret service agents. Such regimes also cultivated a milder form of nationalism, which included recognition of the historical role of the church in the nation-building process.

(One exception was Albania under totalitarian dictator Enver Hoxha (1946–1992), who led a violent campaign to eliminate religious life by closing down all places of worship to create “the first atheist nation in the world.”)

Re-purposing religious art and building upon its foundations

Religious art with high aesthetic value was also sort-of-nationalized, i.e. declared national treasure and managed by the state. This included turning churches and mosques into museums and re-interpreting religious music as part of the classical cultural heritage.

For instance, this 1986 recording of Tchaikovsky's Hymn of the Cherubim by the USSR Ministry Of Culture Chamber Choir (active from 1971 to 1991) has attracted over three million views on YouTube and has been widely shared ahead of this year's Orthodox Easter.

But more than any other form of artistic achievements made in religious context, the church architecture and visual arts were better regarded as examples of patriotic pride by most Communist regimes.

This inspired the creation of new works of art like the cinematic masterpiece Andrei Rublev (Russian: Андрей Рублёв). This 1966 historical drama film was directed by Andrei Tarkovsky and co-written with Andrei Konchalovsky, and is loosely based on the life of Andrei Rublev, the 15th-century Russian icon painter.

Besides the life of the painter, the film deals with the issues of ruling class corruption and treason, contrasting it with the resilience of the common people in the event of a foreign invasion. It was subjected to censorship allegedly due to its graphic description of violence, including cruelty to animals and actual killing of horses on camera. While it won international awards, Soviet authorities delayed its release within the country for several years. Tarkovsky claimed that in the end his final cut was based on his own decisions, reducing overly long scenes “with no significance” to shorten its length to 3 hours and 15 minutes.

In 2011, the Russian studio Mosfilm uploaded it as part of a collection of free classical films on YouTube.

Tarkovsky's film is available on YouTube in two parts, with subtitles in English, French, German, Italian, Portuguese, Spanish and Turkish:

The third example involves a mashup of the traditional with the new. The 1971 animated film The Bloody Battle of Kerzhenets (Russian: Се́ча при Ке́рженце) directed by Ivan Ivanov-Vano and Yuriy Norshteyn was set to music by Nikolai Rimsky-Korsakov and it used Russian frescoes and paintings from the 14th to 16th centuries. These images from the church walls are animated using two-dimensional stop motion animation.

The film also reflected the patriotic theme of surviving and overcoming foreign invasion (from the Pechenegs to Napoleon to Hitler). In this case it refers to the invasion of the Mongols-Tartars in the 13th century (who then ruled for 300 years), and the legend of City of Kitezh which mysteriously hid under water after the slaughter of the army.

In the film, religious imagery is used to inspire patriotic feelings. For example, the Virgin Mary with Baby Jesus appears side by side with Russian defenders. In 1971 and 1972 this animation won several awards at festivals, mainly in Central and Eastern Europe.

The misconception that religion was absolutely banned under Communist rule was not limited in the West. After the collapse of Communism in the late 1980s, this notion became part of the right-leaning mainstream narratives in most post-communist countries. Rising political influence of clericalism in these societies made the rumored collusion of state and religious institutions during the previous system a taboo topic for most historians and journalists.

Communist regimes indeed promoted an ideology that suppressed the freedom of religion in varying degrees, but their implementation lacked consistency. The actual practice was based on rational calculations whether it helps them stay in power. Populists today who undermine democracy across the world use a similar approach although many do not focus on promoting the artistic achievements of the church.

Instead of highlighting a black and white picture of ‘oppression vs martyrdom’, it is crucial to examine the complex relationship between the communist state and the church to better understand the mechanisms of authoritarianism.