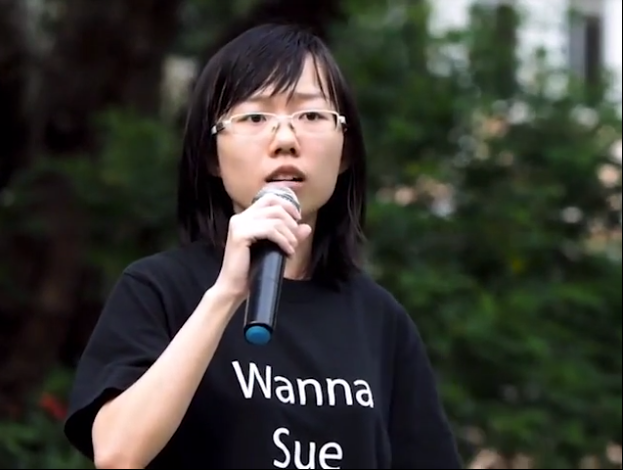 This article by Kathy Triệu is from Loa, a news website and online radio project of Việt Tân that broadcasts stories about Việt Nam. It is republished by Global Voices as part of a content-sharing agreement.

Han Hui Hui is a 26-year-old activist in Singapore. Though young, she has inspired the ire of Singaporean officials over the last four years for her efforts to raise awareness of the stifling political environment in Singapore and restrictions on speech and assembly.

In 2017, Hui Hui was scheduled to attend a human rights conference in Malaysia, but when she arrived she was deported upon the demands of the Singaporean authorities.

She continues to resist the government’s attempts to suppress her right to free expression, by speaking at international forums such as the Internet Freedom Festival in Spain, which she attended for the first time in March 2018.

Kathy Triệu (KT): This is Kathy Triệu reporting from the Internet Freedom Festival in Valencia, Spain. I’m here with Han Hui Hui from Singapore, who is an activist, and who led a session on our first day here. What would you like to tell people about Singapore?

Han Hui Hui (HHH): I think the only thing that Singapore has is [this] so-called “economic success”, and we do not have any human rights at all. This economic success is actually at the sacrifice of Singaporeans, especially in the public housing, public healthcare, as well as employment. Singapore has an economic success that is being admired by countries all around the world. But, it comes at the sacrifice of humans rights in Singapore. The first thing is public housing. Singapore is the only country in this world that doesn’t spend a single cent from a cash-flow perspective on public housing. Second, is public healthcare. We actually have [a] compulsory insurance scheme, the government forces people to buy, on top of private insurance. With this insurance scheme, the total premium that the government collects is actually more than the total amount of claims that the government actually have to pay out every year. The third thing is the right to retirement. In this scheme the government forces people to set aside about 30 to 40 percent of their salary.

KT: When I was at your session, I found it very interesting the way that the government has created laws in response to your activities. Could you tell me about some of those laws?

On September 27, 2014, through a lot of effort that we put in through 2013 all the way to 2014, we managed to get more than 6,000 Singaporeans to protest at this park. On that day, the government actually sent a minister there, and tried to set up all kind[s] of entrapments against us. They provoked the protesters into doing a lot of things. We are thankful the international community spoke up against it and supported us. But, ever since that incident on September 27, 2014, scenes of protest in Singapore actually disappeared. Nobody gathered at this park anymore, lest to say there are any protests. That was the biggest protest ever, since in the 21st century for Singapore. Since this protest, the government investigated about 20 people, and charged six of us. I was one of them. They disqualified me from standing for parliamentary elections because of this protest. Which means in the next elections, I won’t have the ability to stand.

KT: How were they able to ban you from participating in that election?

HHH: In Singapore, there is this law that says that if you have ever been fined more than 2,000 Singaporian dollars [1,520 US dollars], you would not be able to stand for election. In Singapore before you can protest, you have to tell the government you are going to protest. On their protest website, they have three options. You have to either give a speech, or you’re holding a protest, or you’re singing, which is performance. You can only click one of the options. I always click speech; all of us click speech. But, if you click speech, you will be charged for demonstration. And if you click demonstration and give a speech, you will be charged for giving a speech. Because of this glitch in the government website, the government [was able to] fine me 3,100 Singaporian dollars [2,360 US dollars] for giving a speech and protesting at the same time. It is more than the 2,000 benchmark. For that, I won’t be able to stand for election. This is the first time the government charged a person for protesting at the park; it has never ever happened before.

I’m not sure why they target me. Last year, in June, I went to Malaysia for a human rights event. I stopped posting online for about three months. I did not respond to anyone through my phones or email because I know they’re being surveilled. It was strange because for the first time in Singapore’s history they told the Malaysian government to deport me back to Singapore to stop me from attending the event. They said, “I’m a national threat, and if were to go in I would affect their bilateral relationship.” With that, Malaysian immigration deported me back to Singapore.

KT: How has the government responded to your creative ways of going about expressing your thoughts?

HHH: I think the government responds by creating more laws. The reason why I even started protesting was they sent me a letter to sue me for defamation in 2013. That was when I realized something was wrong so I tried to question it. I did some research, and I realized in Singapore there’s this park where you can protest. That was when we actually held our first protest.

They also created a lot of different laws. Last year I was imprisoned. After my imprisonment, I came out and I talked about how inhumane the treatments were towards the inmates.

KT: In Việt Nam, we face also very stark conditions for activists, journalists, bloggers. The way the government represses speech is very different. We have three penal codes often used to convict activists, such as Article 79 that talks about “conducting activities aiming to overthrow the government.” The case in Singapore is very different. It seems over the past few years more laws have been created to repress speech. What are some ways in which you are trying to approach this problem? How will you continue to organize even with the creation of all these laws?

HHH: The other thing is, I think a lot of Việt Nam government officials are being trained in Singapore now, and they [may] bring a lot of laws back to Việt Nam. Even though we are so-called “have a lot of laws,” they all stem down to criticizing the government and asking for transparency and accountability. I think as a region, we need to support each other because Singapore is seen as the leader right now, and all other countries are following these laws. By having so many laws that they are trying to suppress the citizens. They can say, “everyone is being charged with different laws, so they are not against [anyone specifically].” But the fact is all this is being used against the people. If the government would just care for the people and [protect] fundamental rights to housing, healthcare, education, nobody would be criticizing them. Nobody would even believe in us.

On the last day of the Internet Freedom Festival, Kathy Triệu caught up with Hui Hui once more to ask her how her week went.

HHH: I think this is a very interesting week for me because it’s the first time Singapore is here. I realized a lot of people were really shocked when I tried to share about what’s happening in Singapore with the numerous laws that have come out against freedom of expression. I also learned a lot from other people in other countries. In my country we have a lot of propaganda telling us we are the best and other countries are bad. But actually I realized there’s a lot we can learn from each other.

KT: Do you have any other words you want to share?

HHH: I hope that countries around the world don’t follow the Singapore model. Advocate and have your independent labor unions and student unions because we don’t have that in Singapore. Appreciate everybody who is fighting for you because in Singapore, everybody has left for asylum or is in exile. It’s very lonely when you’re fighting alone in Singapore.

This is part of Loa's special coverage of the 2018 Internet Freedom Festival. Listen to the interview which starts at 6:11.