Education Against the Odds: How a Student and Mother from Afghanistan’s Central Highlands Stole Social Media's Heart 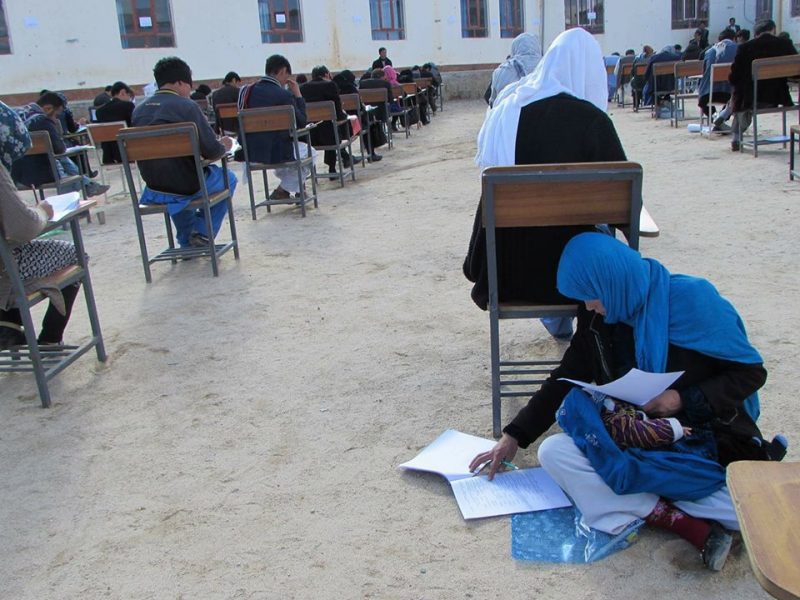 Image shared on Facebook by teacher Yahya Erfan, widely shared and used by media outlets across the world.

The image was one that spoke of love and determination.

In mid-March, a student sheathed in a blue scarf took an exam on the floor of an outdoor classroom in provincial Afghanistan with a baby lying across her lap.

Yahya Erfan, a professor at the university where the exam was taking place, took a photo of the scene and posted it to his Facebook account.

The 25-year-old woman in the photo, Jahantab Ahmadi, sat cross-legged, her face bent over her exam papers in concentration as her two-month child bawled due to an earache.

Jahantab, a mother-of-three, hails from the remote settlement of Hoshto, in the Miramar district of Afghanistan’s Daikundi province.

To sit the exam in the provincial capital Nilli, Jahantab had to travel two hours on foot over coarse mountainous terrain and a further nine hours on public transport along a rough, bumpy road.

The photo became a source of inspiration for social media users in a country where timelines are too often full of the news of bloody attacks.

Inspiring photo from social media: this mother is taking university entrance exam while taking care of her child, in Daikundi. Afghan women are unstoppable. pic.twitter.com/lus0eeuH48

Twenty years from now, that child will see this photo in a better Afghanistan (…where the wars, the suffering will become history, photos like these a reminder of the strength of those who stood firm in the face of it all) #fb https://t.co/wuJ0v5f2Or

Despite coming from a conservative society, where many men oppose women’s education, Jahantab is fortunate enough to enjoy her family’s support and admiration.

Her husband, Musa Mohammadi, who comes from a poor family, has been a vital pillar of support.

Shortly after the photo appeared on social media, the pair had reason to celebrate — Jahantab passed the university entrance exam known as the kankor, scoring 152 points out of 360.

Jahantab’s story triggered offers of financial help both inside and outside the country.

One UK-based organization, the Afghan Youth Association, recently launched an online GoFundMe campaign to help pay for her university fees.

The campaign has so far raised more than $14,000 – a fortune in a country where about 39 percent of the population lives in poverty.

Thanks to the campaign and other funding, Jahantab is now enrolled at a private university in Kabul where she majors in Economics.

Afghan social activist Zahara Yagana was a key mover in attracting aid to Jahantab's cause and has been posting updates on the young student's progress.

Despite the billions of dollars put into education by international donors, illiteracy, especially female illiteracy, has remained a hard-to-solve problem in the post-Taliban period.

A 2017 survey conducted by the Central Statistics Organization reveals 84 percent of Afghan women are illiterate and only two percent of women have access to higher education, a figure that shrinks to virtually null if the country's major cities are taken out of the equation.

A 2017 Human Rights Watch report charting the decline of girl’s education in the country, said that “an estimated two-thirds of Afghan girls do not attend school”.

HRW also found the development efforts of the government of Afghanistan and its international partners have “significantly faltered” in recent years, as the country's strategic and military importance to the West diminishes.