Bangladesh Is the World's ‘Most Vegetarian Country'? Not Quite. 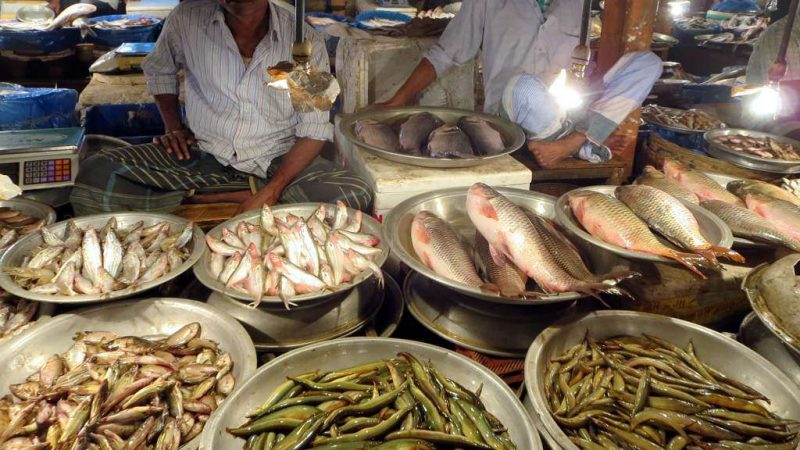 Fish on display in a fish market in Sylhet. Image from Flickr by David Stanley. CC By 2.0

A recent article published by British newspaper the Telegraph named Bangladesh as the “most vegetarian country in the world”. The report cited a 2009 study by the Food and Agriculture Organization of the United Nations which showed that only four kilos of meat are consumed by each Bangladeshi in a year, a stark contrast to the 120 kilos of meat consumed by a person in the US.

However, social media commenters were quick to point out that the label of “vegetarian” was inaccurate: Bangladeshis consume very little meat because fish is a traditional staple and because meat is generally expensive.

Sumit Kumar Banshal from New Delhi, India, warned readers to base their judgment on the Telegraph's article in its entirety, not just on the misleading “vegetarian” headline:

Secondly, Bangladesh is a fish eater country at first place so there should be less consumption of meat!!

Very ill-use of statistical inference in this article!!

Bangladesh is one of the most populous countries of the world with an estimated 163 million people in 2016 in an area of 56,980 square miles (147,570 square kilometers). It has a largely agricultural economy and the staple food of Bangladeshis is rice, fish, and daal (lentil) with a wide range of other curries. Bangladesh is renowned for its sweet water fish cultivation and it stands fourth in the world in terms of fish production.

Given that it is a majority Muslim country, proteins such as beef and poultry feature more prominently on menus that include meat. However, a lot of vegetarian dishes are common in households, because average Bangladeshis, especially those living in rural areas, often cannot afford meat as a component of all their meals.

I'm not an expert by any means, but to my knowledge, Bengali culinary heritage is mostly all about fish and vegetables. While growing up in Dhaka in the late 90's, beef/chicken were not everyday items served at home. Sure, Bangladeshi food has some amazing meat dishes (e.g. kacchi, tehari, kababs etc etc.), but these are still fairly “modern” introductions to the cuisine. Also, meat is still super expensive for the average person/family in the country.

According to an op-ed in the Dhaka Tribune by Mahmood Sadi, “The per capita meat requirement of Bangladesh is 43.25 kilos, but the availability of it is only 9.12 kilos, indicating an almost 79 percent deficit. Because of the lack of purchasing power, the consumption came down to about four kilos.”

The lack of purchasing power indicates that meat is becoming dearer in Bangladesh for a variety of reasons. Sadi notes that almost half of the meat consumption in Bangladesh is red meat, mostly from cows. Bangladesh needs more than 3 million cows to meet the demand; around 1 million cows are sourced from within the country, and the rest are legal and illegal imports of cows from neighboring India.

In 2014, Indian Prime Minister Narendra Modi and his Bharatiya Janata Party (BJP) party came to power and took a number of steps to protect cows as cattle are considered sacred in the Hindu religion. In the subsequent years, India has allowed fewer cattle to be exported to Bangladesh, which led to a 50% spike in the price of beef, significantly more than the world average. As a result, beef is now a luxury for many poor in the country and there is an increase in consumption of other forms of protein. 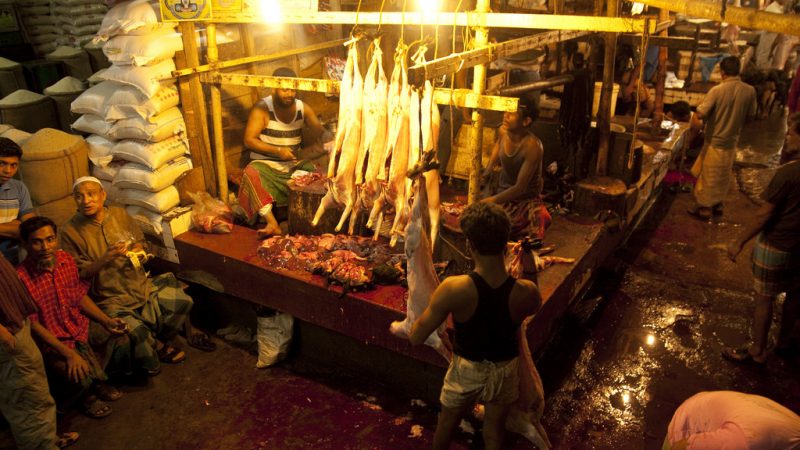 Some opinions were harsh in criticizing the Telegraph claim, which earned coverage in some local news outlets of Bangladesh. Shayan S. Khan, a commenter on Facebook, lashed out:

It's bad enough that some travel journalist at the Telegraph goofed up badly trying to be clever with some statistics, it's way more tragic though when it gets unquestioningly republished in our media, the level of daftness is unbearable.

Is it an achievement?
Or the glass is half empty point of view.
The lowest per head protein consumption! https://t.co/Kwg6a7VnHx

Many pointed out that the majority of Bangladeshis do not adhere to a vegetarian lifestyle; the president of the Vegetarian Society of Bangladesh claimed only a very small portion of people may be vegetarians. Marie, the author of a vegan travel blog, noted that in Bangladeshi cuisine there are often traces of meat in the food and its hard to get a decent vegetarian meal.

You can’t even find a decent vegetarian place in Bangladesh less talk about most people eating vegetables mostly!