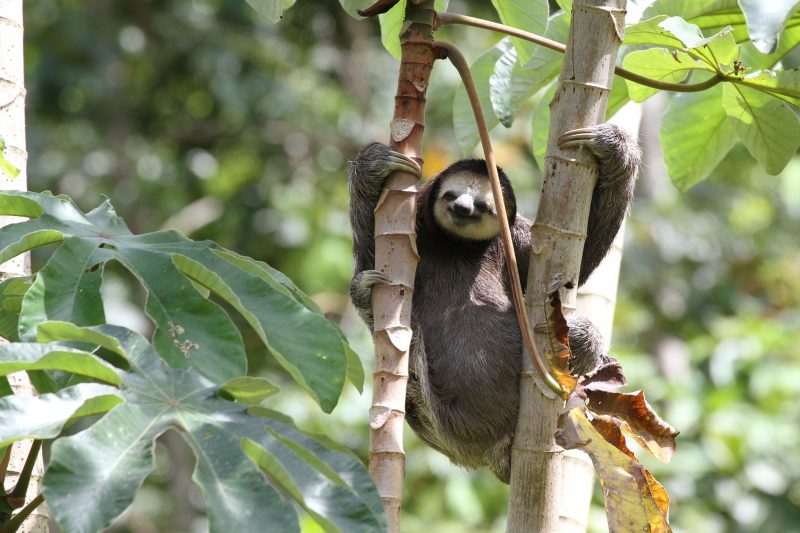 A sloth in the wild in Suriname. Photo by Stellar Tsang, courtesy the Green Heritage Fund Suriname, used with permission.

One conservation organization in Paramaribo, Suriname, is putting its efforts into rescuing wildlife and preserving their habitat. Started in 2005 by Monique Pool, Green Heritage Fund Suriname advocates for animal rights by educating people.

While Suriname is a lush country, city areas impacted by deforestation are pushing animals out. The Green Heritage Fund is working to help those animals — sloths, mostly — as well as preserve the ecosystems for dolphins and other marine life.

Global Voices spoke with Pool about the important work her organization does. 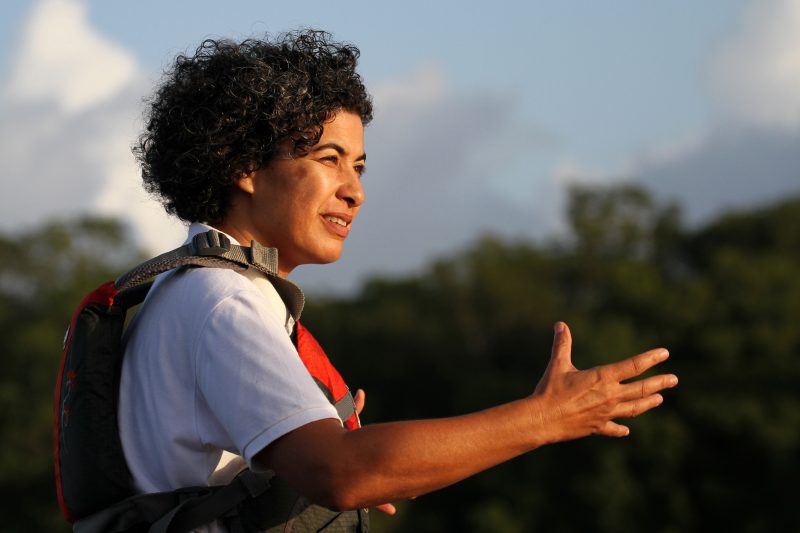 Monique Pool (MP): I think most people think we are either running behind sloths and anteaters, or maybe watching dolphins all day. I wish…but actually, we have a lot of tasks. We plan for new activities and then in between, we get calls for rescues. Sometimes we have one rescue a week and sometimes we have two rescues in one day. 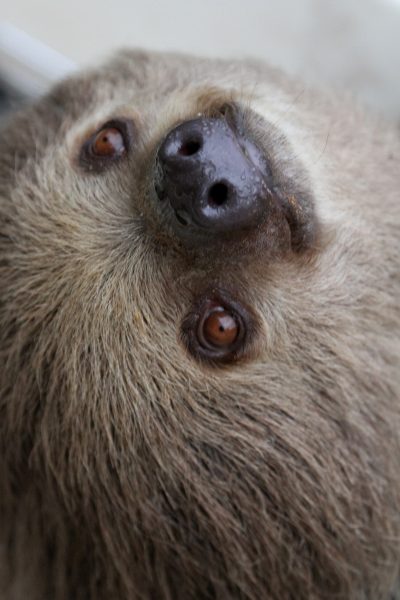 Close-up of a sloth that was rescued by Green Heritage Fund Suriname. Photo by Stellar Tsang, used with permission.

GV: Tell us about some of these activities, and your goals as a non-profit.

MP: We have four programs. The Xenarthra Program is basically the rescue, rehabilitation and release of wildlife. It’s also about [preserving] the ecosystem that they live in, to ensure that there’s enough left. We’re not just the normal conservation organization. We’re also looking more and more at the wildlife welfare of animals that are losing their habitat, especially in the city.

The second program is the Dolphin Program. While that's the one species the program is focusing on, we also started looking at the broader picture — all the animals that share the ecosystem with this dolphin and the health of that ecosystem. Together with WWF Guianas, the Nature Conservation Division of the Suriname Forest Service, and the Protected Areas Commission of Guyana, we’re actually implementing a regional Marine Spatial Planning project. In the end, the aim for that program is to have a marine protected area.

Our third program is Education and Research. For us, education is the main focus of what we do because we feel if you don’t raise awareness or don’t educate people, you will never be able to protect areas. Education is a really important part of our efforts. It’s cutting through all of our programs and education, of course, includes advocacy.

The fourth program is Green Community Development. If the community invites us, we help them look for alternative ways of earning money.

GV: Why did you decide to focus your energies on the well-being of sloths?

MP: It’s more or less of a coincidence that we started doing that. I had lost my dog and while I was looking for him through the Animal Protection Society, I volunteered to take care of a baby sloth. Then I started becoming interested in why specifically sloths were being reported [to the Animal Protection Society] so much. We started focusing more on that whole group because they are very special animals — not just the sloths, but also anteaters. I became more and more curious, and started looking online for resources.

GV: How have development and deforestation impacted the lives of sloths in Suriname?

MP: All wildlife that shares the habitat with the sloths are affected when there is deforestation — but sloths are so slow, they cannot get away. The moment the machines start coming in, the monkeys will flee, the birds will go away, the snakes will leave because of the ground moving in a certain way. The animals will be gone, with the exception of the animals that are too slow to do that. These include the sloths, the silky anteaters (small anteaters that live very high in the trees), and the tree porcupines.

When we do the rescues, those are the animals that we mostly catch. We normally release all healthy animals within a week.

Deforestation is happening in the interior where there is illegal gold mining, but those areas are already heavily hunted, so there is not that much wildlife. Most of our animals come from the coastal zone, with maybe 96% coming specifically from the city. 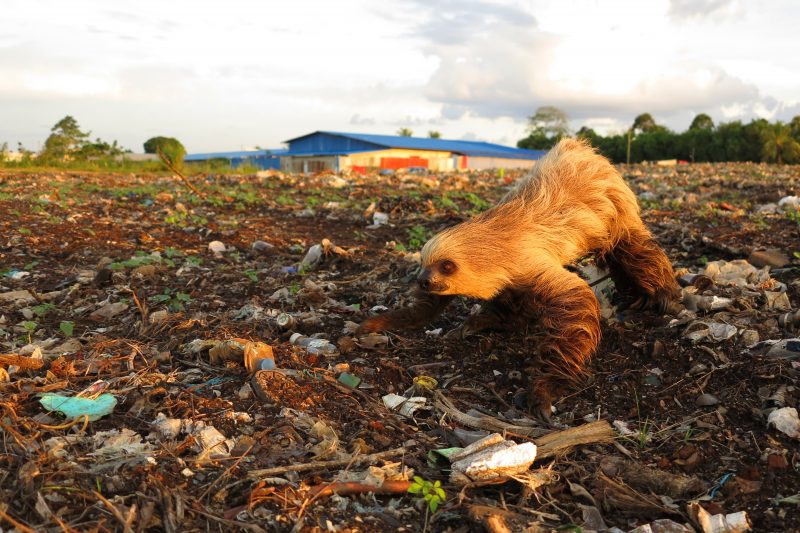 A sloth makes its way along a heavily polluted piece of land in Suriname's capital city, where many animals are in danger of losing their habitat. Photo by Stellar Tsang, courtesy Green Heritage Fund Suriname; used with permission.

GV: How do you care for the sloths once they come to the sanctuary?

MP: First, we assess their health status. If they are healthy, we release them within two to three days. Because of the hunting going on in Suriname, we normally do releases [in areas we deem safe].

[For injured animals], the most challenging part is providing food that they will eat. Once the animals eat, you can provide the full treatment they need before releasing them. But if they refuse to eat, they will die, even if they get the treatment; then, we need to make a decision about what to do. Sometimes we will release an animal if we see that being in the forest and being able to take care of itself will heal it. But we don’t do that very often — almost never — because a weak animal or injured animal is just food for predators. 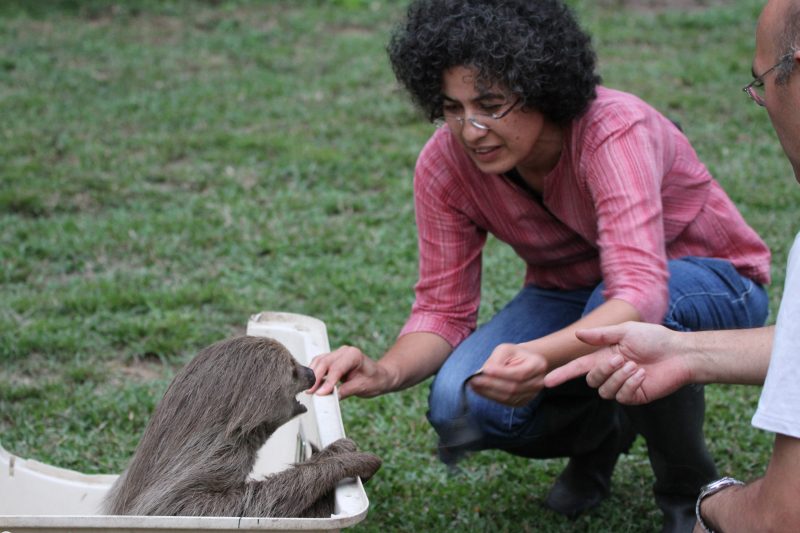 Monique Pool and a member of her team with a rescued sloth. Photo by Stellar Tsang, courtesy Green Heritage Fund Suriname; used with permission.

GV: What is the most difficult aspect of your work?

MP: When we have an animal that is really badly injured, the most difficult part is having to deal with people’s awareness about what they did to the animal. I remember this one animal — people had caught a two-fingered sloth because they wanted to eat it. Then they thought it was pregnant and because they didn’t want to eat a pregnant animal, they tied it up and let it sit in their yard. After maybe ten days, they called us. The wire had completely ruptured through the flesh of its leg and we had to euthanize the animal after we brought it to the vet.

For a week or more, the volunteer and I…we just couldn’t sleep thinking about that. It’s not just dealing with the suffering of the animals, but the ignorance of the people. That really gets me most, the ignorance.

GV: Conversely, what is the most fulfilling part of what you do?

MP: It’s an incredible thing that I am living in a country where these special animals live, where we can see them in the wild and where they still have reasonably untouched habitats. It’s just something I appreciate very much, that I live here — not just where sloths live, but also where these amazing dolphins live. It’s something I’m very grateful for. I’m grateful that I can speak on their behalf and help protect their habitat.

GV: How can people help your organization and the work that it carries out?

MP: There are two ways. One is to spend time, helping and volunteering with us. There can also be volunteering from a distance. There is a form on our website, where it says ‘Volunteer’. People can fill out their name, tell us what their skills are and how they want to help us. For example, our website administrator lives in the United States.

The other thing, of course, is donations. We live off of donations. That would help continue this work.

GV: How do you use social media to gain support and raise awareness?

MP: We use social media to emphasise our message ‘a wild animal belongs in the wild’, and we use the #notapet hashtag in a lot of our posts. We actively use our Facebook page to raise certain issues and we have used social media to promote a petition we started in 2011 and repeated in 2013 to fight against the selling of wildlife in the streets. 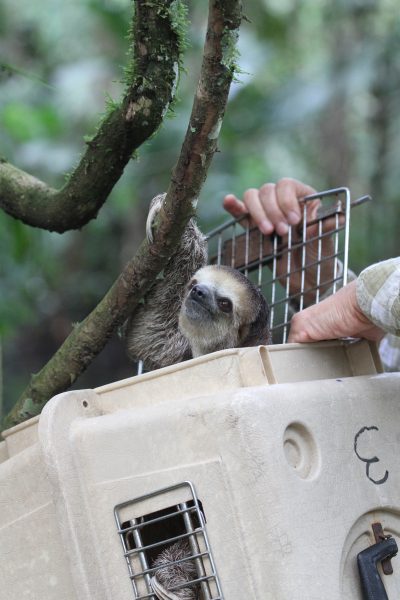 Monique Pool releases a rescued sloth back into the wild, where it belongs. Photo by Stellar Tsang, courtesy Green Heritage Fund Suriname; used with permission.

GV: Is there anything people may not realise about the kind of conservation work you do?

MP: One thing that is really good for people to know is that we do not keep animals in enclosures. There are a lot of people who call and say, ‘We want to come and see the animals’, or want to touch them. We don’t have animals in cages. We absolutely don’t do hugging. We ourselves even limit how much we touch the animals. Sloths are solitary animals, so they are not used to social interactions, even within their species — so you can imagine how other types of interaction can be very stressful for them.

Instead, we take people on releases because we have so many rescues and releases. It’s often a very beautiful moment, because you can see when they are sitting in a cage [on the way to being released], these animals get really depressed. Once you release them, you can actually see how their energy changes; how they get off into the forest, and it’s really amazing to see that. We allow people to take as many pictures as they want, because of course this is what we want to promote — that wild animals belong in the wild.