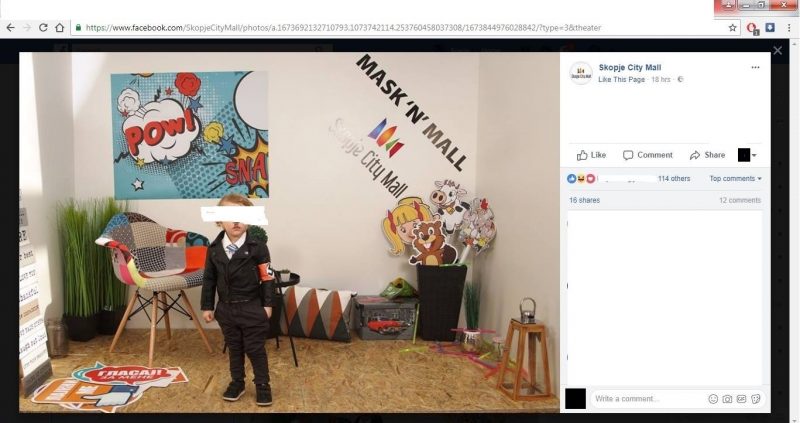 Screen shot of a photo of a child dressed as Hitler submitted for Mask'n'mall contest, edited to hide the child's identity and the identities of people who shared/liked/commented.

It probably sounded like a wholesome social media branding opportunity: A mall in Skopje, Macedonia, hosted a masquerade competition for kids to celebrate April Fool's Day, in which parents uploaded photos of their little ones in costume and winners were determined by the number of “likes”. Prizes included gift cards, Bluetooth speakers, and mugs with the photos printed on them.

What could possibly go wrong?

However, then the “Mask'n'mall” contest published a photo of a small boy dressed in a homemade black Nazi uniform, complete with a swastika armband and a haircut and mustache similar to Adolf Hitler's.

An angry backlash by Facebook users quickly ensued, and several online media outlets reported about the scandal. A few hours after it was posted, the contest organizer removed the photo from their Facebook page. However, social media users refused to let the discussion die, and re-posted screenshots.

Some users speculated that the parents were trying to ridicule Nazism or make some sort of statement with the costume (other than endorsing the Third Reich), but a majority of commenters simply expressed disgust over “portable Adolf”, as the incident came to be called.

A similar line of discussion took place on Twitter, with some trying to justify the act by invoking Charlie Chaplin in the 1940 film “The Great Dictator”. However, such points of view were usually met with derision.

[For April Fools’ Day] children usually dress up as their heroes. And yes, this is not funny.

All right, I can see that the parents provided the costume for the kid. But I can't imagine how they explained the costume to him? “Son, you are now Hitler, an uncle that killed Jews because he didn't like them, my dear mommy's boy ?”?

Antisemitic and pro-Nazi messages are not unusual in Macedonia, which only recently moved away from under the increasingly authoritarian rule of the VMRO-DPMNE party. Even though Macedonian law prohibits hate speech, works by Hitler are freely disseminated and promoted.

Following the masquerade scandal, some Twitter users warned about this phenomenon:

By the way, on the top shelf in a major supermarket, in a very relaxed manner, they sell the books “Mein Kampf” and “The Jewish Question” by non-mister Hitler. But I am sure that someone will appear to explain “that it's not so horrible, that it might just be a matter of disagreement with different opinions and styles, so all is OK, chill”.

Just few days ago, human rights expert and activist Zharko Trajanoski posted a photo of a selection of titles at a “mini book fair” in another shopping center, with a sarcastic comment: 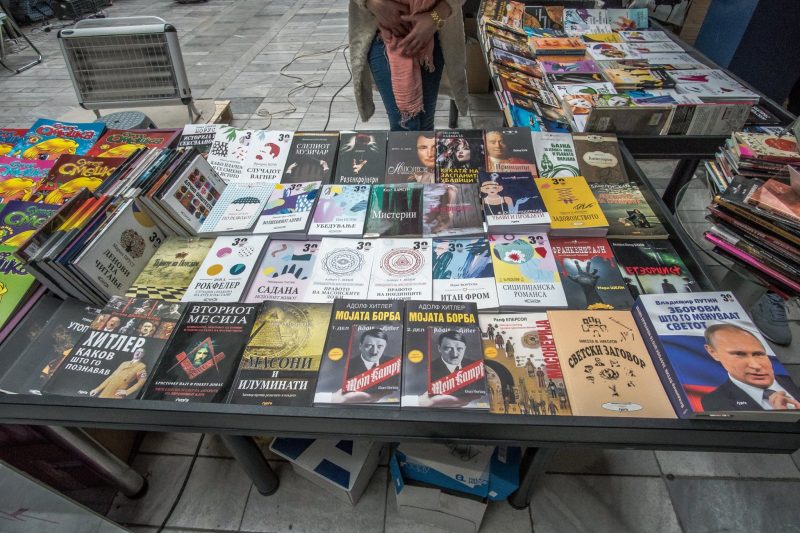 “What a ‘super funny’ offer. Hitler, Free Masons, Illuminati, conspiracy theories and Putin all in one place.” Photo and comment by Zharko Trajanoski, used with permission.

Yet another Twitter user pointed to the hypocrisy of people condemning Hitler masquerade incident who themselves promote nationalism, which by definition divides the people into “us” and “them”:

Everybody was appalled by the poor kid dressed as Hitler. Who, we all know, was racist and a Nazi.
Even those who shouted “Death to Albanians” [using an ethnic slur] and “For a clean Macedonia” in the streets, which is exactly what Hitler was all about.