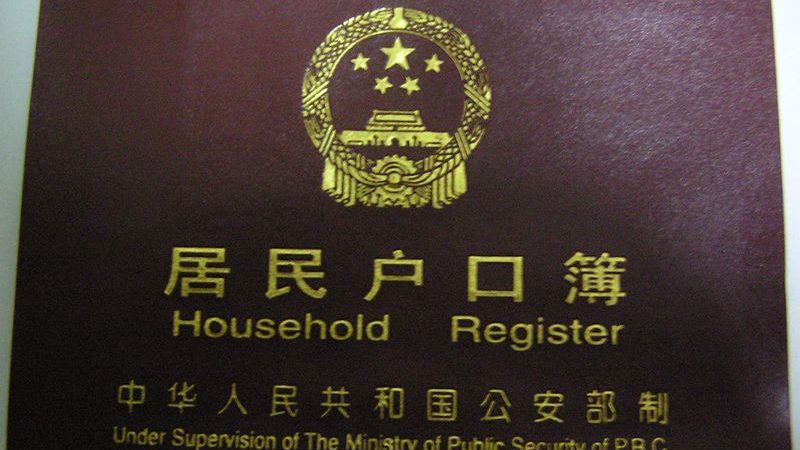 Hukou document from Wikipedia. CC: AT.

The Shanghai Permanent Residency Management Rule, which requires mainland Chinese who acquired foreign nationality or took up residence in other countries to either cancel their resident registration or face the consequences of the hukou system [2], which becomes effective on May 1, 2018.

The hukou, or household registration system, goes hand in hand with certain rights, especially for residents of big cities, who can enjoy freedoms like electing their district representative, holding a bank account, purchasing local property at a lower rate, and accessing education and retirement pension. Many mainland Chinese who have bought property and migrated to other countries have not cancelled their hukou.

While the parameters of the policy are not yet clear, it appears that for those who fail to cancel their hukou, power reverts to the police, who would do a mandatory cancellation.

According to the Chinese Communist Party mouthpiece Global Times, the new rule [3] is to assist government’s anti-graft campaign [4] as it would create another barrier blocking corrupt officials from leaving China.

But, as @FightEagle2017 pointed out on Twitter, the policy implication is a big deal for overseas Chinese:

[Mandatory cancellation of Chinese hukou] Recently Shanghai has become the first to announce the mandatory cancellation of household registration targeting overseas mainland Chinese. The policy would be implemented in other regions as well. Majority of [the dual citizenship holders] have properties and bank deposits inside China. They kept their Chinese ID card for their accounts. Once their hukou is cancelled, they can’t use their ID card. It is very difficult to hold property and bank accounts with foreign passports or green cards. Moreover, how could they keep their properties legally is another question.

People have been sharing their diverse opinions [7] on Weibo, one of the most popular social media platforms in China. For those who support the policy, they regard dual citizenship as the equivalent of wanting to have your cake and eat it too:

You have left the country and settled down in other countries, but you refuse to cancel your household registration. This is like carrying two ID cards with two different addresses. Why should some people enjoy such privilege?

Yes, it is true that when they live in a foreign country, they don't draw on our resources, but they also have not created wealth! They spend money overseas and don’t have to pay taxes here. They participate in building other countries, but don't work with our own people. Why then, do they still keep their nationality and household registration? They just want to take all the benefits from both sides. This is unfair to those who are loyal to our land.

Those against the policy, meanwhile, are pointing out the difference between citizenship and nationality:

Please don’t laugh at those who have the ability to settle outside China. Many overseas Chinese are still loyal to China and want to contribute to the country. The cancellation of hukou will chill their hearts.

Taking up residence outside China and getting a green card don't mean that I have changed my nationality. [The green card] is just a resident visa. It is similar to the resident document issued in Shenzhen; they cannot cancel my household registration back in my hometown.

There are many reasons for leaving the country. Similar to rural peasants working in the cities, some people are just taking jobs. Eventually, they will return and still keep their property and assets back home. Of course, if the person has changed their nationality, it is reasonable to cancel their household registration.

The news has shaken overseas mainland Chinese communities, as the cancellation of hukou may imply that they might not be able to receive their retirement pension or sell properties they own. Many are also concerned that other big cities will follow in Shanghai's footsteps and ban dual citizenship.

Amidst this panic, the Shanghai public security department explained that the details of the policy have not yet been decided upon, since the authority is yet to provide a clear definition of what “taking residence in other countries” means. At this stage, those who live overseas but have not changed their nationality or acquired dual citizenship, appear to be exempt.

Still, the clarification is too vague and has failed to address people’s concerns. @dd201704 mocked the tone of the policy change:

Shanghai’s property prices were about to drop? The policy has been retracted… false alarm? The policy can change all of a sudden, today it is made public and people are in shock, then it's withdrawn. What will come next? Who will still dare to keep property in China? Many of my friends are planning to sell their property and withdraw money from the bank… just in case another round of land seizure [similar to the 1950 land reform] might happen.

There is also much speculation over the rationale behind the policy:

The policy concerning the cancellation of hukou would be a hard blow to those who get double benefit from their dual citizenship. However, the real intention is to make it more difficult for those who want to move their whole family and all their assets outside of China. If you decide to have your family migrate to another country, you have to cancel your hukou, and your property and bank accounts would have to be transferred to your extended family members to be taken care of. This will induce risk and it means that in the future, people will use the strategy of chain migration, leaving the country one by one instead of the whole family together.

The reason behind the hukou cancellation is the worsening of the economy — they want to cut the retirement pension for those who have left the country. The amount of pension received by those who have left the country is huge. Many people applied for early retirement before they left the country. The cancellation of their hukou would end up saving a lot. The social security system in many Western countries would not cover overseas citizens [unverified claim]; maybe China is following the practice. Such a policy is correct: if they are not living in China, the government does not need to be responsible for their social security.