In the Wake of a Fatal Fire in Russia, Official Numbness and Online Trolling Stoke Outrage 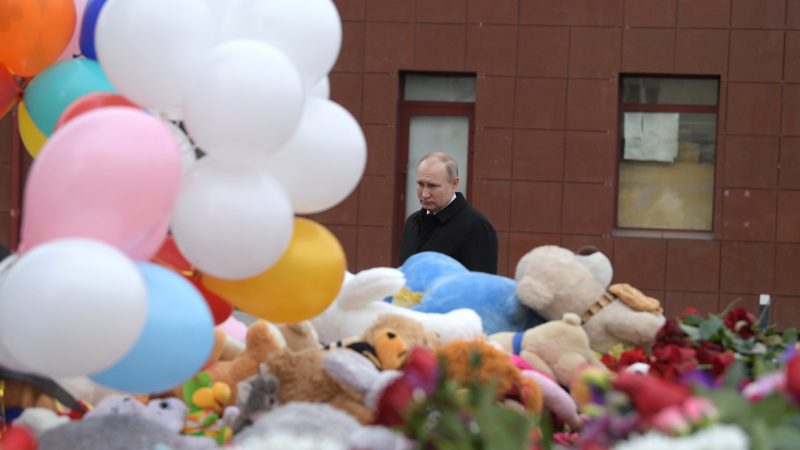 Vladimir Putin visited a makeshift memorial to victims of the Kemerovo mall fire as Russians complain about the numbness of the country's official reaction to the tragic incident // Credit: kremlin.ru. CC BY 4.0

On March 25th, a large shopping mall in the Siberian city of Kemerovo burned down and killed over 60 people —  many of whom were children. In the days and hours that followed, the city’s residents have heavily criticized the regional and city administrations for their botched crisis management, and the first responders for what they feel was a slow response.

As these residents take to the streets and the internet, the online Russian bot machine, geared as it is towards domestic conversations, has focused on downplaying the residents’ outrage and shifting blame away from state officials.This campaign also reflects the dismissive and often heavy-handed treatment state officials have been doling out to the families of the deceased.

As opinions heat up, both on the streets and in the online sphere, many feel that the use of online trolls has lead to an environment of misinformation and mistrust.

The fire seems to have started near a children’s play area and quickly spread, trapping many people including dozens of other children who were in the mall’s movie theater. As reported in Meduza, a Latvian-based Russian news website, the families of those still trapped in the blaze stood in disbelief as the first responders took a seemingly long time donning their gear, dissuading distraught onlookers from going into the mall to rescue their children. Though this last point is, perhaps, a standard procedure to prevent untrained individuals from subjecting themselves to further risk, people were nevertheless angry. However, they saved most of their anger for the regional and city leadership.

Igor Vostrikov, a grieving parent who lost his sister, wife and three children in the fire, took his views to VKontakte, a popular Russian social media network. His message has been seen by more than 700,000 people at the time of writing and shared almost 8,000 times:

My family’s gone. My country’s ruling regime is to blame. Each bureaucrat dreams about stealing as much as Putin. Each civil servant treats people like dirt (just as their bosses do to them, and to everyone beneath them). They’ll find a scapegoat and drop the subject, but the dangers (negligence, all-out corruption, inebriation and the degradation of the population) aren’t going anywhere! Putin will of course personally punish everyone narrowly, like an order to inspect all shopping malls, but we have a lot of other places, like dilapidated homes, old hospitals: there can be a tragedy anywhere!
There’ll be a protest on 03/27 in Keremovo at 9.00 on Square of the Soviets. Come for as long as you can.
Share this message as widely as you can.

News of exactly how many perished was not released in a timely manner, and as the deceased’s relatives grew angrier, so too did the city’s population. Thousands gathered at the place and time mentioned in Vostrikov's Vkontakte post, with many lingering for ten hours.

As people began to gather, police presence increased dramatically, making for some terrible optics as riot police descended with truncheons in hand. Some who excoriated public officials were themselves in turn accused by these same officials of “self-promoting through the tragedy” —  one of them turned out to be the same Igor Vostrikov whose entire family perished in the fire.

This incredibly dismissive and outright hostile treatment of the survivors was mirrored in online activity. Meduza also reported that videos of the disaster were inundated with dislikes and comments urging people not to jump to conclusions and blame city officials.

Waves of dislikes are commonly observed with explicitly oppositional material. Some Russians are doubting the official figures of 64 dead, and some Twitter accounts have started to harass them, accusing them of lying and trying to distort facts.

Some have taken to doxxing, or publishing the contact information of people who have criticized the Keremovo city response online. Most times, these bot or sock puppet (a real user behind an account that signal boosts other such accounts) can be recognized by their wild usernames:

Pay attention to the names of those accounts [a reference to this particular account's handle, which is a long string of  alphanumeric characters and a profile picture of Sergey Lavrov, Russia's foreign minister] that are accusing the Kemerov protesters of “self-promoting on the bones [of the dead]” #TrollFactory

It can be difficult to definitely prove that there is a coordinated online campaign against these protestors, but the fact that such campaigns have existed for years is undeniable. Global Voices was one of the first Western news outlets to expose the true extent of state-sponsored online trolling in Russia. There is an anonymous channel on Telegram, a popular messaging service in Russia, allegedly run by an employee of one of the troll factories (when journalists reached out to them, the channel's owner turned down their requests, citing fears for own safety.) Named “Confessions of a Kremlinbot”, the alleged troll posted on March 26:

Yes, guys, they really are forcing us to write comments supporting the government on the Kemerovo situation.
We’re shifting blames onto various people: construction workers, the administration, security guards.
We’re offsetting the anti-government attitude: “What does Putin have to do with this? He can’t control everything!”
This is our main goal.  At the same time, we’re praising the Ministry of Emergency Situations, the firemen, witnesses who offered help, and we’re giving our condolences.
I don’t know why they need all this, but this has been the most ghoulish thing we’ve done.

Some public officials have continued dragging some of the more outspoken protestors through the mud, calling them the opposition and insisting they have involved themselves against the will of the local residents. On March 28, the official national day of mourning, Vladimir Chernov, the vice governor of the Russian coal-mining region of Kuzbass, told the state agency RIA Novosti:

We have come to a conclusion that this [the mass rally in Kemerovo on Monday, March 26] was a pointed, planned action aimed at discrediting the authorities… There were so many “heated up” youths.. People were present without fully realizing what they were doing there…

The trolls echoed this sentiment, blaming both the fire itself and subsequent protests, variously, on the agents of Ukraine, United Kingdom and Western security services, with the aim of derailing Vladimir Putin's inauguration which is happening in May.

The Ukrainian angle may have some truth to it: as it transpired, the rumors of morgues in Kemerovo overflowing with charred corpses in much larger numbers than the officially declared figure of 64 were deliberately stoked by Dmitry Volnov. The notorious Ukrainian prankster had been calling the hospitals in Kemerovo and, presenting himself as a first responder on the scene, told them to prepare enough gurneys and storage to accommodate at least 300 dead bodies.

Rumors quickly spread on Russian social networks, with numerous users passing around screenshots from Whatsapp and other popular messengers which cited the 300+ body count from a “trusted source in Kemerovo.” One such post on Yandex.Zen, a publishing platform, has already accumulated at least 113,000 views.

The tragic Kemerovo incident exposed not only the Russian officials’ numbness to popular grief and poor crisis management skills, but also the society's susceptibility to online trolling, both state-sponsored and external.