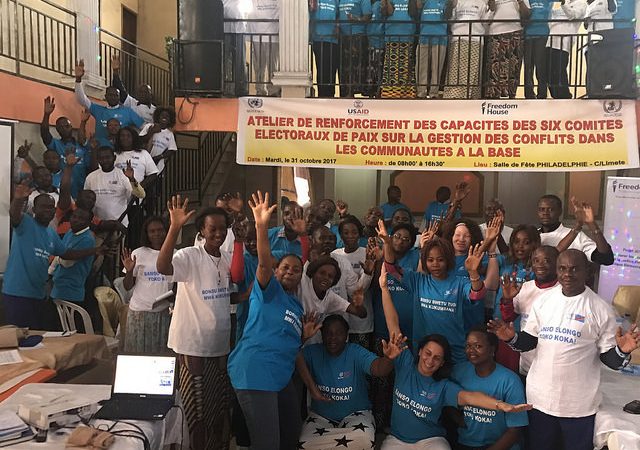 Limete, Kinshasa, the Democratic Republic of the Congo. Some members of the Electoral Peace Committees  (community and religious leaders, young people and women) CC-BY-20

This article is part of the follow-up brief of the pre-election period in the DRC. The first article from the brief can be found here.

While the situation in the Democratic Republic of the Congo (DRC) drags on, the Kabila regime is attempting to gain support in the region as best it can.  Meanwhile, the opposition is still mobilising the public to push for the organisation of elections.

Since the end of Kabila's term in 2016, there have been calls to bring an end his hold on power and to the denial of civil liberties, a situation that many say has gone on for too long. Since last December, those who oppose the regime have stepped up demonstrations which have been met with force by the police.

On 19 March, a lengthy letter landed on the desk of the Secretary-General of the United Nations Antonio Guterres, the successor to Ban Ki-moon. In it, the Catholic Lay Committee of the DRC (CLC) asked that the MONUSCO mandate be renewed to prevent any pre-electoral tension and that the United Nations, therefore, come to the aid of the DRC in organising elections.

Contradicting the government release figures, the Joint Commission of Inquiry 31 21 estimates that the demonstrations held on 31 December and 21 January reportedly led to the death of 14 protestors, 12 of whom were shot dead and 2 from tear gas inhalation. Around 40 people were reportedly arbitrarily arrested then subjected to degrading treatment during brutal interrogations. On 25 February 2018, a 35-year-old man named Rossy Mukendi Tshimanga and a second individual were both killed during the protests. On 1 February, the Joint Commission of Inquiry 31 21 was organized under the patronage of the Minister of Human Rights and included delegates representing the Ministry of Human Rights, the Ministry of Justice, the National Human Rights Commission, members of civil society, the United Nations Joint Office for Human Rights and the African Union Liaison Office.

On 11 March, this very commission urged the government to:

Lift the total ban on public and peaceful demonstrations and assemblies and also make any necessary means available to the Judiciary in order to carry out judicial inquiries and prosecute those responsible for violating and attacking human rights in connection with the public demonstrations held on 31 December 2017 and 21 January 2018.

A few days later, on 15 March the IRDH (Research Institute in Human Rights) requested that these recommendations be extended to the telecommunication companies (PDF) in the country. The cuts in internet access the day prior to these demonstrations are a particular focus of this request.

At the same time, the opposition movement is still calling for the departure of Kabila and the rapid organisation of the elections. On 12 March, several opposition leaders and activists made a three-day trip to South Africa to rally behind leading opposition politician Moïse Katumbi. The message of this candidate is clear:

…together I suggest we build an alternative Congo.

Since being voted in as presidential candidate by the G7 coalition in March 2016 (the G7 is a coalition of opposition political parties), the former Governor of the Katanga Province has been the target of repeated attacks from the regime. Sentenced to three years in prison after a real estate fraud accusation that many felt was likely controlled by the regime, Katumbi has been living in exile since May 2016. Katumbi is expected to return in June to submit his candidacy to the presidency.

This three-day assembly in South Africa was, therefore, an opportunity for the opposition to show their support for the 53-year-old opponent who has been calling for “credible and transparent” elections. For several weeks, the Kabila government has been saying it would like to set up an electronic voting system, something that the opposition criticises as being an attempt to rig the elections.

Support for the regime is dwindling

For his part, Kabila is attempting to gain support. After being put under pressure by the United Nations Security Council who condemned the demonstration crackdowns; after being abandoned by Belgium, a historic ally of the country who broke off its bilateral relations with the DRC at the end of January; and after being criticised by the European Union who requested that an International Criminal Court Inquiry be opened, the regime is attempting to win over its neighbouring countries.

The president was expected to attend the extraordinary session of the African Union on 20 March in Kigali. Despite first sending Minister of Justice Alexis Thambwe Mwamba and a delegation intended to prepare the groundwork —  this will be no easy feat.

While President of Rwanda Paul Kagamé appears to be a historic ally of Kabila, supporting him today seems to be increasingly difficult for the other African leaders. Several countries that are traditionally friends of the DRC, like Zimbabwe, Angola, South Africa and even Botswana, are breaking their solidarity with the regime. Although increasingly isolated, Kabila shows no sign of standing down. This is a worrying situation for many analysts who fear that the country will sink further into a political stalemate.