Top Manta: A Brand and a Victory in the Fight of Street Vendors of Barcelona 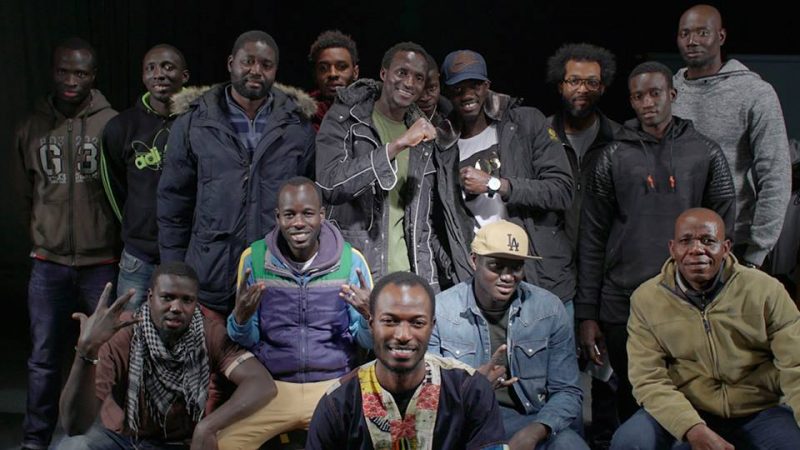 Members of the Trade Union of Street Vendors in Barcelona. Photo by: Playground Do (Used with permission)

The second week of March has been especially tragic for Spain's street vendors after the death by cardiac arrest of Mame Mbaye, of Senegalese origin, after running from the police.

This event contrasts, however, with two hopeful successes: the massive participation in the rallies in solidarity with Mbaye and the success of a crowdfunding campaign to finance a project that seeks to improve the living conditions of the collective in Barcelona: its own commercial brand, Top Manta [meaning “top blanket,” referring to the blankets on which many street vendors display their wares].

“The project which we’ve worked on so much is now here. It will let us help improve the living conditions of street vendors, continue fighting against racism, share what we know: #TOPMANTA #Crowdfunding Collaborate and share!https://t.co/RAQfYu8Sf0

The project has been launched by the Trade Union of Street Vendors in Barcelona, an association formed by migrants hailing from various countries in Africa who have found a form of subsistence in street vending because of the administrative obstacles to working under the requirements of the law.

Preceding the creation of the Union and the Top Manta brand is over a decade of fighting, self-organization, and construction of solidarity networks.

“We are creative individuals with ideas and ambition, like you.”

The idea of creating Top Manta was already announced by the collective in 2017, along with a promotional video released by online media Playground Do that has already reached more than 1 million hits. In it, Aziz Faye, spokesman of the Union and tailor by profession, explains how after eight years without employment, he discovered the dignity of this street vendor work despite police harassment, discrimination from other people, and an income that barely reaches 200 euros a month.

In the video, Faye reflects on the sudden media attention and how it contrasts with the intense invisiblization and rejection that characterize the images that are spread about them:

Not long ago we launched our own brand, Top Manta (…) suddenly, the people who would ignore or reject us, had admiration for us. The media wanted to interview us, the designers wanted to meet us (…) What had changed? Two things. First, it was discovered that we aren't just illegal immigrants, but that we're creative individuals with ideas and ambition, like you. Second, we began to speak the language of capitalism.

On its webpage, the Top Manta brand describes itself as something beyond a commercial project: an instrument of resistence and recognition, a “collective, simple, rebellious, and dignified” brand, against borders, contempt, and obscurity.

At the moment and after less than one week active, the crowdfunding campaign to finance the project's implementation has already passed its minimum goal and continues to grow. Those who collaborate can choose between different compensations, like shirts and sweaters, designed by the collective and produced in a caring, just, and sustainable manner (shipping to Europe, Latin America, and Senegal is available).

Manteros: Solidarity in the face of criminalization, racism, and invisibility

According to a report by the City Council of Barcelona, in 2016 there were 400 street vendors in the city, and more than half of them were in irregular administrative situations. The report also denies that the mafia is behind the manteros [slang for street vendors, loosely meaning “sellers in blankets” or even “people with blankets”] as the ultimate beneficiaries of their activity, a rumor widely spread on the street and the Internet.

Thanks to pressure exercised by different migrant collectives, in 2010 the depenalization of street vending was achieved, and it went on to become a minor infraction. But again in 2015, the conflictive penal code reform, carried out by the conservative government of the People's Party (PP), returned to considering street vending an offense sanctioned with punishments of between six months and two years of jail.

An important consequence of this penalization is that it helps to perpetuate the situation of the vendors’ legal vulnerability. The crime remains reflected on their records and impedes them from regularizing their administrative situation. As a consequence, getting legal work other than street vending becomes even more difficult. This is the case of many manteros, who remain “without papers” despite being in Spain for over a decade.

As the “Manifesto for the Depenalization of Top Manta” highlights:

…when a mantero is convicted for selling, this is a de facto closure of any possibility of future regularization due to the issue of criminal records. This is what we call criminalization of poverty.

Initiatives like that of Top Manta and their acceptance by the Spanish public open the door to a large number of hopes and possibilities. However, each success will be small until they no longer confront the insidious social and institutional racism that normalizes police violence, insistently denounced by the collective: “Violence carried out against us has long been accepted as natural. (…) We have many colleagues with legs and hands broken from police operations.”