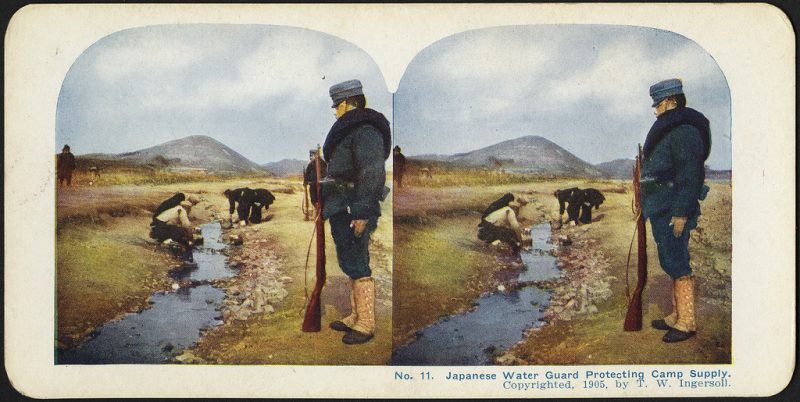 Recently, the excellent blog Public Domain Review shared just a small selection of colorised images depicting Japanese soldiers and camp life during the Russo-Japanese war of 1904-1905. The colorized stereographs provide a fascinating glimpse into a war that in many ways was a precursor to the events of the 20th century, including trench warfare that resulted in massive numbers of casualties thanks to the incorporation of advanced technologies on the battlefield.

The stereographs were captured by American photographer T.W. Ingersoll, who in 1904 traveled to Port Arthur (now Lyushunkou, a district of Dalian in northeastern China), the scene of a long and bloody battle during the Russo-Japanese war. Ingersoll, who is mostly remembered today for his stereographic scenes of the United States at the turn of the last century, managed to document daily life behind Japanese lines in a series of about one hundred images.

The stereographs, while appearing to be mostly staged, document the challenging conditions faced by soldiers forced to deal with trench warfare, including finding and protecting sources of clean water, getting enough to eat or being cared for after being injured.

Ingersoll's images have now entered the public domain, with no known copyright, and are hosted online by various institutions, including Boston Public Library, Monash University and the Skillman Library at Lafayette College. The Lafayette collection is particularly interesting because images are accompanied by explanatory captions that appear to have been written by Ingersoll himself. 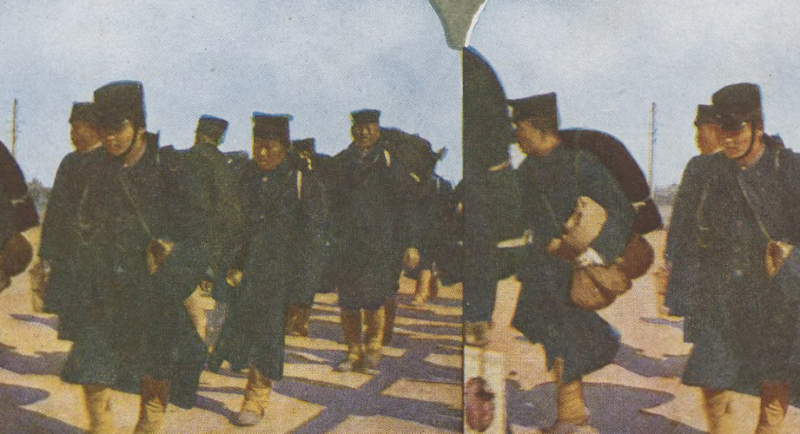 […] The futile assault on the fortress lasting from August 9th to August 26th cost 25,000 men. The transports were kept busy bringing fresh troops to Dalny. (source) 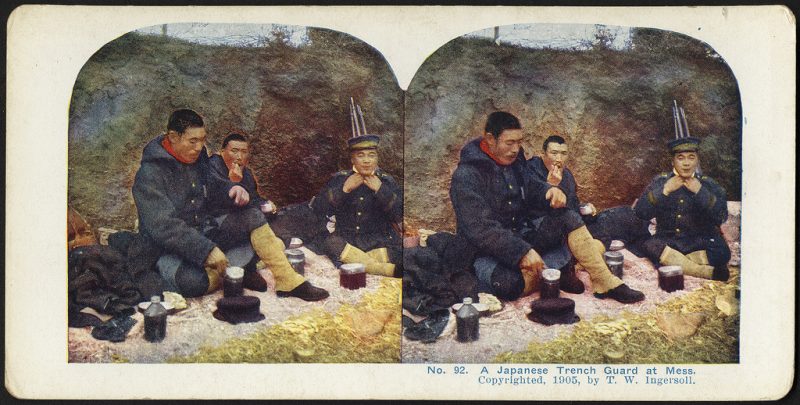 […] The men were not allowed to leave the trenches for any purpose. Here they had to watch and wait, eat, sleep and drink. The filth was sickening, the cold intense, and a bursting Russian shell might at any moment maim or kill them, while it was certain death to show a head above the protecting wall of the trench, only fifty or a hundred yards from the muzzle of a Russian sharpshooter's gun. (source) 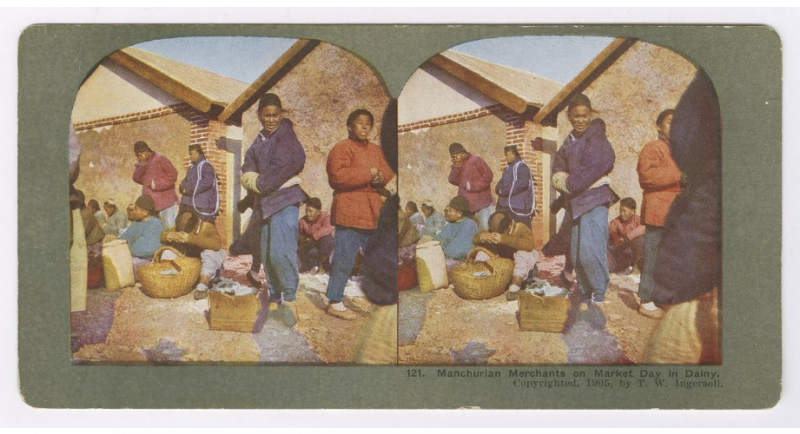 […] On May 25th Dalny was occupied, and became the base of the besieging army. Manchurian merchants flocked here in great numbers and did a thriving business. (source) 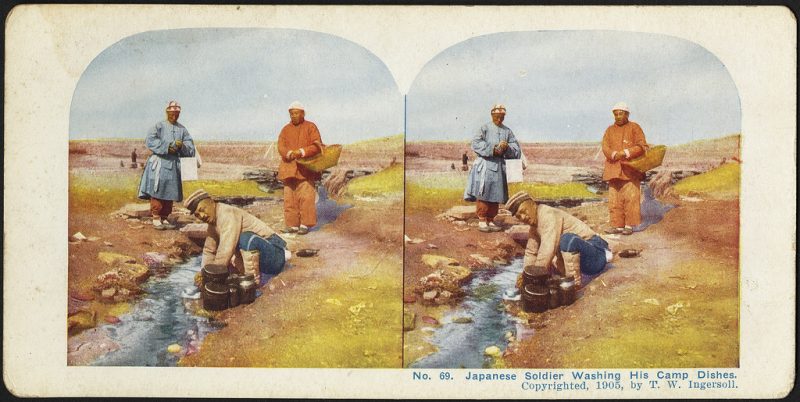 […] Every Japanese soldier carried what he called his “panican” which somewhat resembled the American workman's dinner pail. It had several compartments, and in these the soldier carried his “iron” ration of rice, dried fish, bacon, salt and sometimes a pickle or a little sweetmeat. It is the belief of European and American physicians that the marvelous power of recovering shown by the wounded Japanese soldier was due to their simple diet. (source) 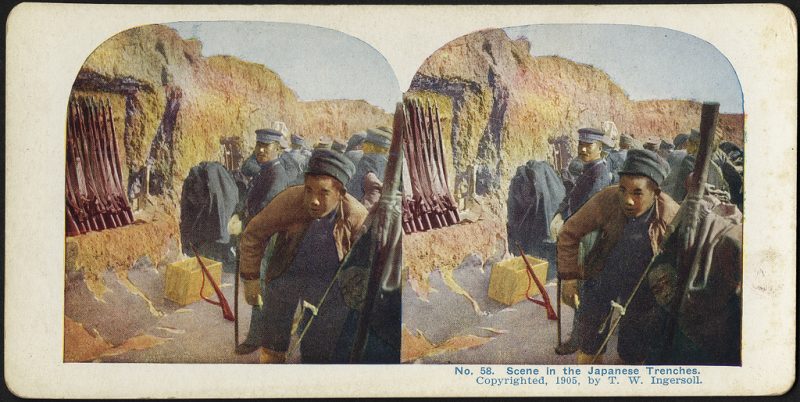 “Scene in the Japanese trenches.” (Source)

[…] The Japanese during the siege dug over eighteen miles of these [trenches], not counting the zigzag approaches from one parallel to the next. The trench shown in the picture is one before redoubt “P” that was taken in the so-called third grand assault from October 29th to November 1st, retaken at night by the Russians and again retaken by the Japanese. It was here that one regiment, ordered to storm the redoubt, refused to obey, and was promptly sent behind the firing line, while the ninth regiment was led forth and covered itself with immortal glory by taking the redoubt […] (source) 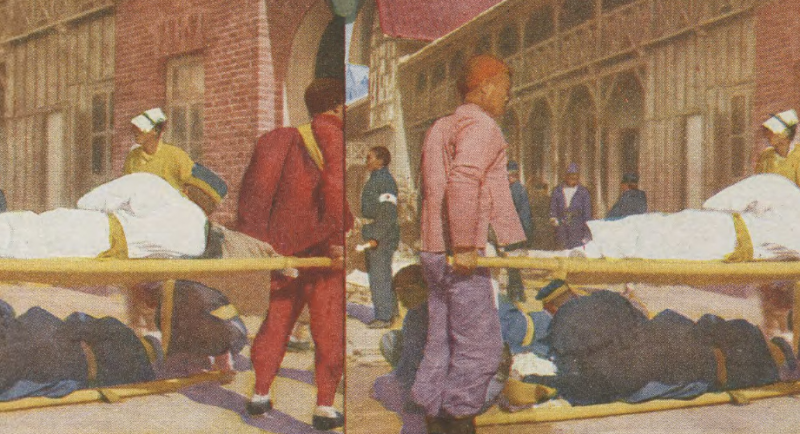 […] Many of the Russian government buildings and store houses were used for hospital purposes, to make room for the thousands upon thousands of wounded who kept pouring in. The hospitals were so full at times that new arrivals had to be deposited in the street, where they staid until a place could be provided for them. 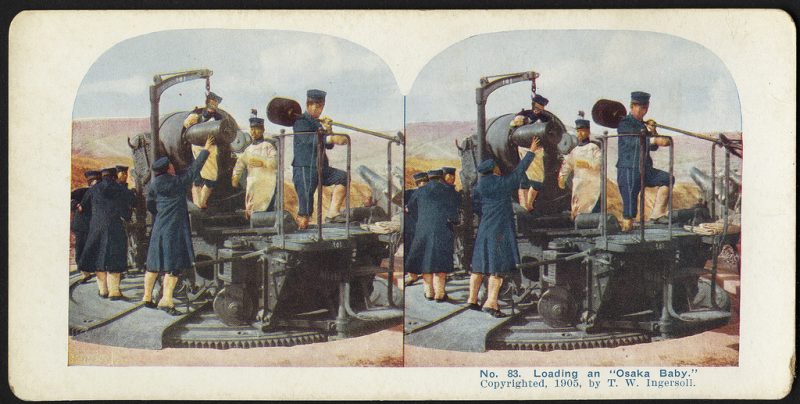 The enormous coast defense guns which the Japanese brought over from Japan to use against Port Arthur were christened “Osaka Babies” by the war correspondents. These guns were designed to defend the coast of Japan against a naval attack, and were not expected ever to be moved from the foundations on which they rested. But when it became evident that the Russians had taken the heaviest naval guns from the useless warships in Port Arthur and had mounted them on their posts, it became necessary to have weapons of equal power to combat them. (source) 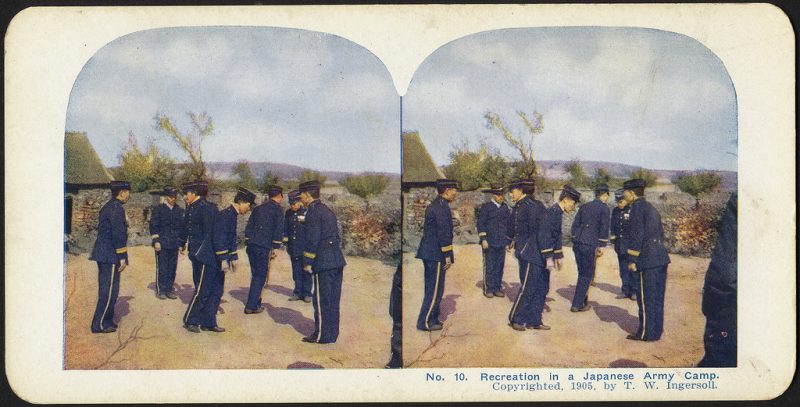 The Japanese have a wonderful way of acquiring Western ways. They investigate everything, and whatever they think will improve their way of living or working they readily accept. They even had a commission examine the advantages of Christianity over their own religions, but the commission reported that the Japanese were much gentler and more honest and moral people than any Christian nation as a whole, and that the Christian zealots and hypocrites had no counterpart in Japan. Our picture shows Japanese private soldiers dancing a quadrille under the instruction of an American war correspondent. The Osaka band is playing and these soldiers are practicing with an earnestness as if all Japan had their eyes on them. Their pastimes were all innocent sports with nothing rough about them, games like fox and geese, and occasionally the low singing of an endless victory-hymn by General Fukishima, who fought under Marshal Oyama. (source)

More images can be found at the Boston Public Library collection on Flickr, in the Monash University collection and in the Skillman Library at Lafayette College collection.