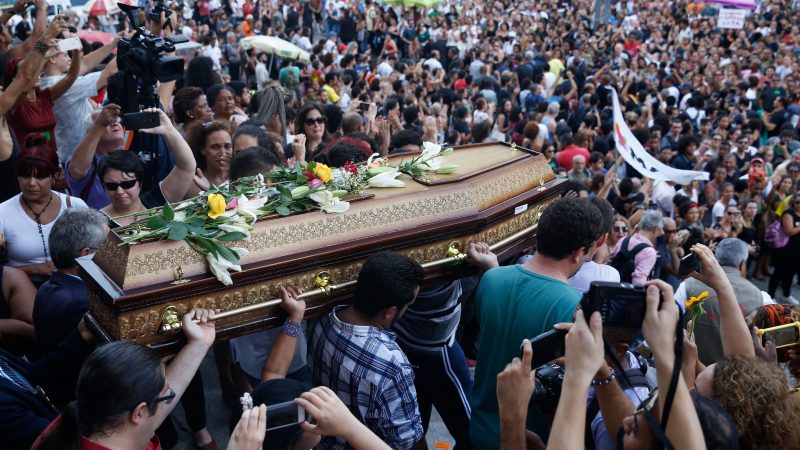 Bodies of Marielle Franco and her driver Anderson Gomes were watched over in the Chamber of Councillors in Rio de Janeiro with great public outcry. Image: Jeso Carneiro/Flickr, CC BY-NC 2.0

In the middle of the national outcry following the murder of human rights advocate and politician Marielle Franco, fake rumors about her personal life and activism began to spread through the Brazilian internet.

Marielle was elected in 2016 as Rio de Janeiro city council member with the party Socialismo e Liberdade (PSOL) with more than 46,000 votes. She was shot to death on the night of 14 March 2018 in Rio de Janeiro while she was returning from an event for black activists. She was accompanied by her driver Anderson Pedro Gomes, who was also killed; and her press officer Fernanda Chaves, who survived.

While thousands took to the streets in various Brazilian cities to protest Marielle’s murder, which is being investigated as an assassination, others spread rumors about her online.

On 16 March, the magistrate of a Rio de Janeiro appeals court, Marília de Castro Neves, posted a Facebook comment accusing Marielle of being linked to the Comando Vermelho (red command), the largest criminal faction in Rio de Janeiro, and that she was “an ordinary corpse like any other”.

Tweet image: The question is that this Marielle was not only an “activist”; she was connected to criminals! She was elected by the Comando Vermelho and broke “commitments” made with her supporters. She, more than anybody “away from the favela”, knows how the debts are charged by the groups that she dealt with. Even we know that. The truth is that we will never know for certain what determined the death of the councillor, but we are sure that her behaviour, shaped by her political engagement, was determinative in her tragic end. Anything else is whining by the left trying to add value to a corpse as ordinary as any other.

Tweet text: The magistrate told Folha [newspaper] that she did not know Marielle and had not even heard of her before, from there she comes to the public and makes this accusation against Marielle. In any other country the magistrate would at least lose her job

Before she deleted the comment, however, her statement was taken up by the mainstream press, which unleashed a wave of disinformation that had massive reach.

Folha de São Paulo, Brazil’s largest daily newspaper, reported the magistrate’s comment dealing with the defamation in the text but not in the title, leaving it ambiguous: it could be understood as if the endorsement of the magistrate confirmed the rumours.

Following Folha's story, the right-wing page Ceticismo Político (political skepticism) published a piece entitled “Magistrate breaks the PSOL narrative and says the Marielle was involved with criminals”. The Movimento Brasil Livre, also right-wing and with 2.5 million Facebook followers, shared the piece, contributing to the spread of the false accusation.

A study by São Paulo University points to the piece at Ceticismo Político, a small website with only 25,000 followers on Facebook, as a crucial node in the fabric of fake news that followed Marielle's death. The piece was shared 361,000 times on Facebook and made more than a million impressions on Twitter over the course of three days.

Also on 16 March, Alberto Fraga, federal deputy for the Democratas and member of the bullet benches – as the parliamentary group supporting unrestricted access to firearms for civilians is known – tweeted similar false accusations. He deleted the tweet after his comment went viral.

Tweet image: Meet the new myth of the left, Marielle Franco. Pregnant at 16, ex-wife of Marcinho VP, marijuana user, rival faction defender and elected by the Comando Vermelho, she recently exonerated 6 members, but who killed her, it was the Military Police.

Tweet text: Alberto Fraga deleted it, but I kept it.

Various initiatives appeared online to combat the fake news machine. The PSOL, the party to which Marielle was affiliated, created a website specifically to refute these and other lies. 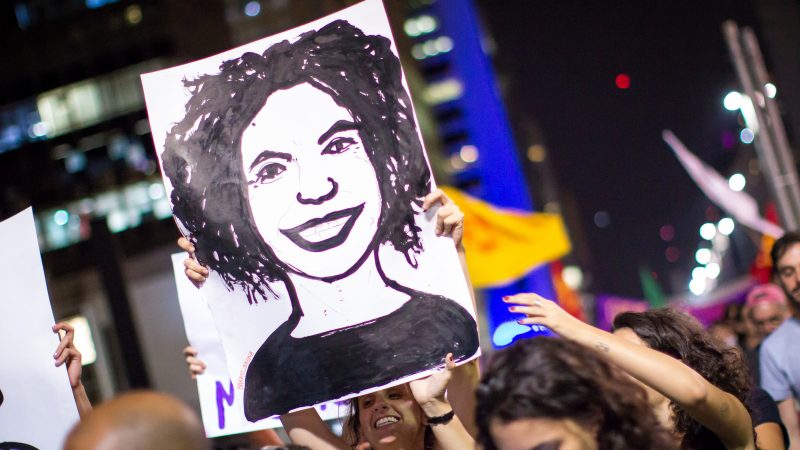 The false accusations against Marielle reflect a distorted conception of human rights, a cause for which she campaigned. For a significant part of Brazil’s population, the defence of human rights contributes to the country’s soaring crime rates. There is wide perception that the solution is in harsher punishments.

The contradiction shows that support for harsher sentences goes alongside the observation that the apparatus implementing them is violent.

This may be compared with another survey made by the Centre of Security and Citizenship Studies (Cesec) of the Cândido Mendes University, which showed that in Rio de Janeiro, the phrase “a good criminal is a dead criminal” was rejected more than in Datafolha’s poll, which examined attitudes across the country.

However, the survey of Rio de Janeiro residents still showed that 73% of those interviewed think that the defence of human rights is incompatible with controlling crime and that 56% think that those who defend human rights are defending criminals.

Even if the rates of approval of the phrase “a good criminal is a dead criminal” vary, the understanding of human rights in Brazil is confused. In an interview with Nexo, the researcher Julita Lemgruber, who conducted the study in Rio de Janeiro, explained:

There is a clear confusion over the meaning of the term “human rights”, as other parts of the survey clearly show that those interviewed reject what is, in practice, against human rights. We, who work on these questions, have to take this [the rejection at 73%] as a warning, a sign that it is necessary to work on the articulation of “human rights” in Brazil, so as to divorce it definitively from the idea that it is a question of defending privileges for criminals.