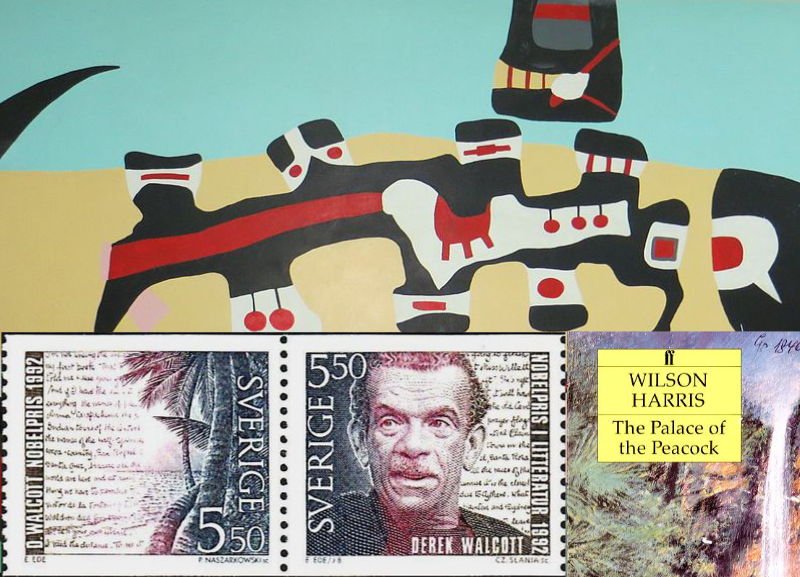 Sparks from the central fire—I was lucky to be near enough to feel the blaze these men ignited in the world.

The St. Lucian poet Derek Walcott, or rather his poetry, entered my life when he was 20 and I was 17. I had read poems in the English Classics on my parents’ bookshelves earlier in my life. And a great teacher, John Hodge at Queen's Royal College in Trinidad, had introduced me—outside the set curriculum—to the poetry of Gerard Manley Hopkins, which had flared like a torch in my mind. But this was the first time I knew immediately and deep down that great poetry could be written by one of my own West Indians. Somehow (I think it was from the Public Library but it may also have been from the hands of John Hodge) I had come upon the very slim booklet “Twenty-Five Poems”, Walcott's first book. I remember taking it with me to the savannah grounds of the Imperial College of Tropical Agriculture (now the UWI St. Augustine campus) where I used to go to run and train for tennis tournaments. And after a run I sat down on the stone steps leading into the main College building and read this small book. Its poems were a revelation which has lasted throughout my life.

Since then I have read all of Walcott's books as they have come out. The last, “White Egrets”, contains poems as magnificent as any Derek—who died just over a year ago—ever wrote.

I cannot recall the titles of all the books; they flow into a blur of beauty, but they have been incomparably important in my life. I remember “A Letter from Brooklyn” from the early book “In A Green Night”, a poem which made me think at the time that a perfect piece of writing was possible. I think of the book-length poem “Another Life”, which I believe is the single greatest poetic creation of the last century—and Professor Eddie Baugh’s annotated edition of that book the greatest work of scholarship in West Indian literary studies. And all the other Walcott books down through the years. So much to praise and cherish forever as long as forever ever lasts.

Over the years I met Derek many times, the last occasion being at Carifesta in 2009 when he and the then president of Guyana, Bharrat Jagdeo, had a memorable exchange of views about the value and place of writers and artists in a nation. I wish my friendship with Derek had been closer and our conversations longer. Perhaps my reverence for his work was too intense to permit the closer friendship which thrives on accepting frailties as much as on appreciating genius. But always there has been the poetry and myself forever caught in the web of its light and its beauty.

Soon after I arrived in Guyana (then British Guiana) in 1955, I met Wilson Harris. The poet Arthur Seymour had introduced me to his writing by giving me a copy of Wilson’s strange and powerful poem “Eternity to Season”. Wilson was a  professional surveyor and spent much of his time in Guyana's forests and savannahs, whose great spirits invaded his imagination forever. When he was in town I used to meet him at Martin Carter’s home.

Wilson had a smile which crinkled his face until his eyes nearly closed, and a very distinctive, slow, quiet tone of voice. But when he was inspired by the ideas teaming in his mind his low voice would rise and rise, as he read out loud passages he had written to express his thoughts, and his utterances would become a sort of chant and soon he would be raising his hand to strike Martin or me on the arm or knee quite hard, then harder to punctuate and emphasise what was tumbling out of his mind. “You see!” he would say. “You see! You see!” I might not have always seen. But I felt. Some passages he read were incomprehensible to me. Some I remember being as beautiful and clear yet shadowy as forest rivers. At the time he may have been composing that extraordinary, visionary, wholly original work later published in England as “Palace of the Peacock” – so I like to think those passages he beat upon my knee may have been the first announcements of his genius!

After Wilson went to London I did not see much of him. But I sent him copies of my own books of poetry written over the years and he always replied with a kind and thoughtful handwritten note. And whenever I visited him in his London home he and his beloved wife Margaret were the very soul of courtesy and kindness. He would explain to me the latest of the strange paths his thinking had taken towards truth and eternity, but I could seldom follow him very far down those mystic paths. In one meeting he said that the findings of the quantum physicists were beginning to enter into his thinking. But I was always left at the end of our times together with the sense that my own imagination was being stressed and stretched to the very edge of joining him beyond the ordinary world we live in, to find the age-old spirit and greater power that guides our immortal selves, and shapes our universal destiny.

I once went fishing in the Lama Conservancy with Aubrey Williams. I caught nothing, but Aubrey caught a couple of good-sized lukanani. Their colours shone as they lay dying at the bottom of the boat, but by the time we got back to the Lama guesthouse, the beautiful life-colours of the lukanani had faded in death. Aubrey made me a comparison. The paintings he composed in his imagination gleamed with the colours of heaven, but by the time he got them on to the canvas they had grown dull and he was woebegone. He tried mightily to preserve the originals that hid in his imagination but mostly he failed. Composition was a sort of death. This seemed astonishing to me. To me and others, his great series of paintings blaze with the undying fire of genius.

I found Aubrey the most overwhelming physical presence I ever encountered. His joy and laughter and praise of all the earth was an elemental force which lifted everyone around him. He told me when he went into the deep forest he and the friends with him would seek out a giant forest tree and embrace it with their joined arms until they sensed its spirit enter them like light or a thunder in the heart. This was not a game. This was how he worshipped and prepared his mind for work. He summoned Gods to preside. Whenever I met Aubrey and talked with him, and when he gave me his huge hug before leaving my home, I felt afterwards that it was not good enough to live an ordinary life.

Ian McDonald is a poet, writer and editor who has described himself as “Antiguan by ancestry, Trinidadian by birth, Guyanese by adoption, and West Indian by conviction.” His novel “The Hummingbird Tree” is considered a classic of Caribbean literature.