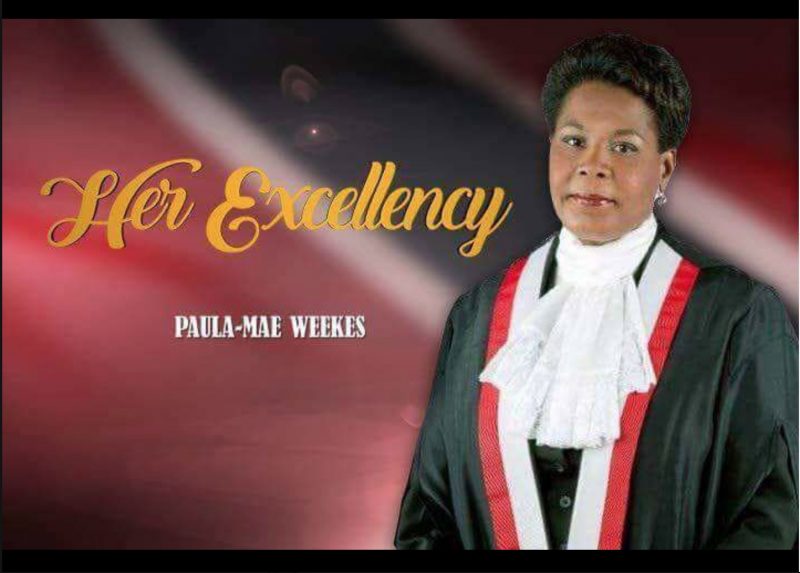 On March 19, 2018, Trinidad and Tobago swore in its sixth president, Paula-Mae Weekes, making history as the island's first female head of state since becoming a republic in 1976.

An attorney by profession, Weekes worked in the office of the Director of Public Prosecutions for more than a decade before going into private practice. She was appointed first to the bench and thereafter to the Court of Appeal where she served until her retirement in 2016.

Weekes’ appointment attracted major attention on social media and many netizens consider her to be an excellent choice for the position. Maxine Williams, a Trinidadian who is the Head of Diversity at Facebook posted:

Congratulations to President Paula-Mae Weekes, the first woman to hold the office in Trinidad and Tobago. The thing about ‘firsts’ is that they are bitter sweet. It finally feels like the narrow vision of the past has broadened to include more people on their merits, and yet we are reminded in this moment of how long it took and what a heavy burden of expectations the first one to push through carries. Wishing her and all the others who will walk through the now-open door, well in their humble service.

Her Excellency Paula Mae Weekes is the change this nation needs I believe.

Taking office after a controversial predecessor

Anthony Carmona, Weekes’ predecessor, was a controversial figure. At his inauguration in 2013, he made a cryptic speech about his powers under the Westminster system of governance: “Powers you think I have… I do not. Powers you think I do not have… I do,” he said.

Those words came back to haunt him.

Allegations of impropriety in public office plagued Carmona following the release of the 2015 Auditor General's Report on the Public Accounts, made public on April 29, 2016. The report noted financial irregularities which came to the attention of civil society.

Rhoda Bharath, a university lecturer, used social media to challenge the former president regarding his acceptance of a $28,000 Trinidad and Tobago Dollar TTD (just over $4,000 USD) monthly housing allowance over a two-year period while living in state-funding housing, contrary to the rules.

A senior attorney in the United Kingdom who examined Bharath's documents concluded: “The case is finely balanced but I believe that there are at the moment reasonable grounds to suspect that the offence of misconduct in public office has been committed.”

Just over a year ago, the Trinidad and Tobago Police Service announced that its anti-corruption unit would launch an investigation into the presidential housing allowance, but no further updates on the status of the investigation have been issued.

Today is a historic day as H. E. Justice Madam Paula Mae Weekes becomes the first female President of the Republic of Trinidad and Tobago.

While I have bought ‘Cyat in Bag’ [cat in bag] before with many a political figure in the Republic, Her Excellency's career, deportment and media interviews thus far has given me hope that she will be a great office holder. Hopefully her first act in office would be reclaim some dignity to the office by allowing a full investigation into the actions of her predecessor on the many allegations levied towards him.

One of many citizens who attended Weekes’ inauguration, Rhoda Bharath branded her posts with the hashtag #PaulaMaeDay, which was quick to catch on. She later quipped:

[…] It is #PaulaMaeDay
May she never abuse her #StrenkAndPowaz.
#Overdue

Having been burned by the Carmona experience, some netizens were not so convinced. On Facebook, Nyssa Pear explained:

I’m not listening to or watching the swearing in. I’m still traumatized by the last speech that bamboozled an entire nation and I still have questions like WHERE DE MC MONEY DAWG??! I do, however, wish Justice Paula Mae Weekes the absolute best and hope she does right by all of us.

Weekes’ swearing-in ceremony — and her maiden presidential address, in particular — was well subscribed. Weekes’ inaugural speech identified her role as “humble, first servant, with a mandate to render service with enthusiasm”.

We have but two choices […] lament, blame, criticise and allow a miasma of despair to overwhelm us, or […] consciously and intentionally choose the alternative […] mobilise forces and resources to step out boldly, to make Trinidad and Tobago a better place for us and for our children.

Weekes expressed interest in meaningful meetings and encouraged citizens to approach her “armed with your ideas, your feasible projects to improve our quality of life”, saying,”Nothing will catch my attention faster than a man or woman with a plan.”

Is it too early for #FixItMadamPresident?

In light of the theme of empowerment President Weeke's inaugural address at her swearing in, we can be empowered by her ordering a comprehensive audit into expenditure at the Office of the President from March 15th 2013 to March 18th 2018 and making the audit public.

I didn't find Her Excellency's address very inspiring, to be honest. But I did find it very down to earth, and clear-sighted about issues we face as a country. And perhaps we need that right now, more than high flown rhetoric.

(Also, she didn't claim any powers she mightn't have. And that's always good!)

Tanya Carr was pleased that the new president “threw some serious shade” in her inaugural address, adding:

And she very clearly stated, in response to the overblown expectations of many, that it was not her responsibility alone to fix things….and I am sooo glad she did, she is not a superhero sent to save TT from itself, we need to lose that tired rescue narrative ….

Just warned a male friend of mine to avoid direct eye contact with Hilarians today as they be on fyah [fire] living their best lives right now …. I am so here for this ….

We send our heartiest congratulations to the President-elect and to our Alma Mater, Bishop Anstey High School….non sine pulvere palmam. With pride and hope for our nation…

Hilarian or not, the fact that Weekes is the nation's first female president made her swearing in a landmark event for many.

As a proud people, we congratulate Paula-Mae Weekes as today we join 27 countries globally with current female Heads of State/Government; thereby contributing to the increasing number of women world leaders. […]

Women have made great strides in creating political space and fighting for equal opportunity, but one thing continues to worry me as we celebrate this auspicious day, and that is the continued prevalence of violence against women. […] This has to stop. I encourage my male counterparts to stand in support of women and continue to be good fathers, brothers, husbands and sons to the women of our land.

Congratulations to Paula-Mae Weekes on her appointment. Her sterling career in the Judiciary will have prepared her well for this major role at a difficult time in our history. I know that she will make us proud.

Nylah Ali had a different view:

If a man was being sworn in, no one would comment that this is the ‘sixth male President’.

I also don't want to hear or read […] about women's rights and issues. That is for a separate forum. Let's stick to the occasion and the person being sworn into office.

The majority of Trinbagonians seem to agree that President Weekes is qualified and capable. Now they look forward to seeing how she delivers.