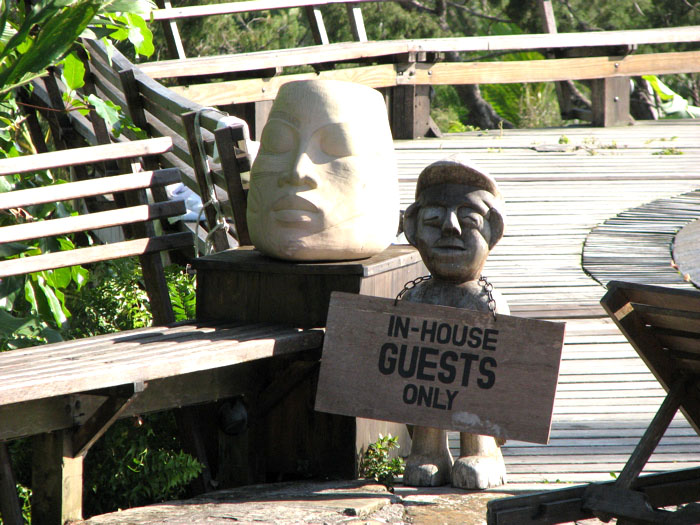 A Gene Pearson sculpture near the hilltop pool at Strawberry Hill in the Jamaican Blue Mountains, March 7, 2009. Photo by Nicholas Laughlin, CC BY-NC-SA 2.0

A celebrity in the Jamaican art world, fans admired and regarded Pearson as one of the best artists in Jamaica. His works appeared in public places, galleries, on tourism posters and in Jamaican homes. Famous collectors of his work include musician Stevie Wonder, former United States president Bill Clinton, author Maya Angelou, and former South African president Nelson Mandela.

Pearson received numerous awards, including the Musgrave Medal (Silver) in 2010. He was also honoured in the National Gallery of Jamaica's 2010 Biennial and received a National Honour Order of Distinction in 2001 which was then upgraded to ‘Commander Class’ in 2015.

Born in rural Wood Hall, St. Catherine Parish in southeast Jamaica in 1946, he was a graduate of the Edna Manley College for the Visual and Performing Arts (then the Jamaica School of Art), where he later taught. Legendary teachers include master potter Cecil Baugh. Working primarily in ceramics, Pearson also created bronze pieces and was a master of the ancient Raku pottery technique.

Pearson's work resonated with Jamaicans from many walks of life. National Gallery of Jamaica noted in 2010:

Pearson’s ceramic and bronze sculptural work celebrates black beauty and dignity, which accounts for the popularity of his work in Jamaica and the African Diaspora cultural sphere. His style and subject matter are inspired by the arts of ancient Nubia, Benin and Rastafarian culture and emerged in dialogue with the visual language of contemporaries, such as Christopher Gonzalez. His style is however firmly distinguished from the latter’s moody expressionism by the silent, introverted monumentality of his sculptural and ceramic forms and is arguably among the most distinctive and recognizable of the artists of his generation.

Jamaican ceramic artist Gene Pearson, who died yesterday, once said: “I never stop. I just keep working. I continue to grow like the trees in the mountain.” In memory of the man and his monumental contribution to Jamaican art, here are 10 facts about him: https://t.co/YkG5WlJ2wb pic.twitter.com/KnINLeqPM2

Pearson's death was officially recognised by the Jamaican government. The Jamaican Senate paid tribute to him the day after his death, and Foreign Affairs Minister, Senator Kamina Johnson Smith, shared:

In 2016 I was honoured to shake the talented hands of #GenePearson.The Senate paid tribute to him this morning.#RIP pic.twitter.com/zE0bRHMHLd

Art lovers, collectors, and artists honoured Pearson with photographs of their favorite sculptures.

The artist died suddenly on March 15, just two days after the passing of his ex-wife Jacquelyne Hussey-Pearson, who had been struggling with cancer for several years. They have a fourteen-year-old son. Human rights advocate Carol Narcisse shared:

Saluting Gene and Jacqueline Pearson. They have left so much to be cherished, protected and cared for. we must not fail them.

Novelist of note in the Jamaican diaspora

Garfield Ellis, affectionately known as “Jiggs”, was one of several distinguished writers from the diaspora who made regular visits to his native Jamaica.

On Ellis's homepage, he spoke to the challenges of making it as a writer in Jamaica:

It is a very difficult thing to want to be a writer in Jamaica; especially if you want to be great. It seems pretentious and ambitiously ambitious, ridiculously vain, a head-in the-air, pie-in-the-sky type of folly. Writing is not for poor people to do. It is for those of a lighter cast, white people, rich people, foreign people, but not people like me- ordinary people- for whom just growing up is a struggle. Besides, it is not something that you share with your friends. I knew no writers. There was no one to discuss it with. There was no precedent in my community, not for writing, not for any kind of success. Those who succeed, leave.

Shocked to hear that Garfield Ellis, that warm man and wonderful writer, has died… Finding it very hard to believe! RIP Garfield. We will miss you… Condolences to your loved ones.

Ellis grew up in an impoverished neighbourhood near Spanish Town (St. Catherine Parish) as the oldest of nine children. He studied engineering and worked at the Caribbean Maritime Institute in Kingston.

When one of his short stories won a writing prize from the University of Miami, he resigned from his job in Jamaica and enrolled in its Masters of Fine Arts programme as a James Michener Fellow. He was a three-time winner of the Una Marson Award for Adult Literature (1997, 2000, 2017) and the Canute A. Brodhurst Prize for Short Fiction (2000, 2005). He also won the 1990 Heinemann/Lifestyle Short Story Competition. Angels’ Share, Ellis’ last novel (2016), was launched in Toronto, Canada.

He was deeply respected by the Jamaican literary community, who reacted with shock. The 2015 Man Booker Prize winner Marlon James simply stated:

Garfield Ellis always struck me as the strangest sort of Jamaican writer. Never before had I met a writer so full of the books which he would write (and which he did write), so dedicated to not just writing but writing with ambition, so thoughtful about matters of craft, and yet so thoroughly lacking in bad-mind. There was never even the hint of it. That combination of ambition with lack of competitiveness distinguished him from us all. You could never call a writer’s name in his presence and have him turn up his nose, or look sideways or discretely sip his drink and change the conversation as I have done so many times. I think his was simply the eagerness to be in a community of writers and readers, and he would never do anything to hurt that community which he so cherished. His smile came quickly, naturally, and he spoke about all of us with such generosity. The success of other writers seemed to please him. I think he must have always seen the bigger picture: this was Jamaican Literature; Caribbean Literature – it was a broad landscape whose distance he couldn't walk by himself. He knew himself, as we all should know ourselves, as a small cog in a mighty wheel. His loss is the loss of one of Jamaica’s better novelists, but also, it is the loss of one of our greatest cheerleaders. I am going to miss him. Rest in Power my yute [youth].

We're saddened to learn of the passing of Jamaican author @Giggsellis, who has died today. A past Bocas author, his presence will be deeply missed in both the Caribbean and international literary community. pic.twitter.com/7SlB64rbHB

When I read Garfield Ellis’ Such as I Have I cried and cried. I went out and bought a couple copies for friends I thought must read it, as I refused to share mine. This is the talent we lost today. My heart weeps. Walk good bredrin #RIP pic.twitter.com/ciKIvEv8xF

Writer Geoffrey Philp was not prepared for Ellis’ death:

I was not/ am not prepared for this. Garfield Ellis is—I refuse to use the past tense—not yet anyway-a man who always made me and anyone who was around him, feel life—the life that poured out of him , his laughter—always his laughter—and the remarkable characters he created—and to rejoice in the moment for this bright brilliant existence that we share that is often too brief. God’s speed, my brother. I feel blessed to know you and to celebrate your life and career and the times we spent together.

After winning the Lignum Vitae Award for young adult literature in November 2017, Ellis expressed concern that young Jamaicans were not reading enough:

There don't seem to be a lot of young people who are reading. I don't think enough is being done to generate interest in reading. When I was in Jamaica [in 2016], I looked in the bookstores, and there are no books, and the libraries are empty. People are not writing young adult fiction. I don't think there are a lot of young people writing as a general rule in Jamaica.

Jamaica has lost two brilliant creatives in a matter of hours. Thank you #GenePearson and #GarfieldEllis ??

A university lecturer and blogger summed up her feelings about the passing of both Pearson and Ellis in a tweet, with a stirring piece of poetry:

Jamaica, we mourn the passing of sculptor Gene Pearson and writer Garfield Ellis. But we will celebrate them always. #RIP #themaskofgrief pic.twitter.com/mcI9ROFc71

Both Pearson and Ellis were ground-breakers.

Pearson made ceramic art accessible, popular and spiritually appealing. Ellis broke away from his humble background to bring Jamaican families and relationships to life in his writing.

Their deaths will leave a void in Jamaica's creative landscape.