When Indigenous Girls are Raped and Assaulted in Bangladesh, a Queen Rises Up in Solidarity 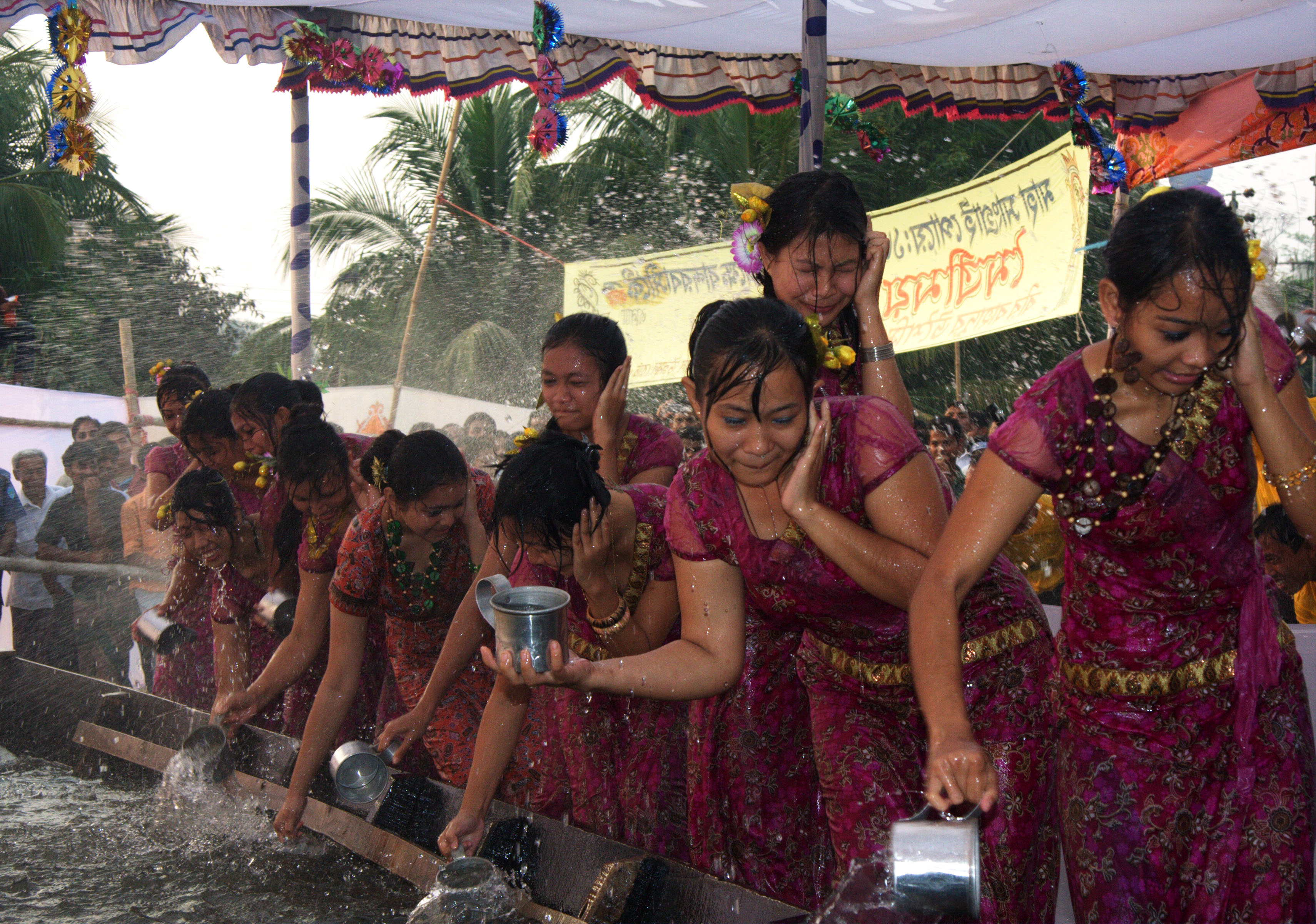 On January 22, 2018, two sisters aged 19 and 14 from the indigenous Marma community were allegedly raped by members of security forces in the Rangamati district within the Chittagong Hill Tracts (CHT) region in southeast Bangladesh.

During the raid, two stray members of the team entered a Marma home early in the morning and allegedly raped a 19-year-old girl in front of her 14-year-old sister, who was also sexually assaulted, while their parents and the little brother remained detained.

The sisters were admitted to the Rangamati Sadar Hospital on January 23 for treatment and kept under close watch by security forces for several weeks while waiting for a medical report as proof of the rape and sexual assault.

Queen Yan Yan of the Chakma Circle, the Royal House of Chakmas (the largest ethnic people in Rangamati) began visiting the girls to help build their case in partnership with local human rights activists.

Security officials first denied the allegations. Later, they said that a particular Ansar member has been withdrawn [from service] and an investigation is ongoing.

A queen steps up to defend the two Marma sisters

Queen Yan Yan described in an interview with the Daily Star that the sisters’ parents wanted to take them home but were waiting for the medical reports. According to the Queen's account, the girls did not want to leave, fearing their parents were being coerced to keep silent. They remained in the hospital for the following weeks.

Following a writ petition by their father, a High Court bench on February 13 ordered the authorities to hand over the girls to their father. However, a custody battle ensued as human rights groups filed a stay order claiming that the girls refused to leave with their father, demanding instead to leave under the custody of Chakma Circle Chief Raja Debashish Roy, fearing for their safety.

On February 15, the sisters were forcibly removed from the hospital and handed over to her parents against their wishes.

The Bangladesh Indigenous Women's Network reported on the chaotic situation that ensued, including an alleged assault on Queen Yan Yan herself by state forces:

Acting on a directive issued from the High Court on 15 February 2018 to take the Bilaichari victims of rape and sexual assault to the custody of their parents under police protection, police took the parents to Rangamati General Hospital. Considering their security, the victims refused to go along with their parents again. The parents even slapped the victims to make them agree. Despite that, they kept begging to go under the custody of the Chakma Circle. During that time Chakma Rani Yan Yan arrived in the hospital and the victims embraced her. The Rangamati General Hospital compound, all of a sudden, was crammed with members of the police and special branch, and plainclothes security men.

Meanwhile, the victim sisters were handed over to their parents under police custody and taken to an unknown place. Their whereabouts have not been revealed yet.

If you want to finish them don't do it inside the hospital, do it outside.

On February 19, in a public speech during a rally comprised of traditional leaders and common people at Rajbari (King's House) premises, Queen Yan Yan spoke about the events surrounding the detention and abduction of the two Marma sisters:

She declared that despite suffering threats and physical abuse, she refuses to back down from demanding justice for the Marma sisters. Queen Yan Yan also assured that she will continue to fight for the rights of the indigenous people to free them from oppression.

The Chittagong Hill Tracts (CHT) is an extensive hilly area covered with forests bordering India and Myanmar and is home to several tribal populations include the Chakma, Marma, Tripura, Bom, Chak, Mro, Murung, Pankho, and Khumi.

These indigenous people differ markedly from the Bengali majority of Bangladesh with respect to language, culture, physical appearance, and religion. 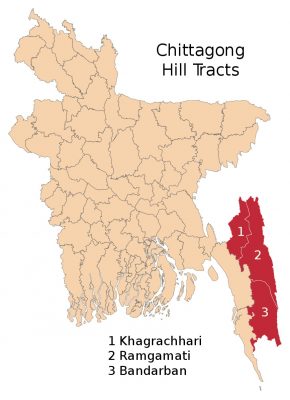 The three Districts of the Chittagong Hill Tracts. Image via Wikimedia Commons. CC – BY 4.0

During the 1970s and 80s, the government of Bangladesh started to populate the area with Bengali people from the rest of the country, displacing local inhabitants who had lived there for centuries and threatening their way of life.

The local tribes resisted by forming resistance groups, the most notable of them being Shanti Bahini, which started attacking the Bangladesh army and carrying out civilian kidnappings and extortion. They took up arms to fight the Bengali presence in tribal areas and successive Bangladeshi governments turned the region into a militarised zone to fight insurgencies.

Numerous conflicts between the indigenous people and the Bengali settlers over the decades have resulted in several mass killings of indigenous people. Many allegations of human rights abuses surfaced over the decades against the Shanti Bahini who attacked settlers. Security forces have allegedly taken extrajudicial measures against local ethnic people, deeming them insurgents and acting with impunity.

The cases point to growing culture of impunity within the security services as it appears reluctant to take on their own.The blatant disregard for human rights by the Bangladeshi armed forces in CHT is evil.

A 1997 Peace Accord was signed between the Bangladesh government and the Parbatya Chattagram Jana Samhati Samiti (Party of the Tribal Peoples), which opposition parties, as well as a fraction of tribal rebel groups, had opposed. Yet, tensions persist.

Oh yeah lol on the topic of discrimination against indigenous people and women, a young indigenous girl was raped a while back. This is the sort of news I had to hear growing up. I always felt unsafe even in my own village because of the sort of stuff I saw whenever I followed my mother to wherever she went for work.

Kapaeeng Foundation is working for human rights of indigenous people in the CHT since 2004. In a research report, they laid down statistics of violence against indigenous women in the past few years.

Abuse cases are often suppressed with intimidation or by offering victims’ families meager settlements. In the case of the two Marma sisters, Hritwik-Chakma reports that security forces attempted to settle with the family for only 50 Bangladesh Taka, the equivalent of .62 cents in USD.

In the early morning, at around 3:30 AM two stray members of security forces came to the house and detained the father, mother and the little brother at gunpoint. They raped the elder sister and tried to rape the younger one. ..Hearing their screams, their neighbors and the rest of the security forces members came running.

They tried to settle this quietly, offering the victims BDT 50 each!

Sexual assault and rape are stigmatized in Bangladesh. The superintendent of police in Rangamati allegedly shared the photos of the two Marma rape and sexual assault victims and reportedly took down those images only after criticism on social media.

Chittagong Hill Tracts International Network For Human Rights has posted an open letter to the Prime Minister of Bangladesh demanding justice for the abuse and abduction of the two Marma sisters:

You are requested to ensure the followings:
1. Immediate punishment for Bangladesh military servicemen involved in raping two indigenous girls of Bilaichari Upazilla of Rangamati Hill District on 22 January 2018;
2. Justice for the victims; and
3. Uphold the people's trust and respect in Bangladesh and its constitution.

While an online petition has also been raised, Bangladeshi netizens allege that the mainstream media is not properly reporting adequately about the case.

The God lives in a distant media village. The cries of the mountain do not reach him.

Raped, terrorized, kidnapped by agencies that are supposed to enforce the law while the media watches silently

Blogger Paichimong Marma blames the silence on a media blackout allegedly sponsored by the armed forces in an interview with the Deutsche Welle:

Each year many incidents of land grab-arson-abuse by settlers and there are numerous armed forces raids, ethnic clashes happen. These do not reach the mainstream media due to military sensorship and media blackout in this region. When any case turns big then the mainstream media pubishes the news in small scale. You can't know enough from that small article – only something has happened. But who made it happen, why, the details, the history and context, hidden actors and what is going to happen next — you won't ever know.

Widespread protests were triggered when news of the sisters’ rape and sexual assault went viral on social media, with Queen Yan Yan first breaking the news. Protestors demanded the arrest of the perpetrators and the harshest punishment after a proper trial:

Protest at National Press Club against #rape of #Marma sisters https://t.co/K3dWJTDesf In the month of February, when we celebrate mother #language day, rights of citizens who speak other languages, are brutally suppressed #Bangladesh #CHT pic.twitter.com/Vce574Tn0c

As per the latest reports, the two sisters and their parents were kept at the house of Abhilash Tanchangya, a political leader, at Patharghata area in Rangamati town under tight police security. Nobody is allowed to meet them.

According to Al Jazeera, the parents have been threatened by members of the armed forces to abide by their commands and the entire family faces ‘grave danger’.

On February 23, the Supreme Court of Bangladesh asked the High Court to hear and settle the case of the custody of the Marma sisters within six weeks. As of now, an official case has not yet been filed.