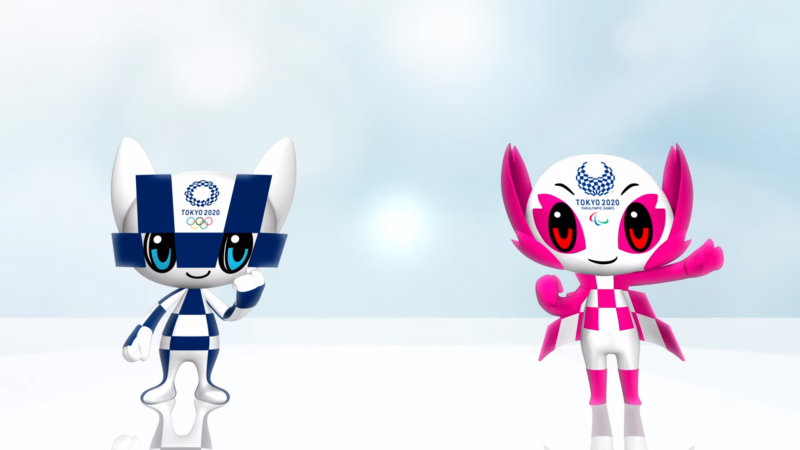 Japan loves a mascot. Perhaps the most famous is Kumamon (くまモン), the bear that is Kumamoto Prefecture’s mascot, who became even more popular after the series of earthquakes that beset the prefecture in April 2016. Mascots such as these are useful, if not crucial, when creating a brand, and they’re essential to ‘Cool Japan’, the project to popularize Japanese culture to an international audience. Mascots of course, can also be very cute and fun. My personal favorite is Domo-kun, the mascot of Japan’s public broadcaster NHK.

In late February 2018, Japan unveiled its mascots for the Tokyo 2020 Olympic and Paralympic Games. These mascots don’t have cool names—they’re known simply as ‘Olympic Mascot’ and ‘Paralympic Mascot’—but they look like anime or manga heroes and have superpowers and character descriptions.

Here is how Olympic mascot is described in English on the official website of the Tokyo 2020 Olympics:

The Olympic Mascot is a character that embodies both old tradition and new innovation. While cherishing tradition, it is always up to date with the latest news and information. The Mascot has a strong sense of justice and is very athletic. The Mascot also has a special power allowing it to move anywhere instantaneously. The Olympic Mascot was born from a traditional chequered pattern and a futuristic vision of the world.”

The Olympic mascot with its ability to move “anywhere instantaneously” sounds really cool. It’s a superpower I myself would definitely want, and by embodying both the traditional and the new, this mascot represents the best of Japan, a nation that appreciates the past but also looks forward to the new and embraces the future.

However, as a disabled person, I was more curious about the mascot for the Tokyo 2020 Paralympics, which is described as follows:

The Paralympic Mascot is a cool character with cherry tactile sense [i.e., shaped like a cherry blossom] and a supernatural power. The Mascot is usually calm; however, it gets very powerful when needed. It has a dignified inner strength and a kind heart that loves nature. It can talk with stones and the wind. It can also move things just by looking at them. The Paralympic Mascot was born from a traditional chequered pattern and cherry blossom flowers.

As a disabled person, I am very much in favor of having supernatural powers, and would be eager to have power over the wind—imagine all the typhoons I could prevent—and I am most definitely looking forward to hearing what stories stones have to tell me. A love for nature is also a very typically Japanese trait, one that is further highlighted by the Paralympic mascot’s ‘cherry tactile sense’, as there’s nothing more Japanese than sakura, the cherry blossom. 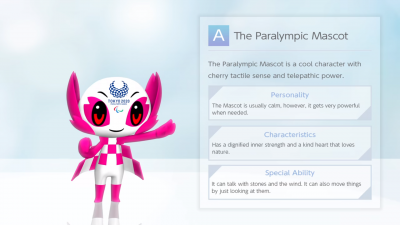 On a careful reading of its character description, however, you will notice that unlike its Olympic counterpart, the Paralympic mascot is not explicitly described as “athletic”. As a disabled person I wonder why that is the case, as it could suggest that Paralympians are not “athletic”. The same careful reader might also note that while the mascots are intended to be genderless – hence the generic names – the Olympic mascot is blue, a color often associated with boys, and the Paralympic one is pink, a color that is associated with girls in Japan and elsewhere in the world. The Paralympic Mascot also has stereotypically “feminine” traits such as ‘a ‘kind heart’.

These qualities did not go unnoticed by Dennis Frost, an associate professor at Kalamazoo College in Michigan who does research on the Paralympics in Japan.

“There. . . seems to be some implicit gendering going on here,” Frost told me during a Facebook private message chat. “I’m really struck by the way they are described. I also checked the Japanese language descriptions, too, just to make sure it wasn't an issue with odd translations. If anything, the distinctions are even more stark in the Japanese, with the Olympic Mascot characterized as strong and active, while the Paralympic one is characterized as almost entirely passive and soft.”

It is possible of course to read too much into such things, and nobody likes a pessimist. If physical versions of the mascots are sold as souvenirs, I shall certainly buy a Paralympic Mascot teddy bear to go alongside my Domo-kun. But in closing, I thought I would share the words of Grace Ohashi, a former Judo athlete who now lives with MS and is a frequent contributor to the NHK TV disability show ‘Barrier Free Variety’.