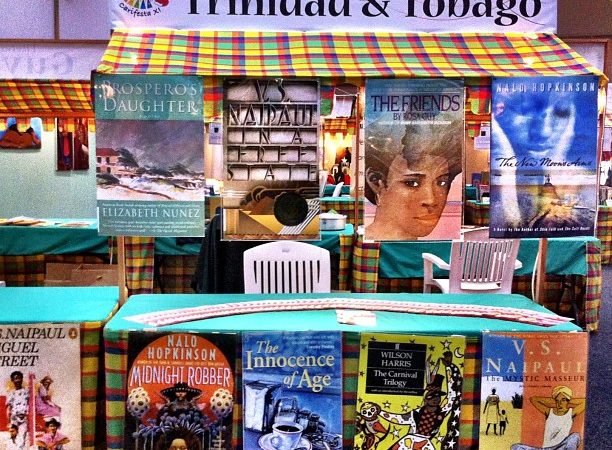 The Trinidad and Tobago literary arts booth at Carifesta XI, held in Suriname, which has proudly co-opted Guyanese-born Wilson Harris. His “Carnival Trilogy” is second from the right. Photo by Georgia Popplewell, CC BY-NC-SA 2.0.

Sir Wilson Harris, the innovative Guyanese writer who categorised his work as “quantum fiction”, died on March 8, 2018 at his home in England, at the age of 96.

Widely considered to be a pioneering voice in English literature, with a beguiling intellect and masterful grasp of language, Harris began his career in Guyana as a land surveyor. The job took him on jaunts to the country's fascinating interior, where he grew close the indigenous people who lived there. The knowledge they shared with him and the majestic backdrop of the Amazon rainforest would go on to feature in many of his novels. He explained, “I look to create a kind of community that has a literacy of the imagination in it, that can unlock polarisations and fanaticisms that bedevil us.”

Beginning in the mid 1940s, Harris’ poetry was published — alongside that of other important poets like Martin Carter — in Kyk-Over-Al, one of the region's definitive publications of the post-World War II era. Harris soon transitioned his metaphorical skill to other literary genres, expanding his writing to include essays and novels.

He also penned the “Carnival Trilogy” — “Carnival” (1985), “The Infinite Rehearsal” (1987), and “The Four Banks of the River of Space” (1990) — Carnival-themed re-imaginings of Dante’s “Paradiso”, Goethe’s “Faust”, and Homer’s “Odyssey”, quite fitting given the festival's rebellious beginnings which mimicked colonial traditions and gave them its own spin.

In 1993, Harris authored “Resurrection at Sorrow Hill”, which talks about the surveillance carried out by mental asylums on their charges, and which he cleverly juxtaposes against the insanity of real life. On the heels of this novel came “Jonestown” (1996), which delves into the mass-suicide and murder of the followers of cult leader Jim Jones. Such themes could be interpreted as ripple effects of colonialism — Harris never stopped investigating the modern-day structures that continued to enforce similar types of control. Harris’ last novel was “The Ghost of Memory”, which was published in 2006.

As news of his death broke, tributes poured in on social media, with bibliophiles thanking Harris for taking them on journeys of imagination:

Rest in Peace, Sir Wilson Harris (March 24, 1921-March 8, 2018). An incredible loss. If you haven’t read his work, please, do yourself a favor check it out. His essays are a special delight. Start there, and then explore his novels. #WilsonHarris#RIPhttps://t.co/MKpetcrkoI

My favourite book Palace of the Peacocks I still have my copy used for A Level 1982 RIP Sir #WilsonHarris https://t.co/riQKU8fQos

Many noted that despite the fact that his books could be “difficult” reads, they were well worth it:

“Difficult” often denotes a radical break with the syntax and grammar of market-driven, neo-colonial narrative. #WilsonHarris

Sir #WilsonHarris – a challenging writer – but once you got him, Eureka – genius! #RIP https://t.co/H1M4YDUYho

[…] As a teenager I struggled to understand his writings because they were so nuanced, so layered, so connotative, so associative and so symbolic.

One Facebook user called Harris “an extraordinary, inimitable visionary”, Barbadian Annalee Davis noted that “the Caribbean and the UK have lost one of their finest writers”, and while young Guyanese writer Ruel Johnson “never bought into the legend of Harris’ work”, he “begrudgingly concede[d] that the legend was not unwarranted”.

I will forever be indebted to Wilson Harris. I owe my academic career to him. He was the cornerstone, the foundation of my Graduate thesis. I used his ideas, essays, and novels in every other paragraph I wrote. The indigenous people of the Caribbean, the landscape, alternative modes of worship like Voodoo, and native myth were revived and given new meaning because of him. He changed the way Caribbean literature is written and read. Rest in power, Sir Harris, an entire region will forever mourn and celebrate you.

Yet, some contended that Harris was not given his due within the Caribbean. In 2014, there was a Twitter debate over who that year's Nobel Laureate in Literature should be, and one fan suggested it should to go a “visionary” like Harris, especially because he was “up there in yrs & you cannot win a posthumous @Nobelprize_org Prize.” But while Harris was honoured during his lifetime — including winning the Guyana Prize for Literature on two separate occasions and being knighted in 2010 — the Nobel was not to be.

He never received the recognition he deserved. I loved his work and his theory of fossil memories.

Way ahead of his time. He made my students quake but I insisted on including palace in my Caribbean Prose course

Very few thinkers have had an influence on me as great as his. He is one of the most innovative and radical writers and thinkers (in his style and in his approach to politics) of the last two centuries. The very idea that in all oppositions and differences we can find a ‘half blind groping’ towards new modes of community or being or art that can devour and reinvent those oppositions and differences…that's where everything I do started to make sense.

RIP, Sir Wilson. Thanks for the incredible and exhausting novels (though clearly all of them were mere iterations of one long densely poetic vision). […]

Harris, who once said that “only a dialogue with the past can produce originality”, has left behind a body of work that will no doubt bequeath that legacy onto younger writers, some of whom weighed in on his passing.

In the words of Facebook user Subraj Akash Singh:

Saddened to hear of the passing of one of the greatest Caribbean writers who ever lived… ‘Palace of the Peacock’ changed my life because it changed my mind about what a novel could be. Harris has died, but his oeuvre will certainly live on forever.