International Women's Day in Latin America Was a Day of Protest, Debate and Resistance 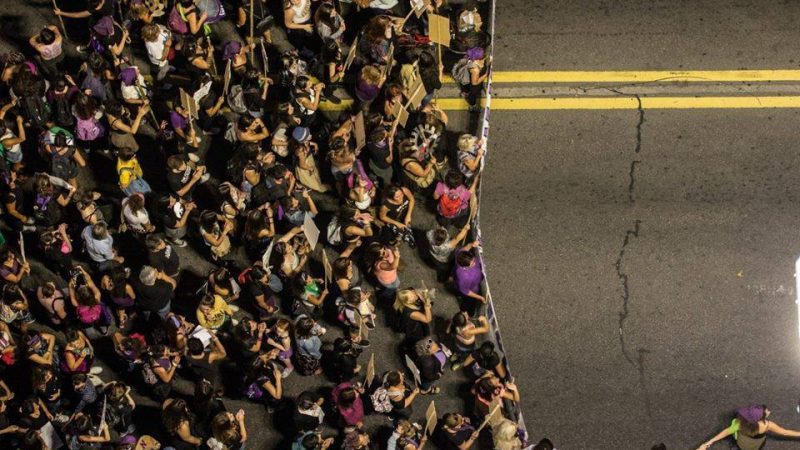 Images from the Women's International Day Demonstration taken on March 8th in Montevideo, Uruguay. Shared by online collective Emergentes and used with permission.

In Latin America, March 8th was marked by protests and commemorations both online and offline. Thousands of women took to the streets and to their social networks to join the demonstrations and voice their concerns. Although the motivation behind each protest was unique to its specific country, women across the region were united in resistance against the difficult realities faced by women Latin America — the most violent region of the world for women.

In Chile, protests were linked to increased economic instability marked by invisible and unpaid work that disproportionally affects women, while the center of discussion in Argentina's gatherings continued to revolve around issues of legal and safe abortion. Women in Puerto Rico marched and also gathered in public debates that included cultural and artistic presentations reminding the public about the double burden placed on women in the current economic situation. Other forms of protests were lead by female journalists from all over the region who shared different testimonies regarding their profession. Luz Mely Reyes, Co-founder and general director of Efecto Cocuyo wrote:

We're not only facing a profession historically dominated by them [men], like many other professions. We also face a media system that has been co-opted by capitalistic interests and dominated by men. [Even in] the highest positions, we face sources, interviewees or men in power that delegitimize us as journalists just because we are women.

Many of the demonstrations were shared under the hashtags #8M or #DiaInternacionalDeLaMujer (International Women's Day) where pictures and videos coming from different cities in the region are still flowing online.

Networks also became learning spaces as many feminists and online media groups shared infographics and memes explaining how March 8th was not a celebration day but an opportunity to commemorate the many struggles women face globally. The online media organization Pictoline, as it has done in other years, created an infographic which put together many of the arguments shared online about how men can best support women: 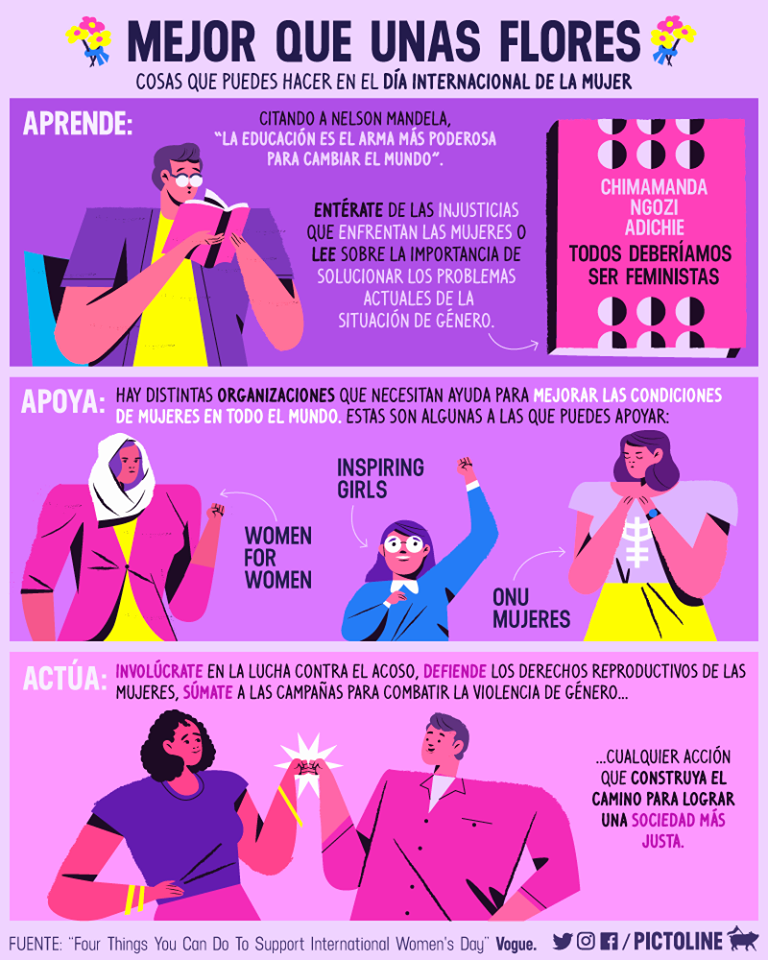 Things you can do on International Women's Day.

Learn: Quoting Nelson Mandela, “education is the most powerful weapon”. Learn about injustices that women face or about the importance of solving current problems regarding gender.

Support: There are different organizations that need help to improve women's situation around the world. These are some of the ones you can help: Inspiring girls, Women for Women, ONU Women

Act: Get involve in the battle against harassment, defend women's reproductive rights and join campaigns against gender violence. Any action paving the way towards a fairer society.

In the image: Why shouldn't you congratulate women for being women on March 8th? Because we end up celebrating femininity instead equal rights.
Between 1909 and 1917 women organized to demand better salaries, the right to vote, equality. In 1975 the UN determined that March 8th would be the day in which we commemorate these struggles.
So, congratulating a woman on March 8th is like congratulating a student on Octiber the 2nd [the day in which Mexico commemorates the Tlatelolco Massacre in which hundreds of people were reported to have been killed].
We commemorate a struggle that is not over.
In the tweet: No, Alejandro, on #InternationalWomensDay you shouldn't be ‘celebrating her’ or giving her roses.

Meanwhile, memes were also a very popular and direct way to explain this same point, like the following one using a pop culture reference from American animated series The Simpsons: 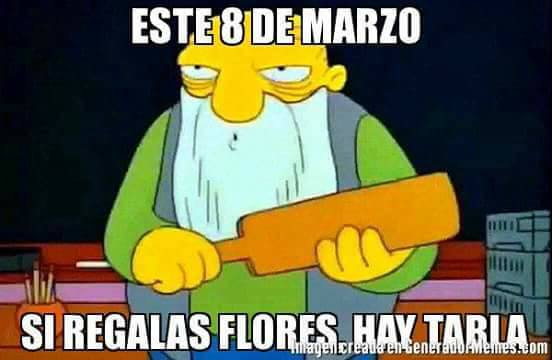 This March 8th, if you give flowers you get a paddlin’

The complexity around the debate over women's rights wasn't limited to misogynistic vs. feminist clashes.  Participation by women of color and transwomen also reflected the different trends, privileges, and oppressions within women's rights movement. Some of the discussions underlined the lack of diversity and the exclusive nature behind many calls for the strike — seen by many non-white feminists as something designed and organized from a very specific and privileged part of society. For many of these women, the demonstrations and the strikes don't constitute a victory but an example of a very complex reality.

In an interview with Eldiario.es, Antoinette Torres Soler, the founder and co-writer of the collective site Afroféminas, explained why many women of color didn't join the strike:

We chose to follow a different path […] Black feminism has a different history. That's a fact, it's not capriciousness. Also, [black feminism] has very different references, they're part of the traces left by colonizations and how women, black woman, were deconstructed, or rather, dehumanized. Our struggle, our fundamental concern is the dehumanization of racialized women. But this dehumanization does not come only from men, it also comes from women […] We asked, we demanded to be visible inside of the same project, even taking into account that our history is different. The fact that our history is different implies that you have to talk about different things. For this I've received a lot of criticism. People think we try to be exclude ourselves, but we have always been excluded.

In Venezuela, political divisions also permeated the debate. The hashtags #8M and #NosotrasParamos (We strike) were joined by women who support the government. In response, the hashtag #EspejismoFeminista (Feminist Mirage) was created to denounce chauvinist behavior by government representatives. The collective portal Caracas Chronicles summarizes many of the reactions:

Far from protecting women, your government takes advantage of them. Hypocritically speaking of women’s rights, to produce politically “inclusive” speeches is just another way of abuse.
On a day like this, I had to tell you, my dear socialist, self-proclaimed feminist:

In Mexico, women belonging to the Zapatista movement in Chiapas, a left-wing political and militant group, organized the first International Political Artistic and Cultural Encounter of Women who Struggle. In their main message, they underlined the different ways that their fight for justice is not only related to their gender, but also to their race, class and politics.

Because I've experienced being looked down on, humiliated, being made fun of. The violence the strikes, the deaths for being a woman, for being indigenous, for being poor and now for being zapatista. Know that it wasn't always a man who would exploit me, steal from me, humiliate me, strike me, despise me or kill me. Often times those who did all that to me were women. And they still do.

Nevertheless, they finish with an ideal that can very well summarize the common ground of all of those struggling for women's fundamental rights:

[But] I also grew up in resistence and saw how my women partners built schools, hospitals, collective work and autonomous governments […] I saw that rebelliousness, the resistance and the struggle are also a celebration, even if sometimes there's no music or dance, and only the drag of work, of all the preparation, of the resistance.