From Graffiti to Politics, Anti-Semitic and Neo-Nazi Speech Is Becoming More Visible in Eastern Europe 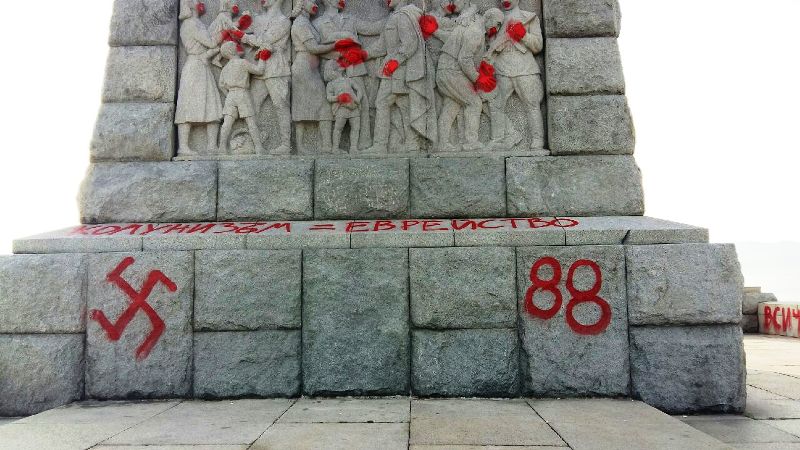 Neo-Nazi graffiti on the monument to Soviet soldiers in Plovdiv, Bulgaria, 10 November 2017. Text reading “Communism = Jewishness.” 88 is a Neo-Nazi code for “Heil Hitler.” Other graffiti on the crime scene include text such as “Kill the Jews” and “Crystal night.” Photo by PodTepeto.com.

Recent events in Eastern Europe show a rise in antisemitism rhetoric, including in European Union (EU) members like Bulgaria and other EU candidate countries.

In November, monuments to the Soviet army in the cities of Plovdiv and Sofia, Bulgaria, a country that was a close ally of the USSR during its existence, were vandalized with anti-Semitic graffiti. Russia's foreign ministry spokesperson, instead of condemning the graphic show of anti-Semitism, used the fact to try to revise the history of the rescue of the Bulgarian Jews during World War II.

Bulgaria joined World War II on the side of Nazi Germany, and as such perpetrated the Holocaust of Jews from Macedonia and Northern Greece in 1943. However the pro-fascist authorities faced difficulties in exterminating the rest of the Jewish population, who were mostly saved through efforts by domestic pro-democratic forces and the Bulgarian Orthodox Church. On September 9, 1944, after the Red Army occupied the country, Bulgaria changed its government and switched its support to the Allies.

The attempt to exploit the anti-Semitic graffiti for propaganda purposes, and present the USSR as savior of Bulgarian Jews, resulted in pushback from the Bulgarian foreign ministry spokesperson, the American Jewish Committee, as well as different media outlets and influential bloggers.

A worrisome aspect resulting from the debate, however, was that because the graffiti appeared on Soviet monuments, right-wing political parties in Bulgaria largely gave the anti-Semitism a “free pass”, under the guise that opposing communism is more important.

A string of recent incidents

I started counting the swastikas sometime in December. Most days I would see at least one, but usually there were more. There were two between my apartment and my favorite bakery, and four on the way to my dance class. More than five visible through the bus window on the ride between Sofia and Plovdiv. Eleven in the first two hours of the drive north through the mountain pass toward Veliko Tarnovo. There are other neo-Nazi, white supremacist, and ultra-nationalist symbols, too.

Adela Peeva directed a 2017 documentary titled  “Long Live Bulgaria” about rising nationalism in smaller cities in the country. In an interview with Bulgarian public television, she explained that what she saw were strong nationalistic views among those populations, combined with anti-Semitism and hate of the Roma population. A prime example can be seen in the opening scenes of the film, including the trailer below, in which a schoolboy states, “The national holiday is not for the foreigners or for the Gypsies.”

In October 2017, Bulgarian literature critic Dimitar Kambourov was accused by a number of prominent figures, and at least one Jewish organization, of using anti-Semitic speech in his review of the documentary “Angel Wagenstein – Art Is A Weapon”, about the life of screenwriter Angel Wagenstein, including his time in a Jewish brigade during wartime Bulgaria. After the uproar, Kambourov's review was taken down from the portal “Kultura” (culture), with an apology by the editor-in-chief. Another news outlet, Liberal Review, published a story, in which the author said that Kambourov has written in the past other racist texts.

Like the November graffiti, where anti-communism was used as an excuse for anti-Semitism, the heated discussion around the movie review was also focused on the fact that it was presented through an anti-communist point of view.

In 1943, the deportation of 48,000 Jews from Bulgaria was stopped, but only after 11,343 people were already sent away from the occupied territories in Northern Greece and Macedonia. In February 2018, Bulgarian far-right extremists continued to honor the memory of one of the proponents of the Holocaust (assassinated by anti-Nazi fighters in 1943), by holding a parade in the center of Sofia, the capital, in his honor.

The result of all of the above, is a clear sign that more educational work is needed, and one could hope that Bulgaria would take the lead and confront anti-Semitism.

He's not alone in warning about the need to do something about anti-Semitism. Civil society activists from Central and Eastern Europe have been sounding the alarm about increasingly emboldened hate speech against Jewish people and apology for perpetrators of the Holocaust, as well as about the dangers of allowing it to pass with impunity.

For example, at a November 13, 2017 march of far-right nationalists in Warsaw, marking the anniversary of Poland's independence, chants calling for the country to be free of Jews were heard, according to the Times of Israel.

In Macedonia, a candidate for the EU, social media users took the occasion of Holocaust Memorial Day, January 28, to revisit a short-lived scandal in 2011 involving the country's current president, Gjorge Ivanov, who was elected in 2009 and 2014 with support by right-wing populist party VMRO-DPMNE.

In 2011 a newspaper called Shpic revealed that Ivanov, who previously worked as a political science professor, had co-written a university textbook which defined anti-Semitism as “hating Jews more than necessary.” Several months later, that newspaper was shut down by the government. The textbook is still in use.

Tweet: One of the endless ‘pearls of wisdom’ by #Jorge [derogatory nickname for Gjorge Ivanov]:
“An anti-Semite is a person who hates Jews more than necessary”
Source: “Political theories – Antiquity”; authors Gjorge Ivanov, PhD, and Svetomir Škarić, PhD
Bonus: [link to an article by journalist] Zvezdan Georgievski “Antisemitism on the presidential court”
Photo: Excerpt from the book with the quote underlined, and photos of Ivanov and Škarić.

While not as common as in Bulgaria, swastika graffiti do pollute the walls of Macedonia too. Over the last several years, when graffiti of this nature appears, or when there is the occasional vandalism against the Jewish Cemetery in the southern city of Bitola, the public pays very little attention, and the perpetrators are not brought to justice.

An exception to the established practice of ignoring neo-Nazi and anti-Semitic hate speech is a recent announcement by the Macedonian police about the results of an investigation after swastika graffiti painted on the memorial museum of the uprising against fascism as well as some other buildings in the city of Prilep. On March 7, 2018, they issued an announcement that they filed charges against a suspect identified as K.D. (15) under the Criminal Code article 264 for “damage or destruction of protected objects, cultural heritage or natural rarities”. 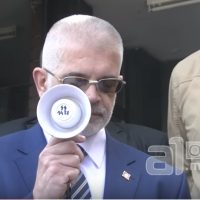 Neo-Nazi symbols on the megaphone used by Macedonian right-wing politician Todor Petrov. Screenshot from a video clip by A1on.

Widespread understanding of the coded neo-Nazi symbols such as those displayed on the Plovdiv, Bulgaria monument is low. When in March 2016 a Macedonian right-wing politician and former member of parliament, Todor Petrov, used a megaphone branded with “SS 14 88″ (meaning Schutzstaffel, Fourteen Words, Heil Hitler) at a nationalist rally, the only reaction came from the then-European Union mediator of the negotiations between political parties, Belgian expert Peter Vanhoutte.

Several media quoted his Facebook post expressing outrage, but there were little additional actions by domestic actors or institutions. Petrov, who has close ties with VMRO-DPMNE, the former governing party which presents itself as center-right and as such is a member of European People's Party, has since stopped using the megaphone. However, he continues to participate in numerous hate-filled public events organized by their proxy groups, and is currently engaged in rallies and diaspora announcements against the negotiations regarding the Macedonia name issue.

Civil society activists and other progressive forces in the region have been warning for years about the corrosive effects of hate speech on social cohesion. It's no coincidence, then that in recent months, European institutions and NATO have declared that confronting extremism in the region is one of their top priorities.