For Jordanian Women, a Year of Hard-Won Progress and Continuing Challenges 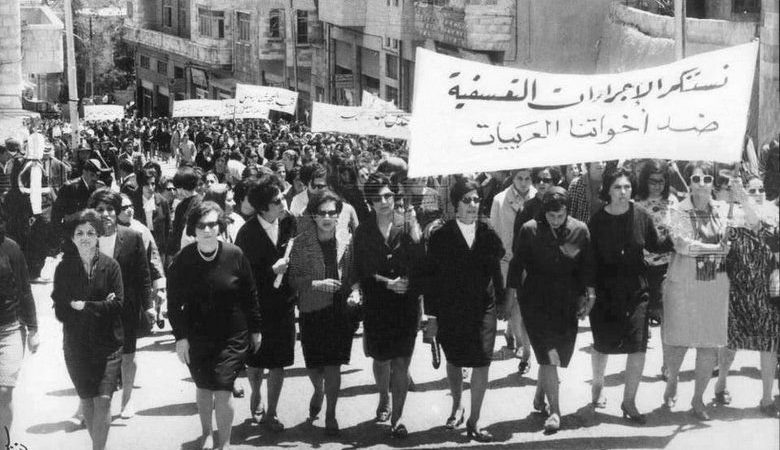 Women protesters in the Jordanian capital Amman in 1968. Photo released to the public domain.

In the month that commemorates Women’s Day, it is important to highlight what Jordanian women have achieved in the fight for their rights throughout 2017. Just one year ago, women were not in the same condition as they are now.

It is just as important, however, to note that obstacles still exist.

Despite a successful campaign to repeal a legal loophole allowing rapists to marry their victims, numerous challenges still lie ahead toward achieving gender equality in Jordan, including child marriage, barriers to joining the job market, and a nationality law that bans women from passing down their nationality to their children.

Article 308 of the Jordanian penal code originally stated that rapists could avoid jail time if they marry their victims and remain married for at least three to five years. According to a study by a local civil society group, a total of 70% of Jordanians regarded this as a loophole for male rapists to escape punishment, while 30% considered it to be a way of “saving a girl’s honor” in a conservative society such as Jordan’s.

After 20 years of pressure from women’s right activists, Muslim scholars, and Christian priests, the article was amended in 2016 to include only incidents of rape in which the girl is aged 15 to 18, and with consent. Given that girls within that age range are still minors — and even if they weren’t, it is unlikely that a victim would want to marry her rapist — 63 women’s rights organizations started a campaign over social media urging for the article to be scrapped altogether.

On August 1, 2017, the article finally passed cabinet, after months of sessions.

While the abolishment of Article 308 was a success, 2017 also saw the cabinet approve new regulations allowing for minors as young as 15 to get married if two judges authorize the union.

Many Jordanians are against the bill, and have mocked the government on social media for the decision. A global competition was even launched to award the most expressive cartoon against child marriage.

Statistics have indicated that nearly 20% of marriages in Jordan involve minors, who at the same time cannot vote, drive or drink. 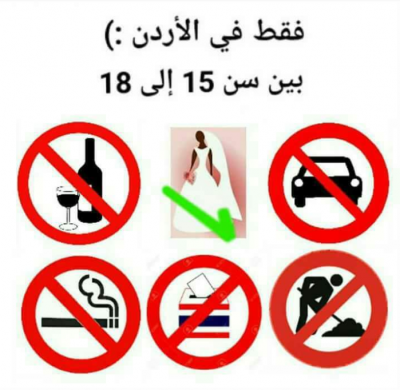 In Jordan, minors aged between 15 and 18 can get married, but they are not allowed to drink, drive or vote.

Child marriage can often mean the end of girls’ education. Although the law is worded to protect the right to education despite marriage, making it a condition to get the license, statistics show otherwise.

According to the Higher Population Council, the majority of women who married before 18 were only educated up to the primary level or lower.

Another report issued by the Sisterhood Is Global Institute showed that 33% of illiterate Jordanian women were married at the age of 17 or younger.

This law has obvious repercussions, as girls who marry before 18 years of age are more likely to be subject to domestic violence.

Another problem arises with this law when it comes to the issue of Syrian refugees who are being forced to marry older Jordanians out of fear and the need for protection.

Stories indicate that older Jordanians are offering Syrian refugees employment and other privileges in exchange for the hand in marriage of a female relative. For a one-time payment as low as US $140, Syrian girls are being offered up as brides.

A total of 39.5% of female Syrian refugees are victims of child marriage in Jordan, with 48% of those being forced to marry men at least ten years their senior. These girls are being thrown into the unknown, with many of them exposed to exploitation, rape, denial of an education, and pregnancy difficulties.

The rate of unemployment for women in Jordan is higher than for men: 33% versus 13.9%. In response, a national Jordanian petrol company, JoPetrol, launched a project in September 2017 to hire women as gas station attendants, while offering them flexible shifts (four hours maximum, and in the morning), ”rewarding” pay, and safe working conditions.

There was a fair amount of objection from the public, however. Some attacked JoPetrol for trying to “grab attention“, or opposed the project because the dominant conservative mindset in Jordan considers it both shameful and dangerous for a woman to be working in the street and “doing a man's job”.

Others supported the move, saying that Jordan needs to start taking progressive steps towards creating a better workforce. Moreover, some have compared this to when the Traffic Police started hiring women in 2003, predicting that the backlash will fade away just as it did then.

For its part, JoPetrol says it will not eliminate the project; rather, it plans on expanding it. To protect its female employees from harm, such as violence or harassment by citizens who are against the initiative, JoPetrol has them working at a gas station in Al-Madina Al Monawara, a busy street in the centre of the capital, Amman.

When it comes to the job market, objectification of women is normalized in Jordan. The country's newspapers are filled with ads that go along the lines of “good looking, no need for prior qualification”, or that specify the female job candidate has to be a non-hijabi. A number of these ads are misleading, and turn out to be dangerous traps for female applicants.

An investigation was launched using a hidden camera in 11 job interviews that were conducted through these ambiguous ads; half of the interviews ended up with the female applicants either being sexually harassed or asked to work as sex workers.

The newspapers continue to run them, however, despite complaints, because they are lucrative.

According to the Jordanian citizenship law, women cannot pass down nationality to their children. Thus, children whose mothers are Jordanian and whose fathers are foreigners are treated as outsiders and denied citizenship.

The lack of nationality translates into curtailed rights. For example, students who do not hold a Jordanian passport have to enroll in the International Program — the fees for which can reach up to eight times higher than the Competitive Program that nationals can enroll in.

In August 2017, the cabinet passed a bill stating that the children of Jordanian women will receive equal treatment when it comes to higher education at Jordanian universities, and will have a privileges card to show for it.

This privileges card is supposed to be used for residency and work permits, driving licences and real-estate ownership. However, its actual influence is limited — it is not recognized by police officers or the public sector, and card holders have to go through complicated government procedures to be granted anything through it.

The number of children born to Jordanian mothers and foreign fathers who remain without citizenship stands at about 360,000. Meanwhile, authorities have made it easier for wealthy investors to acquire Jordanian citizenship.

Jordanians are taking steps to fight this legislation. A petition on social media, which has received 3,800 signatures so far, is calling for Jordan's controversial nationality law to be abolished, and another campaign, entitled “My mother is Jordanian and her nationality is my right”, is also attracting a lot of support.