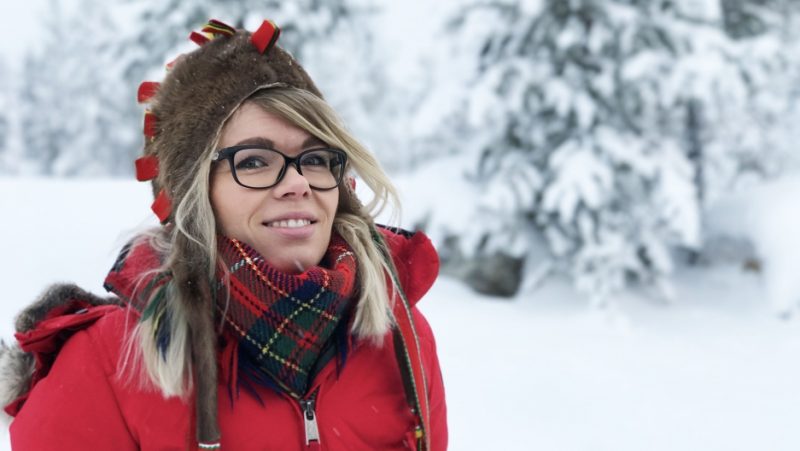 Inka Saara Arttijeff is the adviser to the president of the Sámi Parliament and hails from a family of Sámi reindeer herders. She represents Finland at international climate change summits. Credit: Sonia Narang/PRI

This story by Sonia Narang for GlobalPost originally appeared on PRI.org on March 7, 2018, and is republished here as part of a partnership between PRI and Global Voices.

Inka Saara Arttijeff and her family gather in the cozy kitchen of their red, wooden house, as a pot of soup simmers on the stove. They live at the edge of a frozen lake in the storybook village of Nellim, up towards the far reaches of northern Finland. It’s early February, and the sun here begins to set around 3 p.m. Arttijeff is part of a family of indigenous Sámi reindeer herders who are unfazed by short days in subzero weather.

The Sámi are indigenous to the northern parts of Finland, as well as Sweden, Norway and Russia, known for their centuries-old tradition of herding reindeer. (Reindeer are considered “semidomesticated” in Finland, and guided through their seasonal migrations by the herders.) However, the warming climate has threatened to disrupt the Sámi people's tradition of reindeer herding. As Arctic temperatures rise more than twice as fast as the global average, reindeer herders are struggling to cope with increasingly unpredictable and extreme weather.

Outside Arttijeff’s home, vast expanses of snow-covered trees fill the forest landscape. However, logging has started to encroach upon forests where Sámi people herd. The combination of weather changes and increased tree cutting has made it harder for reindeer to find food, and it’s altered their migration patterns.

“We are born to be reindeer herders; it's part of our identity,” she added. “It's hard to think about your life without it.”

She spent her childhood around reindeer, and her herd learned to recognize her. “When I was a kid, I used to take a calf, and I would tame it and take it to walk with me. So, it was my pet,” she said with a laugh. 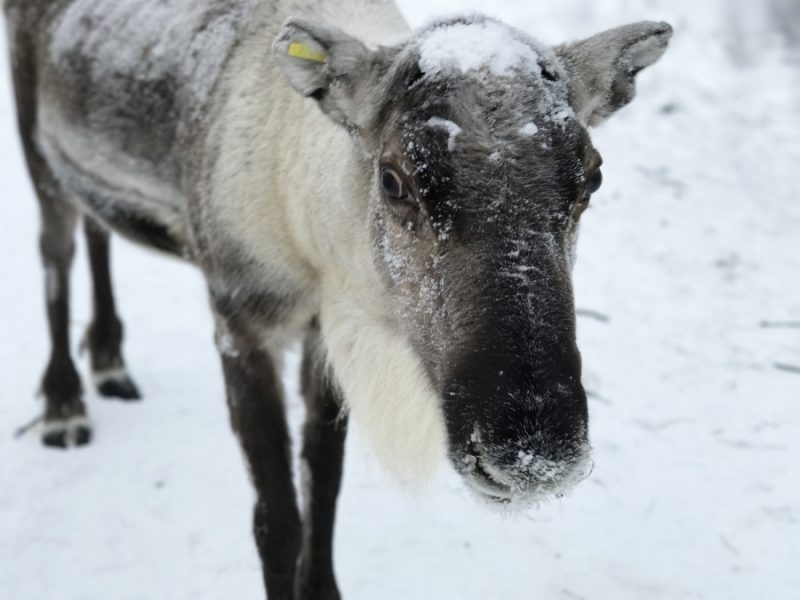 Sámi culture has always been a big part of her life, and Arttijeff infuses her clothing style with traditional Sámi accessories, like the handmade hat she wears outside and the patterned shawl with a round, golden brooch she dons indoors.

Arttijeff is one of a growing number of outspoken Sámi women who are taking their voices well beyond the borders of their small villages. The 33-year-old is the adviser to the female president of the Sámi Parliament, Tiina Sanila-Aikio, and represents Finland on the world’s stage. Every year, Arttijeff joins a delegation of indigenous representatives at the UN’s climate change talks. In between all that, she is also a graduate student in international relations and law.

Arttijeff says it’s an honor for her to represent the Sámi people and her country in international summits. “It sounds very weird, but before, the non-Sámis and nonindigenous were actually deciding for us. Now, we can be part of the decision-making, and they actually take us into account,” she said.

An ancient tradition in flux

For indigenous reindeer herders, a slight temperature increase can have drastic repercussions. Reindeer used to be able to easily find their favorite food, lichen, a fungus-algae combination, in the winter snow. However, milder winters have caused melting and refreezing of precipitation on the ground, preventing reindeer from smelling and digging for meals trapped under hardened ice.

Arttijeff describes the weather changes she’s experienced over the years, with traditional snowfall changing to rain. “It can snow and then it can rain, and then it freezes again … that means the snow gets hard,” she said. “Reindeer cannot find food in the forest … and that makes them weaker,” Arttijeff said. “Your herd gets smaller and smaller.” 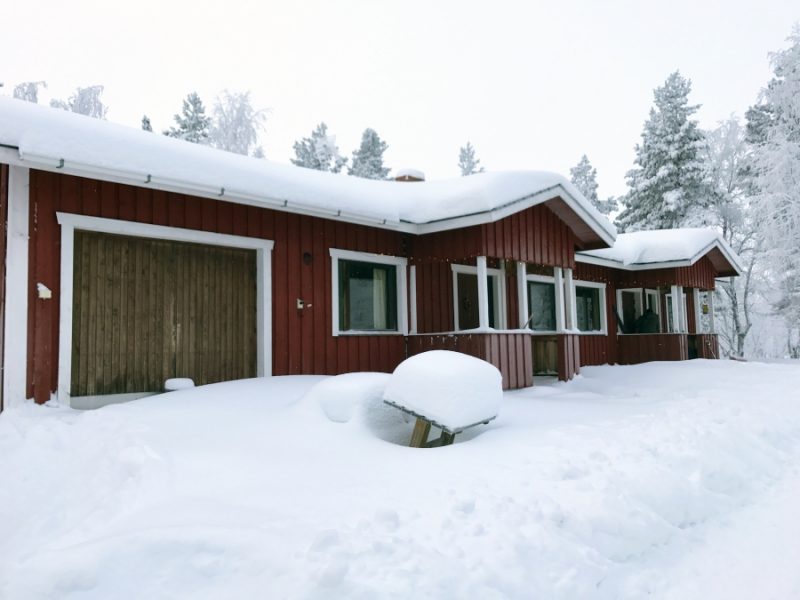 Inka Saara Arttijeff and her family live in this house in one of the first Sámi villages. This village was established at the edge of a lake when the Sámi people transitioned from a nomadic lifestyle to living in homes. Credit: Sonia Narang/PRI

Scientists in Finland have studied these impacts, too. “Arctic sea areas are very warm in early winter, forming moist air,” said Jouko Kumpula, a scientist at the Natural Resources Institute Finland. “This [air] comes to land, it rains on the snow and that is bad for reindeer.”

On top of this, the warming climate has made it more comfortable for harmful bugs. “New parasites and diseases are expanding towards the north due to climate change and can also infect reindeer,” Kumpula said.

At the Sámi village home, Arttijeff and her uncle discuss the issue of logging in their region. The 68-year-old Sámi elder, Kalle Paadar, has been herding reindeer his entire life and describes how forestry activity is a more noticeable problem. As trees are cut down, the vegetation of the forest changes and reindeer alter their migration routes. Logging also creates timber waste that litters the ground and covers up food sources for reindeer. “For reindeer herding, [we] need forest that is healthy,” Arttijeff said.

Saara Tervaniemi also points to forestry as one of the area’s biggest threats. She’s a reindeer herder and mother of three young children. “We are losing our winter grazing lands because of the forest industry,” she said, talking from inside the headquarters of the Sámi Parliament.

Finland’s state-owned forestry agency, Metsähallitus, manages about one-third of the country’s forests, and it’s also responsible for harvesting and selling timber. Kirsi-Marja Korhonen, a regional director and environmental specialist at Metsähallitus, says they work closely with Sámi communities to negotiate tree cutting in reindeer herding areas. Korhonen notes 60 percent of trees on Sámi lands are in protected areas. That still leaves large swaths of Sámi forests up for grabs, reindeer herders say, and they point to clear-cutting of productive forests.

Tervaniemi says it’s critical to monitor forestry activities on her people’s lands since logging is eroding the culture she hopes to pass down to her children. Tervaniemi learned how to herd as a child, during reindeer roundups with her father. Her children aspire to follow in their parents’ footsteps.

“As a mother, it's difficult to think that they dream to be reindeer herders when you know there's so many big threats [to] reindeer herding in our area,” she said. “If this forest logging continues as planned, it will be really challenging for my children to continue reindeer herding.” 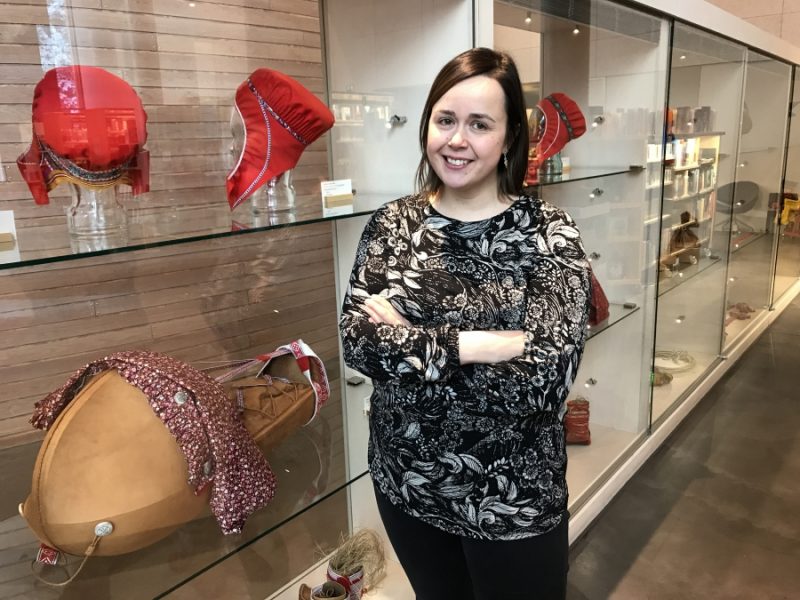 This way of life runs through the Sámi people’s blood, according to Tervaniemi. “If you say to my husband or reindeer herders in our district to find some other job, I don't think that they have any other choice. They have grown up herding reindeer. It’s our life, and it's a way of existing,” she said.

Tervaniemi, 37, is a member of the Saami Council, which brings together Sámi representatives from four countries. “You have to be a little bit [like an] activist to support your livelihood and your culture,” she said. Sámi women have always been on equal footing with men, and many play a significant role in political organizations, according to Tervaniemi, who is also working on a PhD in Sámi issues.

That’s evident in Finland’s Sámi Parliament, which is split evenly between men and women and led by a woman president. Also, regional women's groups such as Sarahkka — named for the mythical daughter of the ancient mother and father of the Sámi — and the Sámi NissonForum (Women's Forum) bring together Sámi women from the northern countries. They focus on gender equality and indigenous political issues, including land and water rights.​

Since Sámi women are primarily responsible for child care and passing on their culture to the next generation, reindeer herding has become an important issue for them, especially as logging and climate change have intensified in recent years. 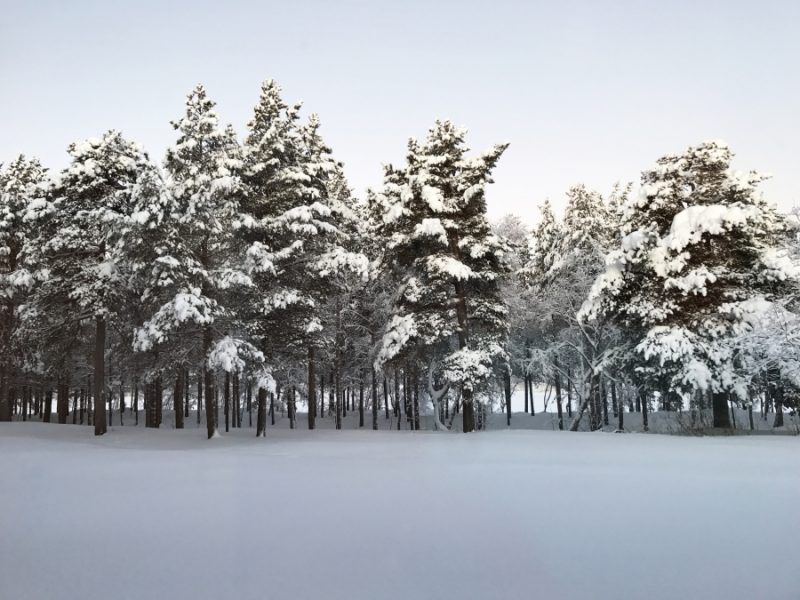 Forests cover 75 percent of Finland’s land, and Sámi reindeer herders are concerned about logging on grazing lands. This photo is the view from the Sámi Parliament building in northern Finland. Credit: Sonia Narang/PRI

“The reindeer itself has such a big meaning in Sámi culture,” Tervaniemi said, adding, “and, being in nature, being with reindeer — it's so beautiful.”

Arttijeff also speaks wistfully about the Sámi people’s connection to their reindeer. “When we don't see them, we miss them. We miss the smell and how they look and how they sound. They recognize our voice, we call them, and they come to us.”

It’s not just reindeer herding that’s at risk — it’s the four other Sámi livelihoods, too: fishing, gathering, hunting and handicrafts. “For all of those, you need materials from nature,” Arttijeff says. “If the nature changes, you cannot do traditional livelihoods anymore. So, if that changes, everything changes for us.”