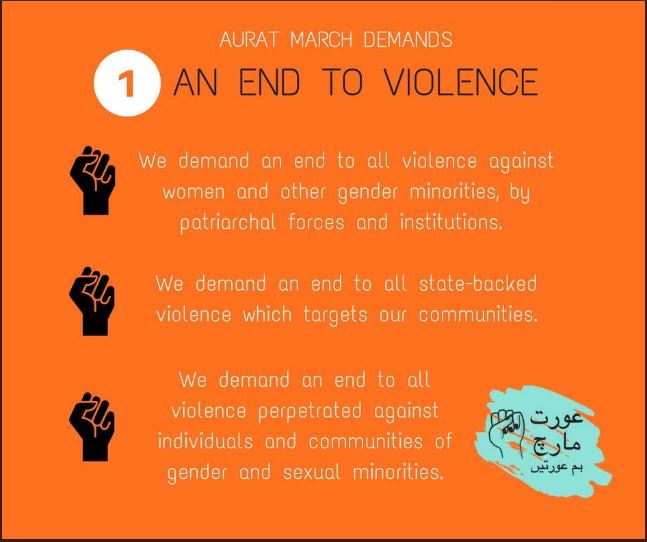 March 8 International Women's Day ushered in the “rise of sisterhood” against misogyny in Pakistan. Women and men took to the streets of major cities of Karachi, Lahore, and Islamabad demanding economic, reproductive and environmental justice for women.

The event was initially planned for Karachi. However, solidarity marches sprung up in Lahore and Islamabad showing a united confrontation against gender-bias and misogyny.

Pakistani feminist organisations such as the Awami Workers Party, The Feminist Collective, Women's Collective and Girls at Dhabas organized the marches under one platform called “Hum Auratien” (meaning “We Women” in Urdu).

Due to the growing numbers of cases of violence against women, march organisers believe that this is the beginning of a show of outrage by women.

Talking to The Express Tribune, Sadia Khatri, a founding member of Girls at Dhabas said:

There is a lot of anger that is finally releasing and this march was a way to direct that anger somewhere for something powerful and beautiful.

Massive crowds were seen at all marches.

Lawyer and activist Jibran Nasir tweeted a video from the march in Karachi:

Women and their male allies must fight this fight together ????#WomensDay #AuratMarch #AuratMarch2018 #InternationalWomensDay pic.twitter.com/bYwTWTA581

Women not only chanted slogans of equality but danced and sang celebrating womanhood. Aurat March 2018 posted:

They also called out for transgender rights with posters reading: “Transgender women are women. Shut up!”

Marchers paid tribute to important Pakistani feminist figures in the struggle against gender-based violence, including Asma Jahangir and Sabeen Mahmud. Jahangir died from a cardiac arrest on February 11, 2018 while Mahmud was assassinated on April 24, 2015.

Looking at all the women organizing the #AuratMarch I can't help but notice how many of them I got to know via @sabeen. Our generation owes so much to her, who mentored encouraged and taught so many of us. Missing you today. #InternationalWomensDay

Women from all walks of life joined the march, whether be it working women, housewives or laborers. A netizen named Faizan targeted those who believed the march to be a fancy elitist event:

oufff beautiful scenes from the #auratmarch, showing participation from all backgrounds. quite the in your face to people here ridiculing it as just an elite event.

As a whole, the Aurat March (Women March) 2018 is the beginning of the struggle for an equal society, and a call by the people to stand firm against misogyny.