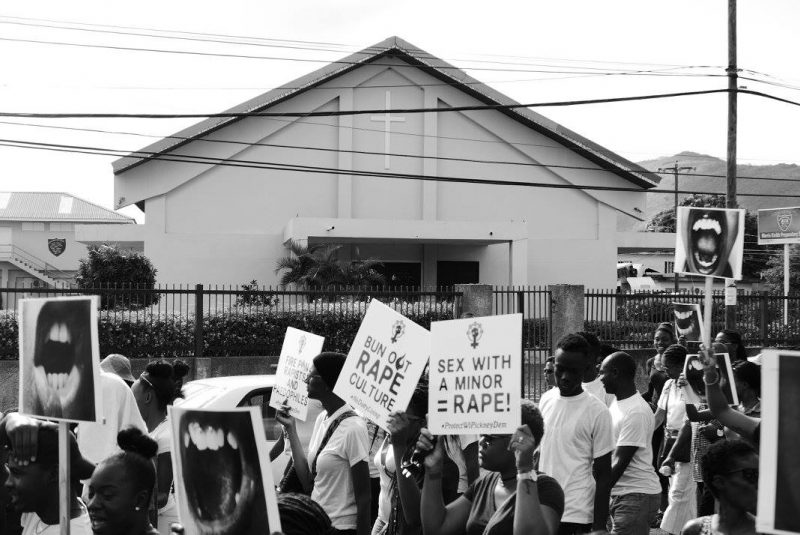 Jamaicans celebrated International Women's Day in style this year, with numerous celebratory events and greetings flooding social media — but online celebrations took a pause around midday, when news broke that a former pastor in the Moravian Church, Rupert Clarke, was sentenced to eight years in prison for two counts of “having sex with a minor”. In November 2017, Clarke pled guilty to having sex with two sisters, who were both under 16 at the time.

Netizens expressed their disapproval at what they saw as a very light sentence — considerably less than the maximum 15 years often prescribed in similar cases. Clarke's reduced sentence was attributed to a recent move by the Ministry of Justice to speed up cases through the courts by offering shorter sentences to those who plead guilty.

NEWS: Lead Prosecutor Assistant DPP, Adley Duncan, says a 50-percent discount contributed to Rupert Clarke's reduced sentence. Clarke– who's former Moravian Minister–pleaded guilty to having sex with two minors and has been sentenced to only 8-years in prison

The sentence reduction strategy continues to cause controversy and concern, especially after a high-profile murder case resulted in a 15-year sentence in December 2017:

This sentence reduction to speed through cases…is testing

The issue of church leaders sexually abusing young girls sparked the creation of a radical feminist movement called the Tambourine Army (so called after an activist hit the then-leader of the Moravian Church, Dr. Paul Gardner, on the head with a tambourine during a protest against Clarke's behaviour).

The pastor's case created a crisis in the Moravian Church in both Jamaica and the Cayman Islands. The church is now led by a woman, Reverend Phyllis Smith Seymour, who was appointed in January 2017, when Rev. Dr. Paul Gardner, its president, and Rev. Jermaine Gibson, its vice-president, resigned after being charged with carnal abuse and indecent assault.

Compared to the intense coverage at the time that Clarke was charged, the response by traditional media so far has been very low key.

One Jamaican summed up the feelings of many:

Disgraced Moravian pastor Rupert Clarke got a slap on the wrist with only 8 years sentence. He egregiously breached the trust and confidence of the people who look to him as a man of the clergy for moral support and guidance.

Only eight years? Very sad reality on a day like International Women's Day!! This is not progress!!

The pastor's name has been added to the country's Sex Offenders Registry, which was established in 2014. The registry is not available to the public, however. Instead, it is is housed in an office of the Department of Correctional Services, which says that it will monitor the offenders through its regional offices. Unsurprisingly, the move does not appear to have had much impact: a recent report noted that in 2017, not one institution or individual had checked any names with the registry.

The normalisation of rape and sexual assault remains a troubling one for Jamaican women. One Twitter user commented:

I remember a lady friend telling me about her experience with sexual assault. Long short, it ended with local ? laughing at her. #PoliceDontCare was her take.

Another put the concerns in a broader human rights context:

Take the time to be upset about the sentence, but just remember that poor people are the most vulnerable to abuse in Jamaica esp poor women & girls. This is the result. Let's use our sadness & work to protect them in a real way. #IWD2018

A woman who is impoverished is more likely to be abused by partners. Her children, particularly her daughters, are seen as easy prey for paedophiles who know desperation will allow them access to these girls. You mad about eight year sentences? Let's do something about it.

In a letter to the editor, human rights organization Jamaica AIDS Support for Life wrote that much more needs to be done to protect women:

If we, as a country, fail to address poverty, particularly among women and children, we only perpetuate the cycle of poverty, inequality, sexual abuse and domestic violence…

The authorities must act now and send a strong message to those who continue to harm our women and girls that it will not be business as usual. We call for the urgent revision and passing of the Sexual Offences Act and other related Acts; namely, the Domestic Violence Act, Offences Against the Person Act, and the Child Care and Protection Act. We call for an urgent revision of the Employment (Equal Pay for Men and Women) Act, which in its current state is ineffective in addressing wage disparity. We also call for the urgent passing of the Sexual Harassment Bill to not only address workplace sexual discrimination, but also to shun normalising the sexualising of our women and girls.

This International Women's Day, we press for laws that allow for social inclusion and punish those who continue to harm our women. We press for progress for opportunities that create independence for our women – disabled or otherwise. We press for progress to end all forms of violence against our women if we seriously intend to put a dent in the nearly 30,000 cases of HIV/AIDS on the island.

As International Women's Day drew to a close, it was clear that, in Jamaica at least, there remains much work to be done on behalf of vulnerable women and girls.