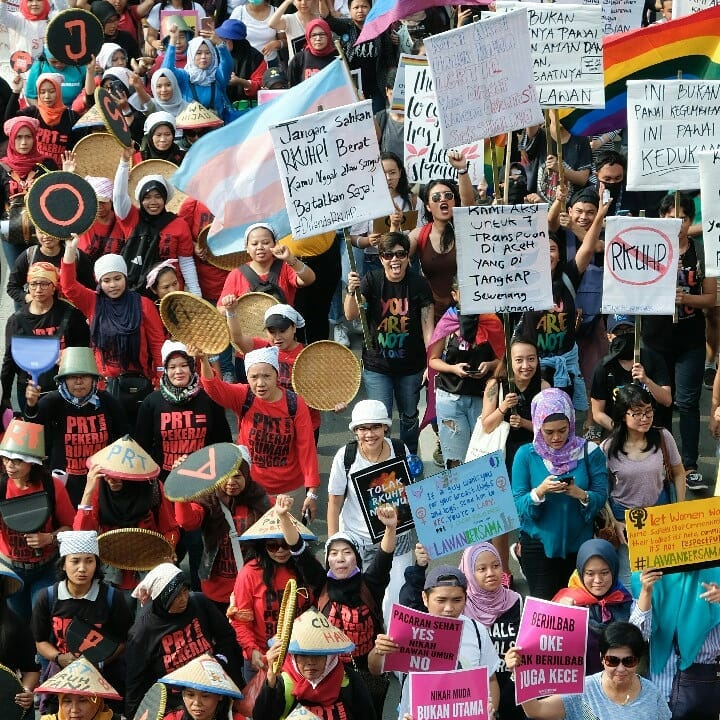 Over a thousand people joined the Women’s March in more than a dozen Indonesian cities calling for justice and protection of women’s rights. The simultaneous marches took place on March 3, 2018, a few days before International Women’s Day on March 8.

The Women's March has eight demands addressed to the national government:

Among the issues raised in the rallies was the approved amendments to the Indonesian criminal code (RKHUP) which would criminalize criticism of members of the House of Representatives (DPR). Participants also denounced the passage of legislative measures that outlaw adultery as well as the sharing of information about contraception and sexual education.

Indonesia has a Muslim-majority population and boasts the promotion of a moderate view of Islam that celebrates a diversity of beliefs to build a harmonious society. However, in recent years, hardline clerics have been pushing for the strict interpretation of Islamic teachings and their application in many aspects of governance.

Indonesia’s Women’s March was first organized in 2017, conceptualized to mobilize people from all walks of life to defeat patriarchy's influence on all aspects of society. Participants cited the persistence of feudal concepts like the old Javanese thinking that women are only good for “macak, masak, manak” (looking attractive for her husband, cooking for her family, and bearing children).

Marchers called for unity and public support for women’s rights while using the hashtag #LawanBersama (#FightTogether) on social media:

Privileged & humbled to march with so many inspiring & awesome women this morning at #womensmarchjkt #LawanBersama #jakarta #intersectionality pic.twitter.com/UA2ap0nsJC

(When) the state is busy with (regulating) crotches, corruptors laugh. #againstRKUHP #notoincoherentRKUHP

Instagram caption reads: “At the Women's March this morning. Besides voicing my opinion, what was fun about it was to meet those we rarely met due to our active life. Like these folks.”

Poster in the image reads: “Patriarchy is also men's nightmare.”

In Indonesia, underage marriages are still common despite the law forbidding parents to marry off their children under 18 years old. Indonesian child marriages are often underreported. In Kupang, the capital of East Nusa Tenggara province near Bali, a couple of teens voiced their concern and hope:

Posters in the image read: “Mama, my womb isn't ready to give birth” and “Mama, I still want to go to school.”

The Women's March on March 3 was just the first of several activities scheduled for the month in Indonesia.