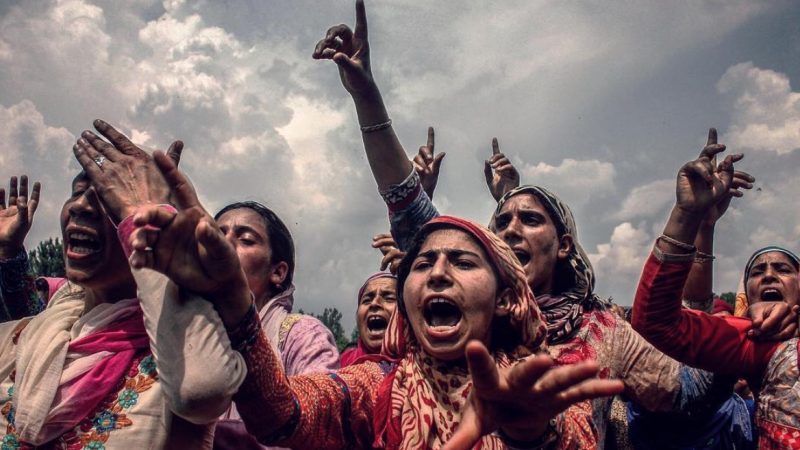 Kashmiri women shout anti-India slogans during a funeral procession of a local militant killed during an encounter with government forces in south Kashmir. Image from Instagram by author.

Six people were killed, including four civilians, during an alleged encounter between militants and the Indian army in the Pohan area of Shopian, a district in Indian-administrated Kashmir.

Officials said during the night of March 4, 2018, people they identified as militants attacked a mobile check post of the Indian army outside Shopian military base, which led soldiers to retaliate.

The killings of the four civilians have led to spontaneous anti-India protests and business shutdowns throughout the Kashmir Valley, which has been in the grip of violence since a revolt broke out against Indian rule in the early 1990s. In response, authorities cut cellphone data services in the most restive towns, and reduced connection speeds in other parts of the valley to prevent more demonstrations. Schools were ordered closed and rail services were suspended.

An army spokesperson initially reported that the check post was attacked from inside of a car and the soldiers returned fire. Inside the car, a “terrorist” and “three overground workers,” a term that Indian security forces use for people who give support to Kashmiri rebels, “were found to be dead.” The three civilians were identified as Suhail Khalil Wagay, Mohd Shahid Khan, and Shahnawaz Ahmad Wagay.

The army's insistence that Suhail Khalil Wagay, Mohd Shahid Khan, and Shahnawaz Ahmad Wagay were aiding militants was quickly contested by locals, who told independent news site Scroll.in that the young men had no links to any militant group and were killed in cold blood.

For Rawat's Army, it seems there are no civilians in Kashmir – Either you are a militant, or you are providing logistical support for militant groups. https://t.co/iCLTwJLi28

The next morning, the body of another civilian, later identified as Gowhar Ahmad Lone, 24, was found some 250 meters from the spot. Lone had been shot four times.

Lone was pursuing his higher studies at Nagpur University in the Indian state of Maharashtra. Mudasir Ahmed quoted Lone's father at independent news site The Wire:

His body was inside the vehicle but there were no blood marks on the seats or anywhere. He had a bullet injury in his back but there was no bullet mark on the seat on which he was found dead. Neither was there a single drop of blood on the seat. I believe he was killed outside his car or the forces took him to their camp and killed him there and later dumped his body in the car.

The body of another man, identified as a militant, was also found the next morning in an orchard located some 12 kilometers away from the spot.

Soon after the killings, a valley-wide shutdown call was given by leaders of the anti-India resistance. Clashes between security forces and youth were reported from several towns.

Mayhem in #Shopian! #Army shoots dead three youth Suhail Wagay,Shahid Khan,Shahnawaz Wagay all civilians travelling in a car.JRL& the people of Kashmir strongly condemn this brutality of the forces &to express deep resentment & anger will observe a complete #strike tomorrow

The state's chief minister, Mehbooba Mufti, contested the claims made by the Indian army:

Deeply distressed by more deaths of civilians caught in the crossfire in Shopian. My heartfelt condolences to the deceased’s families.

After her statement, the Indian army took a U-turn during a press briefing and said they were investigating if the killed civilians were “overground workers” or not.

#Kashmir is a place of a billion or more coverups.The old habits of the Indian Security Forces haven't died. India had never been interested in human rights or accountability. They are interested in controlling Kashmir by fear. Their miscalculation is that Kashmiris are fearless

Schools were scheduled to reopen after a three-month-long winter break, but could not due to the unrest. Resistance leader Yasin Malik was detained by the local police as he tried to take out a march against the killing in the heart of Srinagar, the state's summer capital.

Many people have taken to social media, accusing Indian media of being silent on the issue.

Except for @shammybaweja no top anchor and ‘liberal’ columnist did not utter a single word about #Shopian tragedy in which even now Army also says they were civilians. #Kashmir has been a good saleable dateline

Over the past three decades, the people of the Kashmir Valley have demanded the right to hold a referendum on their independence. In that time, more than 68,000 people have been killed in sporadic uprisings and subsequent crackdowns. The Indian military has been accused of numerous human rights violations, including the enforced disappearances of over 8,000 people.

Several inquiries ordered in such cases by the government haven’t led to any prosecutions, mainly because of the Armed Forces Special Powers Act (AFSPA) which shields the army personnel accused of extrajudicial killings. The AFSPA gives troops the right to shoot to kill; arrest anyone as young as 12 with force and without a warrant; enter and search any premise and stop and search any vehicle; occupy or destroy property in counterinsurgency operations, and detain Kashmiris for up to two years without charging them.