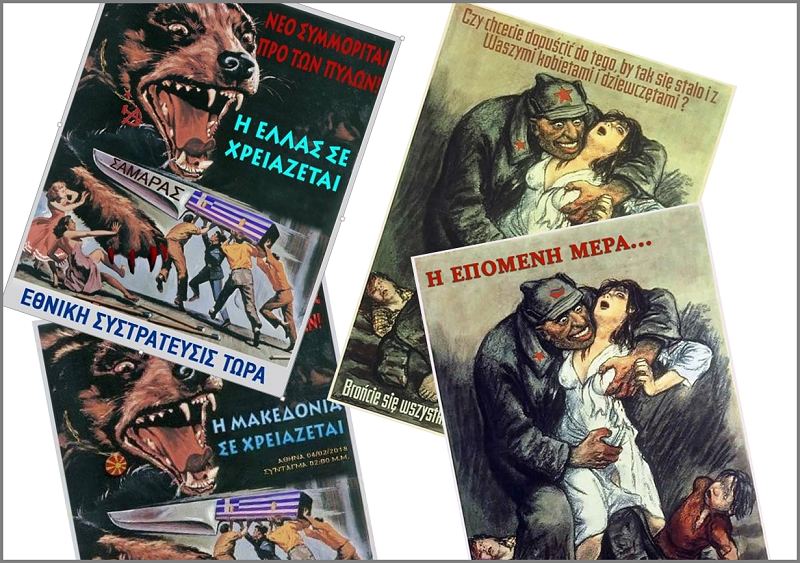 Memes based on old propaganda posters mocking Greek nationalism which had been presented as posters used by Greek nationalists used for mobilization for mass protests. Collage by Macedonian Truthmeter.mk, CC BY.

On 1 and 2 February 2018, multiple Macedonian media outlets published an inflammatory poster they said was being distributed in order to mobilize Greeks to rally in Athens on 4 February.

The goal of the rally, organized mainly by Greek right-wing representatives, was to protest any compromise in the dispute with the Republic of Macedonia over the country's official name.

At first glance, the poster appeared to contain discriminatory language and visuals against Macedonians meant to incite tensions between the two neighbors.

But the image turned out to be satirical, purposefully outrageous in its wording in order to ridicule extreme nationalism. Nevertheless, the Macedonian public was incensed because these media outlets took the poster at face value and didn’t verify the facts of who was behind it.

The fake news was debunked by the fact-checking project the Truthmeter, in an article written by Zharko Trajanoski and translated by Dragan Kucirov. Their work helped ease nationalist tensions, as number of media reprinted the analysis, and raised important questions about the risk of reproducing hate speech, even in a mocking manner.

Macedonia is at once a geographic region in the south of the Balkan Peninsula, a modern state, and a northern province of Greece.

Similarly, the term Macedonian is used to designate ethnic Greeks or Bulgarians living in their respective parts of geographic Macedonia, and ethnic Macedonians who speak the Macedonian language and consider themselves as separate people from neighboring Greeks, Bulgarians and Serbs.

And therein lies the dispute between Greece and the Republic of Macedonia over the use of the name.

Many Greeks from Macedonia, Greece's northern province, feel that their neighbor's claim to the name steals their notion of homeland and co-opts their history, which stretches all the way to Alexander the Great. As a result, Greeks refer to people from the Republic of Macedonia as “Skopjans” (Skopje is the country's capital).

Meanwhile, ethnic Macedonians in the Republic of Macedonia see the issue as an infringement of their human right to identity.

The Republic of Macedonia formed in 1944 as a state of ethnic Macedonian people and others ethnic groups living there. After it became independent from the Yugoslav Federation in 1991, Greece blocked its entry into international institutions such as United Nations, NATO and European Union over its use of the name.

The Republic of Macedonia conceded to some Greek demands at the time, including replacing the ancient Macedonian sun symbol from its flag with a more modern version and agreeing to use the temporary designation of “Former Yugoslav Republic of Macedonia” in some international bodies.

A process of mediation under the auspices of UN had been under way for the last 23 years. During recent months, negotiations to resolve the issue have intensified thanks to both countries’ more liberal governments.

‘Komitadjis at the gates! Macedonia needs you.’

But extreme nationalists on either side of the border consider any compromise as treason. In this context, two massive protests recently took place in Greece's biggest cities: in Thessaloniki on 21 January and in Athens on 4 February, under the slogan “Macedonia is Greece.”

While the exact number in attendance is subject to debate, it's undeniable that both drew crowds of tens of thousands of diverse participants: from leftist icon composer Mikis Theodorakis, who made a speech in “defense of Greekness of Macedonia,” to far-rights extremists who perpetrated acts of violence.

And it was supposedly for these protests that the hateful poster was circulated — or at least that's what Macedonian news organizations misreported.

It showed a group of men jointly stabbing a giant dog with a knife branded with Greek symbols, warning that they have to defend Greece from “komitadjis” — members of the late 19th- and early 20-century Macedonian revolutionary movement which opposed Ottoman and later partial Greek rule in the region of Macedonia, and which was at times sponsored or undermined by other Balkan states, primarily Bulgaria and Serbia. 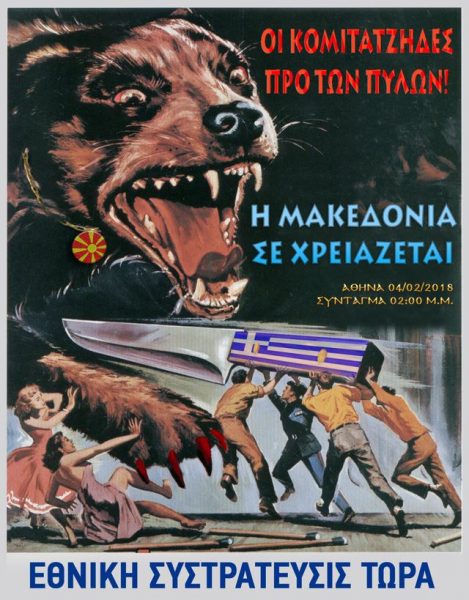 Several Macedonian media outlets reported on the poster as if it had indeed been distributed in Greece's streets using titles like “How the protest in Athens is announced: All together now, the comitadjis are at our doorstep (PHOTO)” or “Brussels is silent about the hate speech and the burned Macedonian flag during the protests in Thessaloniki”.

From there, multiple intellectuals and journalists contributed to the sharing of the “shocking” image on social media. A well-known national TV editor wrote, “The Greek hysteria against Macedonia gains monstrous forms… This is a call for butchery – as opposed to the Macedonian’s gesture, to rename the motorway into ‘Friendship'…” 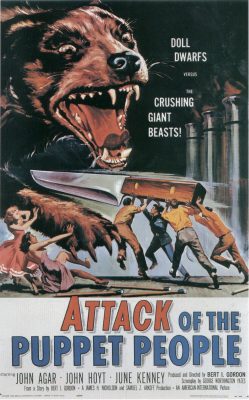 Poster for the 1958 film “Attack of the Puppet People.” Public domain, via Wikipedia. A copy of the film is available on YouTube.

Given that Macedonian media outlets were presenting the poster as hate speech, which can incite violence, Truthmeter decided to check out the story.

Analyst Zharko Trajanoski first started running searches on Google Images, where he found that the supposed protest leaflets was an edited version of a poster for the 1958 film Attack of the Puppet People (1958).

Digging deeper, it turned out that the source of the modified image was a Facebook page called “Ελληνο-Χριστιανικό Ethnostedon” (Greek-Christian Ethno-Sedative), dedicated to social satire.

Moreover, the page had photo-shopped numerous other old propaganda posters to make a statement.

For example, on 11 March 2014, they published the following photo-montage, using the same film poster as a model. This version caricatured right-wing politician Antonis Samaras, who was serving as Greek prime minister at the time, as a safeguard from the communist menace: 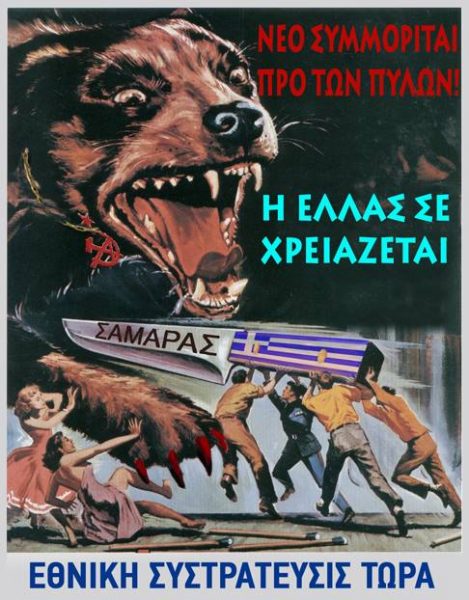 Satirical meme by Ελληνο-Χριστιανικό Ethnostedon from 2014 about Samaras. “Neo-Ruffians to the gates! Hellas needs you!! NATIONAL RALLY NOW.” The knife reads “Samaras”, the prime minister's surname.

The page also contained another photo-montage, similar to a poster that Macedonian media had claimed was for the January rally in Thessaloniki: 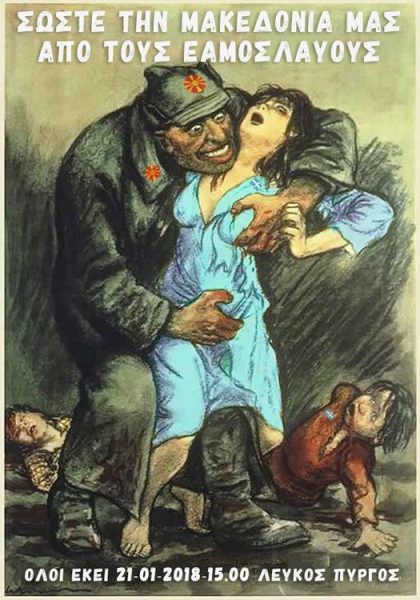 Satirical meme by Ελληνο-Χριστιανικό Ethnostedon based on an anti-Soviet poster from 1921. “SAVE OUR COUNTRY FROM THE EAMites Slavs. Everybody, be there 21.01.2018 15.00 White Tower.” EAM refers to the National Liberation Front, the main movement of the Greek Resistance during the Axis occupation of Greece during WWII. Made up of mainly the Communist Party of Greece and other leftist groups, EAM began to experience persecution in late 1944, which eventually led to the outbreak of the Greek Civil War.

But this time, it had text that ridiculed Samaras, and was published on 9 May 2014.

Both were modeled after an anti-Bolshevik propaganda poster used in Poland in 1921. In the 2018 photo-shopped version, the red star — the symbol of communism — was replaced with the sun from the flag of the Republic of Macedonia. 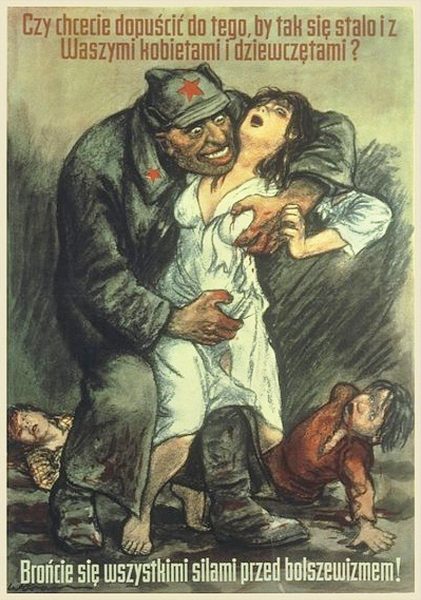 Polish anti-Bolshevik poster from 1921. The text reads: “Do you want to allow this to happen to your women and girls? Defend yourself against Bolshevism with all your might!”

“Greek-Christian Ethno-Sedative” is not alone in using such vintage posters for political discourse in Central and Eastern Europe.

For instance, a montage based on that poster was used by Polish newspaper in an anti-Russian context in April 2017.

And a magazine called “History without censorship” published a photo-montage in which the face of the raping Red Army soldier was made to look like Russian President Vladimir Putin. Apparently, it's symbolism is well known in Poland and possibly other neighboring countries like Ukraine.

The Truthmeter researcher wrote a private message to the admins of “Greek-Christian Ethno-Sedative” to tell them that two of their creations had been shared with misinformation, causing an uproar in the Republic of Macedonia. An administrator replied:

Humor through exaggeration. I think It is obvious for the Greeks. We choose to show posters that overemphasize the nationalistic and religious tendencies using a grotesque and old-fashioned background in order to deconstruct them. We are not nationalists, we are just joking. Thank you for your interest and sorry if you feel insulted.

So what caused so many to see hate speech in the posters, instead of humor? One commenter, Spyros Sofos, thought it came down to the degree to which Greeks and Macedonians are estranged from each other:

Truthmeter analyst Zharko Trajanoski noted that probably the biggest part of the problem lies with the Macedonian news organizations: Seemingly caught up in nationalistic paranoia, they presented the posters as hate speech without first tracking down the source and verifying the context in which they were published and the intentions of the author.

After Truthmeter published their analysis, several media outlets in the Republic of Macedonia republished it or reported on it, including some of those which originally published the misinformation. However, none of them issued an open retraction or an apology for misleading their readers.

And in Greece, several websites like Ptisi Diastima and anti-hoax website Ellinika Hoaxes pointed to analysis and commended Truthmeter for its debunking work.