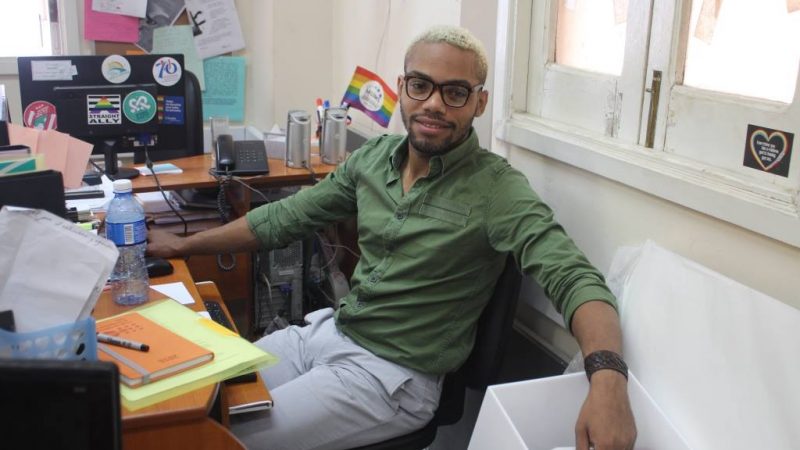 “The debate is not whether people want to get married, but rather that people have the right to use that institution whenever they want. Nobody gets sick every day, but in Cuba, it's safe to say that a hospital will never leave you lying at the door for being black, lesbian, or poor. It’s about being covered and protected under the law.” Photo of activist Ulises Padrón Suárez, courtesy of Padrón.

Ulises Padrón Suárez is the young founder and coordinator of the Youth Network for Health and Sexual Rights of the National Center for Sexual Education (CENESEX) in Cuba. Before joining the institution, he participated in courses and workshops taught there, transforming him into a health advocate and seasoned activist. After seven years of activism, Global Voices (GV) is interested in hearing Suárez’ opinions about same-sex marriage which is still illegal in Cuba, yet becoming an increasingly more important issue in the country.

Global Voices (GV): I assume you are interested in there being a way for people of the same sex to legalize their relationship in Cuba; in your opinion, why should this possibility be considered?

Ulises Padrón Suárez (UPS): Unfortunately, public opinion in Cuba continues to be that marriage between people of the same sex/gender should go to a referendum before becoming law, as if this approach weren't crudely manipulated by the hegemonic and heterosexist consensus of the insular establishment (where you'll find not only the power elite, but also academics, journalists, among others). However, in our society, LGBTQIA [Lesbian, Gay, Bisexual, Queer, Intersex, Asexual] people and groups are becoming more visible and, of course, demands are gaining strength in the public sphere. Ignoring them or not giving them the attention and respect they deserve is to deny the full rights to citizens who find their social action limited.

Addressing human rights in Cuba has invoked a series of conflicts for organic legal knowledge and expression (which we are still far away from) between activists and government decision-makers. Accordingly, although the country recognizes, covers and protects an important set of rights (health, education, culture, employment), there are others that fall to the wayside in the current national and regional situation.

GV: Do you know of any case in Cuba or an anecdote in which people who, because they were not legally married, suffered some injustice?

UPS: Yes, couples, in which one of the two dies and the family of the deceased strips the survivor of all of their common assets because there are no regulations protecting against these situations.

GV: Do you think there should be a referendum to decide whether or not marriage should be legal in Cuba between people of the same sex/gender?

UPS: I don't think so, no. I believe that it should become a law directly, and an institutional infrastructure that secures and protects this and other rights should be built. Marriage legalization, legal unions, or whatever you want to call it must be non-discriminatory and broad enough so that all citizens can enjoy it.

GV: We know that in the proposal of the new Family Code, which has not yet been presented to the Cuban parliament, Equal Marriage is not included but “consensual union” is proposed. What is your opinion about that?

UPS: It's discriminatory! Above all, if we understand that our State has been secular since 1901 and therefore, all of us should have the same institution to formalize our union, that is, marriage — without adjectives, without qualifications.

Marriage is also not the panacea and, as a heteronormative institution, it has been in crisis for centuries. All of us will have to think of alternative institutions that recognize polyamory, for example, or make asset protection more humane in the face of conflicts due to death, family or the State.

GV: Commentator Ernesto Martínez Hernández stated in the article “We Have to Stop Looking at Ourselves in a Segmented Way,” by journalist Lisandra Fariñas, published in the newspaper Granma (an entity of the Communist Party of Cuba) writes: ‘Allowing gay marriage is disrespectful to society, just like allowing legal contracts between people and animals is not normal. It should not be legalized because it is not natural. [Correction] There are couples who live their whole lives without getting married [why] fighting to legalize something that is not normal by nature? How would you respond to this commentator?

UPS: I couldn't find the article, I imagine they took it down for not being “politically correct.” But his disrespect and ignorance are egregious.

What’s normal has been imposed by men (historically speaking), therefore, it can change, like in the middle ages when it shifted from the Ptolemaic paradigm to the Copernican. It has to do with where you align and the alliances you make. Otherwise, you cannot have a conversation with that man. I really hope he’s not zoophilic.

The debate is not whether people want to get married, but rather that people have the right to use that institution whenever they want. Nobody gets sick every day, but in Cuba, it's safe to say that a hospital will never leave you lying at the door for being black, lesbian, or poor. It’s about being covered and protected under the law.