In Damascus, Solidarity with Besieged East Ghouta is Dangerous 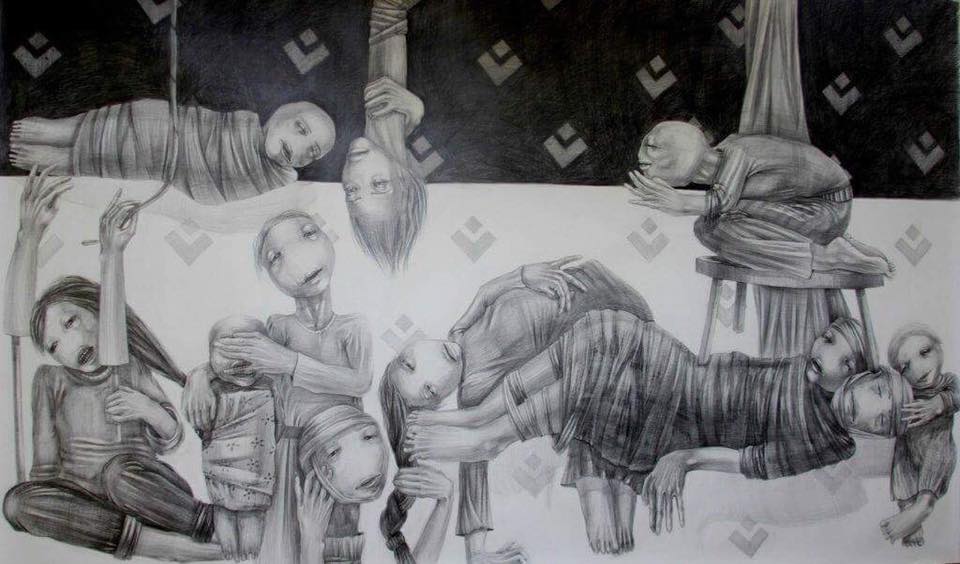 The following is a series of testimonies from Damascus. It comes following two testimonies from Eastern Ghouta (in the suburbs of Damascus) by a nurse and a dentist, published on February 20 and March 4, 2018, respectively, and published by the Act For Ghouta collective.

Controlled by anti-regime rebels, Eastern Ghouta has been under siege by the Syrian regime and its allies since the end of 2013. But in recent weeks, the violence intensified drastically. Over 120 people have been killed between February 6 and February 8 alone, and February 19 saw the death of over 110 people in a single day. Since February 18, over 650 people have been killed, more than 150 of them children. Civilian infrastructure has also been severely damaged, with more than 25 hospitals and health centers hit, some more than once in four days.

The humanitarian catastrophe in Damascus’ Eastern Ghouta suburbs continues to unfold as Syrian and Russian forces push ahead with a military operation against the rebel enclave under the Syrian government siege since 2013.

Since Feb 2018, 650 people have reportedly been killed. The death toll continues to climb amid relentless ground and aerial bombardment and massive damage to infrastructure. Gruesome footage from inside eastern Ghouta arrives thick and fast, offering a glimpse into the gravity of the situation and the suffering of people there.

On social media, supporters of President Bashar al-Assad issue pleas for the Syrian military to halt rocket attacks on the capital Damascus, referring to those sent by rebels in East Ghouta, which have surged since the relentless Ghouta offensive by the regime began.

Syrian state media has aired interviews with people on Damascus’ streets disgruntled with frequent rocket attacks hitting their city who say they blame the rebels in Eastern Ghouta. They urge their government to ‘stamp out rebel attacks.’

The regime's despotic rule and ubiquitous security agents make it nearly impossible to gauge the scope of the opposition to the Ghouta offensive inside Damascus. Although hard to find, many hushed voices have emerged. The majority remain silent as the regime maintains a military upper hand.

Salam (not her real name), a mother of two living in Damascus, tells Global Voices that her son is developing a phobia from living in constant fear:

My two year old son cries hysterically and clings fast to me when a warplane flies overhead or when an explosion occurs…He has developed a phobia.

She adds that life has gotten difficult in Damascus due to rebel rockets, and that she can't imagine how it must be in Ghouta:

Since the Ghouta operation began, we have been hearing explosions of unusual intensity…the passing of a plane overhead makes buildings shake. It blows my mind to imagine how mothers in Ghouta are coping. If I were there, I would have gone berserk. I am a mother and I understand how mothers feel. I have been watching videos and following Facebook posts from Ghouta mothers. It is impossible for me to not empathize.

Rockets and shells have disrupted life here in Damascus. In some neighborhoods people are no longer sending their children to schools. Just imagine how life is there. Civilians on both sides are paying the price. This madness has got to stop.

Ahmad (not his real name), a government employee originally from Harasta in Eastern Ghouta, left for Damascus with his family soon after the government crackdown on protests in his hometown began. Ahmad spends most of his time glued to his laptop to follow developments in Ghouta and now lives in constant fear for the lives of his relatives as well as workplace paranoia in Damascus:

I have relatives and friends in Eastern Ghouta. They keep posting updates of their hellish conditions on social media. I have already lost three friends since the operation started.

Employees from Ghouta are closely monitored. You have to be careful to not even show sympathy. You have to weigh your words carefully.

When asked what consequences there might be, Ahmad said:

You risk being suspected of having links with ‘terrorists’, you can lose your job if someone tips you off. You risk even detention. Generally speaking, there is a tacit understanding that silence in the safest thing you can do.

He described not knowing how to react when co-workers call for ‘wiping Ghouta out':

When co-workers complain about shells and rocket attacks and call for ‘wiping Ghouta out’ in retaliation for the rockets, all you can do is grin and bear it. I feel deeply embittered. I have friends and relatives there. I have my house which I am sure is a big pile of rubble now. I have my childhood and youth memories there.

Deep down I know I am a coward. But there is nothing we can do. They have military might on their side. Even the UN [United Nations] and international community have proved inept. We are trapped in our helplessness.

Omar (not his real name), a university student who hails from the Qaboun district near Damascus echoes his thoughts:

Back in 2006, I vividly remember when we received a Lebanese family who fled the Israeli war in our house in Qaboun. I remember my brothers engaging in solidarity stands and fundraising for the people of Gaza during Israeli operations. With Ghouta, we are denied the luxury of showing solidarity. I envy people from across the globe who can join protests and shout at the top of their voices in solidarity with Ghouta.

Omar says he set up a fake Facebook account to engage in online campaigns and share accounts by people from inside Ghouta. Active on social media, Omar says he translates accounts, posts and videos of besieged people in the hope of “galvanizing public opinion into action”.

Whenever you turn a blind eye to this tragedy, a boom brings it back to your senses. There is no ignoring it…Geographical vicinity, kinship and humanity dictates it.