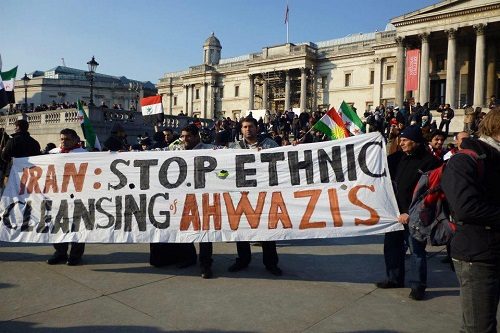 Stories of unlawful, unjust arrests and even deaths in prison have been making headlines on the heels of Iran's winter protest movement. Demonstrators initially railed against the country's stalled economy and the massive price hikes on the cost of basic food items, but the movement soon snowballed into outspoken criticism of Iran's leadership.

The recent, mysterious death of Dr. Kavvous Seyed Emami, a non-political academic and environmental activist, caused much uproar. While such tragedies are shocking to many, similar incidents have been occurring amongst Iran's Ahwazi Arab population, with much less attention, for years.

Over 5 million Ahwazis exist in the provinces of Khuzestan, Bushehr, Hormozgan and Qeshm Island, a region they call “Ahwaz”. Despite living in the area which holds over 95% of Iran's oil and gas resources, Ahwazi Arabs live under discrimination and poverty. Viewed as inferior because of their ethnicity, most exist below the poverty line, with limited or no access to employment, education, healthcare, or basic utilities.

The community has suffered in silence, persecuted by Iran for almost a century. Compounding this problem is the media blackout surrounding events in Ahwaz. Ethnic cleansing is routine, with hundreds of thousands forced from their homes without warning or compensation.

Now, according to statements from the families, officials are refusing to hand over the young men’s bodies or even to tell them where they are buried. Their family members are also being threatened with imprisonment if they hold traditional funeral rites for their loved ones, who are suspected to have died from the torture that was meted out to them during their detainment.

Moussawi was a political, cultural and human rights activist, popular and well-respected in his Al-Thawra neighborhood of the regional capital, Ahwaz, because of his tireless campaign for the freedom of the Ahwazi people. He promoted the Arabic language and educated the youth about the region’s rich Arab heritage. Moussawi had previously been arrested — in 2005 and 2007 — on account of his activism.

Haradani, who hailed from the city’s Mandali neighborhood and did similar work, disappeared last October. Their peaceful activism roused the ire of the authorities, which forbid Arabic-language education, despite it being the native language of the Ahwaz region’s indigenous Arab peoples. Traditional Arab dress is also banned.

The men were both seized by agents of the Revolutionary Guard in 2017. For months, they were prevented from contacting their families. Authorities were vague about the charges laid against them, withheld information about their whereabouts, and only disclosed that the men had been executed when they summoned the activists’ families to Ahwaz for a February 14, 2018 meeting.

In a heartbreaking phone call, the widow of Sayed Rahmani Moussawi told Global Voices that the torment began when her husband was abducted by regime forces in mid-June 2017, during the observance of Ramadan. His family received no notice that he had been arrested, but they felt sure that Rahmani — the father of three young children — was being targeted because of his advocacy for Ahwazi rights. Mrs. Moussawi said that not knowing whether her husband was alive or dead was “agony”:

We searched for him at all the relevant government agencies, but we were unable to get any information. On Thursday, we were summoned by the regime intelligence services, and they informed us that he had been executed.

Despite knowing that she and her children might be targeted in retaliation, she lamented the Iranian authorities’ cruel persecution of her husband in the years before his death:

My husband was innocent — all he did was to raise awareness of the regime’s policies aimed at eradicating Ahwazi people from our homeland by every means, including wiping out our language.

As she spoke, she regularly stopped to regain her composure as her grief, still fresh, overwhelmed her:

He organized various Arab celebrations in our home to teach people about the importance of protecting our Arabic language and identity. These cultural and civic activities led to regime agents having him dismissed from his job at many places, and blacklisted so that when he applied for job positions in many areas, the recruitment staff would tell him, ‘Sorry, we’re unable to hire you for security reasons.’

I still remember when he heard those words, his tears came rolling down his cheeks and he said, ‘Sure, I’m going to do that.’

Then he came to me and asked me, ‘Do we have dinner to break our fast?’

I told him, ‘We have tea and bread.’  He wept a lot and he gently hit his head against the wall in frustration, then he went out, saying ‘I’ll borrow money from my friend and I’ll come back.’

Those were his last words to me, and the last time I and my children saw him. We waited for hours, days, weeks, months, and we searched everywhere, but no news and no trace of him was found.

She also talked about the moment she learned that her husband had been executed in regime detention:

They didn’t tell us what he did, what the charges against him were, where his trial was, why they kept us in the dark about his detention. It’s very likely that they killed him under torture when they were trying to get false confessions to try to link him to something — when they couldn’t, they killed him, and to cover that up, they say he was hanged.

Mahdi Haradani's family was given a similar peremptory notification of his death in regime custody, with intelligence officials refusing to disclose the charges on which he had been tried, or to release his body.

Such horrific cases have become the norm rather than the exception for the people of Ahwaz, with activists routinely “disappearing”, only for their families to discover, months later, that they have been seized and held in the regime’s infamous secret prisons — either killed under torture, or sentenced to death and quickly executed following  farcical “trials” on false charges such as “Moharebeh” (“enmity to God”). Such “trials” meet no standards of international law; they are staged simply for the sake of appearance, with the accused denied access to lawyers and the verdicts already decided.